Psalm 124 is another short but powerful Song of Ascent. A step higher.

The previous psalm expressed a deep sadness; that of one enslaved who is vulnerable and uncertain of his or her fate at the hand of perhaps an unkind master or mistress. The psalm ended with a helpless sigh, as if the psalmist was too overwhelmed to continue to pray. “Too long has our soul been sated with the scorn of the complacent, with the contempt of the proud.”   Now, as the Levitical singers take the fifth step upward, drawing closer to the Holy Place of the Temple,  a surge of hope and faith is extended to those who suffer the negativity of their opposers.

Both on an individual and a communal basis, David describes an experience of salvation. From the depths of man’s inhumanity to his fellow man, as the people of Israel have experienced at the hands of the nations through history, to the personal experience of injustice perpetrated by the strong and proudly self-righteous against those weaker, the Lord indeed has acted and constantly is able to raise one up and provide a way of escape. David repeats for emphasis and in wonder, “Were the Lord not for us!” Clearly, God is the sole source of salvation. His absence would surely have meant their destruction, for they were totally at the mercy of man – of those who were not “for us”  but whose attitudes and actions would have “swallowed us alive” (v.3).

David employs striking metaphors to describe the threat to life and well being that result when angry men rise up against one. Being “swallowed up” indicates being consumed, having no recourse other than death. It calls to mind Jonah and the big fish (2:1) or Psalm 69:16 (15), “Let not the flood water overflow me, nor the deep swallow me up.” The metaphor of drowning is clarified in verses 4-5. Literary author, Ludwig Strauss, notes that these three middle verses describe a world without God, and He is not mentioned.*  Also, interestingly, the chiasm, or pattern, of threats in these verses (waters – over our souls – over our souls – waters) is paralleled by a chiasm of salvation in verse 7, (escaped – snare – snare – escaped).

Encompassing it all, as proclaimed in the first and now in the last verse, is the unseen Presence of God and His faithful acts of salvation to those who call on Him in their distress. “Our help is in the Name of the Lord, Creator of heaven and earth.”

Blessed is He who, in accord with His will and purpose, opens a door and makes a way, even when there seems to be no way. He enables our souls, when entrapped in the fowler’s snare, to escape and to fly free – for His glory! 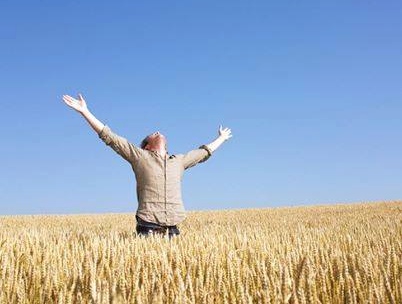