“But thou, Israel, my servant, Jacob whom I have chosen, the seed of Abraham my friend, thou whom I have taken hold of from the ends of the earth, and called from the corners thereof, and said unto thee,
“Thou art my servant, I have chosen thee and not cast thee away; fear thou not, for I am with thee; be not dismayed, for I am thy God; I will strengthen thee; yea, I will help thee; yea, I will uphold thee with the right hand of my righteousness.
Behold, all they that are incensed against thee shall be put to shame and confounded: they that strive with thee shall be as nothing, and shall perish. Thou shalt seek them, and shalt not find them, even them that contend with thee: they that war against thee shall be as nothing, and as a thing of nought.
For I, the Lord thy God, will hold thy right hand, saying unto thee,
‘Fear not; I will help thee. Fear not, thou worm Jacob, and ye men of Israel; I will help thee,’ saith the Lord.
Thy Redeemer is the Holy One of Israel.

Was it the prophetic word of God, Himself, which was fulfilled in 1948 and ’49, when miraculously Israel was recreated? Was the return of Jerusalem in 1967-68 to the Jewish people, another fulfillment of His word, and the words of Jesus in Luke 21:24, when He said that “Jerusalem will be trodden down of the Gentiles, until the times of the Gentiles be fulfilled.” This means that the times of the Gentiles has come to an end. It may not seem so, looking at the physical scene, but as far as God Himself goes, those times are finished, and we have entered the last phase of world history.

Was the regathering of the exiles from the far corners of the earth a divine fulfillment of His word? Was the protection and triumph of Israel in ten wars, since 1948 due to God’s unfailing faithfulness to His word, and the covenant He made with our forefather, Abraham? Was the recreation of the fertility of the land, from arid wilderness, and malarial swamps, and the restoration of the ecology–and the rebuilding of the ruined towns and cities, the rebuilding of the national institutions, such as Army, Air Force and Navy, the police and security? …and so we could go on. The reinstitution of the Sanhedrin in today’s Knesset–further evidences of the hand of God in human history.

[Looking at the present political global scene] It seems to me that all of this is up for destruction, but for the mercy and faithfulness of God. We [here in Israel] need those believers who will stand in the gap and plead that God Himself will arise and scatter His enemies. It must surely be a great comfort and strength to those of us who intercede for Israel, that if the regathering of Israel–these many marvelous promises which have been fulfilled, the survival and triumph of Israel in the continuous war situations of our modern history–if it is the living and abiding word of God which has been fulfilled, then the Almighty Himself will defend that word of His. After all, those who are seeking to withstand His word and to destroy it and its fulfillment, are on a collision course with God–no matter how great and powerful they may be.

Like Daniel, we need to stand upon the word of God, when all seems to be against it, and pray His will into being. Read Daniel, chapter 9. This so-called “peace process” between the Palestinian Authority and Israel has deeply divided Jews–not only Israeli Jews, but also Jews in the Diaspora. The strains are seen even in Israel’s coalition government under Netanyahu. It is a division between those who believe in God and those who are secular. If you believe that God’s word is GOD’S WORD, and the covenant He made with Abraham is still operative, whilst a seed of his is on the earth–a seed through Isaac, not Ishmael–and Jacob, not Esau (see Psalm 105, verses 8- 11), you will have an enormous problem with “land for peace” and the “two-state solution,” and so does the Almighty.

It is impossible to set aside as “politically unacceptable” – a covenant which God Himself made, without serious consequences. …Very sadly, the result of the paganization of Western nations will be that they will be more and more hostile to Israel. Whilst Israel remains faithful to the word of God, they will feel that it’s something old fashioned, narrow minded, and legalistic. The fact is we see it already–in the BDS moves to boycott Israeli goods and produce, in the moves to ban circumcision and kosher preparation of meat in a number of countries in the European Union. …It is not a small matter that anti-Semitism is growing at an alarming rate in nearly all of the Western nations.

In the midst of the storminess and crisis for Israel and the Middle East a ray of glorious light is shining through the gathering storm clouds. By the grace of God, a miracle is taking place. Continued aliyah from across the globe. For example, one of the genuinely lost tribes of Israel, the tribe of Manasseh, exiled by the Assyrians in 722 BC, is coming home after 2,736 years of exile. In January 2014, 38 members of Bnei Menashe, arrived at Ben Gurion Airport in Tel Aviv. Over the last year, 300 came home, and another 860 are expected to arrive in the next 15 months. By early 2015, there will be 3,000 of the Bnei Manasseh, living in Israel as citizens.

The International Christian Embassy in Jerusalem covered most of the cost of the immigrants’ flights, and Christians for Israel, Bridges for Peace, and Operation Exodus are provided funding for their absorption.

May the God of Israel richly bless these groups of Christian believers who have supported the return and do many other works of kindness and support in the Land. 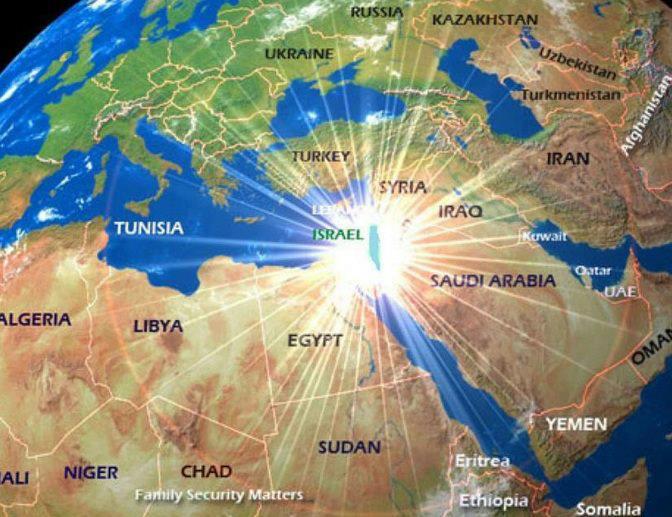