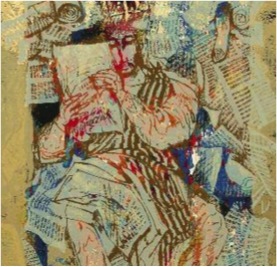 Making the ascent to the eleventh step, David is overcome by the awareness of his own weakness and the remnants of sin in his human nature. He has faced the blatant wickedness and the painful persecution of his enemies with strength and resolve; now, as he takes another step closer to the Shekinah Presence of G-d, sheltered in the Holy of Holies, he is aware of how far his soul still must climb to attain the holiness his spirit longs for.  In comparison with the holiness and beauty for which he was created by the Holy One of Israel, he acutely feels the depths of his own fallen humanity.
The psalm thus expresses King David’s only-too-human reflections on repentance and forgiveness, doubt and assurance, distress and optimism. Qualities that succinctly, and humorously, are reflected in a Yiddish saying: “Please G-d! Help me get up! I can fall down by myself!”

The main body of the psalm is personal in application. Verses 2 – 4 are a plea that the Lord will hear his cry for mercy and he declares, “Forgiveness is Yours.”  The declaration affirms the reality that, while in imitation of Him we need to forgive one another’s sins and failings in our interactions on earth, only G-d is the ultimate source of full forgiveness.  This truth is powerfully illustrated when the prophet Nathan confronts David over his adultery with Batsheva and the murder of Uriah her husband. In the shock and realization of the scope of his sin, David said to Nathan, “I have sinned against the Lord.” And Nathan said to David, “The Lord also has put away your sin; you shall not die…” (2 Samuel 12:13-14).

The central themes of sin, repentance, forgiveness and redemption, and the concept of “waiting on the Lord” for His response and assurance, all emphasize the need for, and the possibility of, communication with our Father in Heaven. The beautiful metaphor in verse 6 of one waiting on Him “more than the watchman waits for the morning,” captures the experience of the night watch. The “dark night of the soul” is a time of despair at sin, whether in oneself – calling for repentance and acceptance of forgiveness – or in those around us – calling for forgiveness and intercession on their behalf.

It is a lonely, dark time that can include moments of fear and a strange combination of anxiety and peacefulness. Underlying it all is the certainty that, no matter how long the hours of waiting may seem, the dawn will break through. In the constant faithfulness and lovingkindness of our G-d who redeems, the first rays of light will break through the darkness and the morning will come.

Therefore, when we cry out to G-d from the depths of our trouble, and of our hearts, we can do so in hope and with trust that He hears our cry. The Hebrew word kiviti, in verse 5,  is derived from the same root as tikvah – hope. The national anthem of the modern state of Israel is ‘HaTikvah‘ – ‘The Hope’, which alludes to the trust in the promise that the rebuilding of the Land of Zion and Jerusalem by a free Jewish people is the step towards G-d’s full redemption of Israel and the nations.

Indeed, in the last two verses, David moves the focus from himself to Israel. As their king, he feels inextricably bound up with his people and the cry from his heart is as much on their behalf as for himself. In a stirring plea and prophetic word of proclamation, he concludes with a prayer our hearts can deeply affirm today:

“O Israel, hope in the Lord!
For with the Lord there is steadfast love, and with Him is plentiful redemption.
And He will redeem Israel from all his iniquities.”