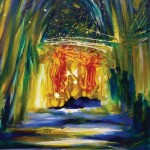 This parasha outlines the dietary laws and lists the foods that are kosher (fit to eat as food) and those that are not. Why should we bother with the laws of kashrut at all? People can offer good reasons: The commands were given by God. They have proven to be good for one’s health and afford protection from certain diseases. They offer those who serve the God of Israel a mark of personal and group identity. David Blumenthal offers an interesting point, in his book, God at the Center, Meditations on Jewish Spirituality, he says: “They are part of a mystery and create a sacramental aura to all eating.”

Blumenthal adds a further intriguing reason, with reference to the teachings of Levi Yitzchak on the words of Nachmanides, (the Ramban) another renowned medieval commentator, who said: “The reason the Torah forbade us these animals is that… in the future the Holy One, blessed be He, will speak with each person of Israel, as it says: “Your sons and daughters shall prophesy” (Joel 3:1). Levi Yitzchak noted: “From this we learn that… it is not fitting that the mouth which will speak with Him should eat forbidden foods. According to this view, keeping kosher is a way of preparing oneself by cultivating the bodily habits that will make one a fit vessel for the Divine Presence.“

This serves to highlight the significance of the mouth. The words we speak are of supreme import and can carry life or death. The mouth also is a conduit for life-maintaining sustenance to the body. As Blumenthal emphasizes: “What one eats counts. What one says counts.”

Tazria contains lengthy discussion of the states of tahor and tamei – being ritually pure or impure. The conditions whereby a person could be proclaimed tamei, were somehow linked with sin and/or death.  For example, if someone touched a dead body they were rendered tamei for a day and needed to wash themselves and their clothes before being tahor once more. In this case there is no sin involved. Unless, God forbid, they had committed murder! If a person developed a certain skin affliction or their house had a mold like growth on the walls [not regular disorders, but ‘supernatural’ growth identified by the kohen] they and it were declared tamei and cleansing procedures were to be followed. These rituals all served to impress upon God’s people the spiritual reality that sin and death are in opposition to life and righteousness. The profane conflicts with the holy, and they cannot coexist. Sin separates us from the life of God’s Presence.

As it was then, the challenge of walking in the Kingdom of God, which is Life, as opposed to the kingdom of darkness, which is death, is constantly before us  and our daily choices affect our eternal rewards.  We can rejoice that our Father God has given us the victory over sin and death through our Lord and Messiah Yeshua. The elements that would render us tamei are done away with in Him and, as we follow after and abide in Him, nothing can separate us from the love of God.

A metzora is not technically a ‘leper’ as the word indicates today, rather it is one who was sent outside the camp or community for a set time once they were declared ritually unclean by a kohen (priest). The condition basically was a spiritual one; in particular, according to ancient Jewish commentary, the sin of lashon ha’rah – undue slander and gossip stemming from arrogance.

A clear illustration of this is included in the purification ceremony we see described in this week’s portion. Once the metzora has repented and is declared healed by a kohen, he is able to return to the community after seven days. On the eighth day he brings offerings to the kohen and regains admittance into the Holy Temple – the Sanctuary of the Presence of God. We read in Matthew 8:2-4 how Yeshua healed a leper/metzora and then sent him to a kohen to complete the final ritual.

The kohen completes the purification by anointing – first with blood of the guilt offering then with oil – the metzora’s right ear lobe: indicating his willingness to hear God’s Word; the thumb of his right hand: submission of his actions to God; and the big toe of his right foot: submission of all his “comings and goings” to the Lord. Finally the kohen uses the remaining oil to anoint his head, indicating that his mind and whole being now are yielded to God.

Acherei Mot – After the Death

In the biblical Festival Cycle, the Day of Atonement, or Yom Kippur, takes place at the holiest place in the world on the holiest day of the year. This is the only day that the High Priest entered through the curtain that separated the Holy Place from the Holy of Holies – the inner sanctum that housed the Ark of the Covenant. He took with him the blood of the offering, which he sprinkled on the cover of the Ark and in front of it. This was an awe-inspiring part of the Yom Kippur ritual. If the High Priest, in this case Aaron, did not enter the Holy of Holies in a state of purity, tahor, he stood to suffer the same fate as his sons, Nadav and Avihu, to whose death the title Acaherei Mot refers. It is said that, as a precaution, a cord was tied to one of the High Priest’s ankles so that, in the event of his death, the priests could retrieve his body!

Yom Kippur, however, is not the focus in this parasha. The emphasis rather is upon the role of the priests and their responsibility in preparing and purifying themselves and the Sanctuary for the awesome occasion. A passage from the parasha: chapter 16:4ff, is the Torah reading for the Yom Kippur morning service in synagogues. The passage is located in the annual reading cycle exactly six months before and six months after Yom Kippur. This indicates that, as the redeemed of God, it is fitting to walk throughout the year in an attitude of repentance and in awareness of our dependence upon the One who is the giver of, the reason for, and the purpose of life itself.

Based on A Taste of Torah available via FFOZ.com