For after all, if there’s a place in this world that can make you cry, isn’t that where you ought to be? 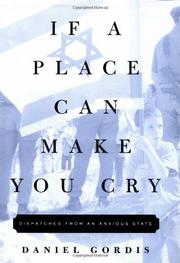 Since updated and Republished as Home to Stay

Daniel Gordis and his wife Elisheva took their family to Israel for a year during the hopeful promise of Oslo. As parents, they were surprised to realize that their children were safer on their own in Jerusalem than they had been in the States. This was a time filled with promise and hope and Daniel firmly believed that peace was imminent. A few months into the year Daniel and his wife, Elisheva, made the decision to make their visit a permanent stay. They had found a place they could call home.

Just after applying for Israeli citizenship, Daniel and his family spent Hanukkah with five other families in the Negev: 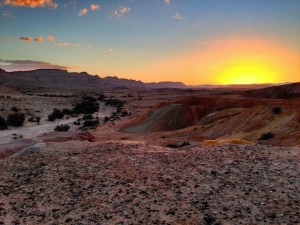 Standing around the flames that were struggling to stay alight in the gentle desert wind, we huddled together to try to block the breeze so that the candles would not blow out. This is it, I found myself thinking; this is the kibbutz galuyot, the “ingathering of the exiles” that the tradition has talked about and dreamt of for two thousand years. With the chill of the desert night getting stronger and stronger, we found ourselves huddled closer and closer together, both for the warmth and to make sure that the candles didn’t get blown out. I looked at my kids. For centuries, Jews had been trying to make sure that the lights did not get extinguished, that Jewish life would somehow continue. And here were my kids, living this wonderful moment, part of this small band of people drawn to this one place, just to keep the flame alive.

Hanukkah miracles all over again, I thought. And now, because my kids live here, they not only celebrate them — they’re part of the miracle.

But soon came the Oslo meltdown. Hope for peace was consumed by the flames of hatred and the 2nd Intifada. Though this didn’t change the Gordis’ commitment to stay in Israel, it did bring a time of emotional wrestling for Daniel who had to come to grips with the realization that he had taken his children from a safe, secure neighborhood in Los Angles to live in a place now at war. A place where there is an endless assault on one’s sense of security and a daily fear for one’s children and spouse. He grieved as he saw the loss of innocence of his children and wrestled with the very real possibility of sending his children to possibly die in what seemed a endless war.

Can a land emit a poison, a toxin that confuses, that obfuscates, that virtually guarantees that we become something other than what we want to be? Is there something about this land, or our passion for it, that blurs the vision? What is it about this land that blinds us to the very real and often devastating cost of our love for it, that leads us to ignore the horrific and repeated story of death for the sake of keeping it, a death that often inexplicably robs us of our children, and our children of their lives?

Is it possible that a place can blind us to the fact that our children are just that — children who need our love and protection, not pawns in the battle we choose to fight? And is it possible that no matter how one might try, that poison seeps in and vanquishes us?

… In the last week of March, Shalhevet Pass was killed in the Jewish quarter of Hebron. She was ten months old. A Palestinian sharp shooter leveled his rifle in the direction of the Jewish quarter, located her in his sight, and sent a bullet into her skull.

What does one make of this the morning after?

“What is that suppose to mean?” Elisheva asks me when I mutter while reading the paper.

“Anyone who would shoot a baby on purpose, just like that, is an animal.” I reply, “And those people who live in Hebron, they’re maniacs. Ridiculous — living in a dangerous place like that just to make a point. Knowing their kids could get shot. Who gives them the right? Bunch of lunatics.”

“And just what the hell do you think we’re doing?” comes the icy response. “If the shooting comes here, are you picking up and leaving? Even if it gets dangerous for the kids — as if it isn’t already. You know you’re not going anywhere. And not only because everything you have is here, just like them, there. But because you think it’s yours, and no one’s going to force you out. Because you’ve said it dozens of times: You’re not going to be the first Jew in history to give up on Jerusalem. Well it’s the same with them. They just chose a different spot not to give up on.

“That’s why you’re upset Because you’re just like them. Because we’re really no different than them.”

This isn’t a read that allows you to be passive, Daniel draws you in and asks questions that have no answers and will trouble your heart and he does it with gentleness, compassion, and at times even a touch of humor.

In light of times we find ourselves in, this is a timely read. Hope for peace seems pretty unreachable at this point in time, antisemitism abounds, for those of us in the USA who love Israel — we grieve over a government that seems no friend to them… sometimes the line can seem pretty thin between hope and despair. Daniel does a wonderful job of not just treading that line, but of choosing hope.

The hatred of Genesis will not be easy to overcome. It was long time ago that Ishmael and Isaac went their separate ways, torn apart by a world that didn’t seem to have enough for the two of them. Perhaps it was foolish, even audacious, to expect that we’d be the ones to see the rift healed. It was probably too much to ask. Why should ours have been the first generation to move to Israel in thousands of years and have it be conflict free, to have peace reign when the story we tell about  ourselves is one of jealousy, hatred, bloodshed, and conflict? Why? Where did we get the naive idea that it would all end just for us?

But for how long? When? When will something change? we know that we have to wait, but without limit? Is there an end in sight? Patience, this would seems to say. Patience: the moral of this story we tell.

Before the mountains came into being,
before you brought forth the earth and the world,
from eternity to eternity You are God.

You return man to dust;
You decreed, “Return you mortals!”
For in Your sight a thousand years
are like yesterday that is past,
like a watch of the night.

*Updated and Republished as Home to Stay