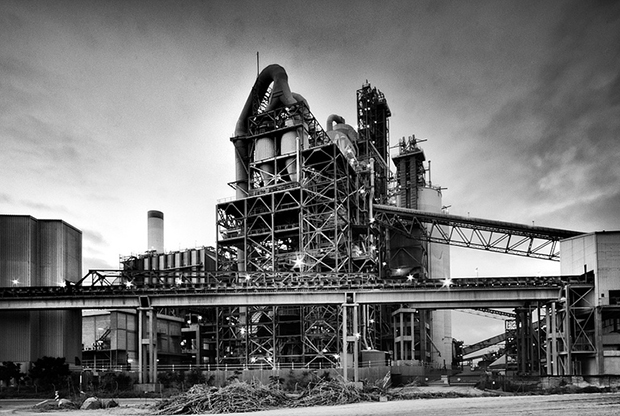 The NESHER CEMENT factory in Ramle (note: NOT Ramallah) is visible from Israel’s Highway 1. Riding the bus between Jerusalem and Tel Aviv, one sees it perched on the horizon, an eruption of industry in an expanse of green. It appears almost whimsical: two narrow twin mountains of vaulted domes and cascading pipelines in whites, pinks, and blues. At night, the factory glitters. People have compared it to Emerald City, a spaceship, an amusement park.

One sees it on the highway when passing the exit sign for the city of Modi’in. I first assumed that the sparkling apparition was Modi’in, which I came to imagine as a technologically advanced settlement from the future—a miniature Tokyo lost in a stretch of Israeli farmland. I recently drove by the factory during the day and asked my traveling companion what it was. “Some kind of factory,” he said. “Luscious, isn’t it?” We stared at it in awed silence.

After doing a little research, I discovered that it was the Nesher Cement Factory. Seeing it became my favorite part of traveling through Israel. During Passover, when it’s open for tours, I went and paid it a visit.

The tour taught me that the Nesher is Israel’s lone cement producer. Founded in the pre-state era, the company has been producing cement for over 80 years. It does so by quarrying limestone and clay and superheating them until they form what are known as “clinkers,” small stone-like chunks that are pulverized into powder. The end result is bagged and sold at the price of 28 shekels, or about eight dollars, a bag.

The tour group was large enough to fill a small auditorium. We saw footage of Yitzhak Rabin giving a speech about Nesher Cement. He talked about the value of cement to Zionism, about the people who made the cement, and the cement that built the State of Israel.

We then piled into two buses and drove through the facility. The factory was marvelous. Long conveyor belts carried material from the quarry to the central compound. Our tour highlighted the factory’s green ethos. The quarry was ringed with trees planted to catch dust. The old quarry was filled with water and had become the site of a water treatment plant. The factory’s furnaces were heated by burning selected waste from other industries and recycled materials were utilized throughout the facility. Once, our guide told us, during digging in the quarry an underground cave was found in which 18 species of invertebrate were discovered, many of which had evolved in the darkness to have no eyes. The area was left protected and delicately re-covered, only to be bothered occasionally and delicately by visits from biologists and environmental researchers.

I was able to pocket a “clinker” before we left. At home, I put it in the shoebox where I keep treasured keepsakes. Cement is strong and simple. It provides a lot and asks relatively little. It is capable of building wonders like the Nesher Cement Factory, and, given enough time, it simply crumbles and returns to dust.

Matthew Schultz is a graduate of Sarah Lawrence College in New York, where he studied creative writing and literature. He is currently living and writing in Tel Aviv. His work has appeared in Ecotone Journal and Zeek Magazine.

One thought on “A Mysterious Factory in Israel”