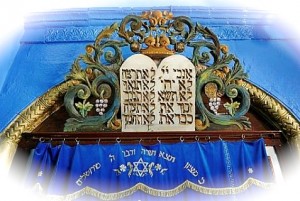 The portion, Re’eh, begins with Moses saying: “Behold! Re’eh – See! I am setting before you today blessing and curse.”  An emphasis can be placed on today as we have the choice every day to follow the good way that God sets before us in His Torah – His teaching and instruction – and to walk in it. Or, we can choose to go our own way. The latter ultimately will lead to curses and sorrow rather than His blessing.

Today the world is facing an enormous challenge – that of standing with the nation of Israel, in accord with the Word and purposes of God, or with the enemies of the God of Israel. God revealed to Abraham that all the land of Canaan was the Land He had promised to him and his descendants. And God said, “I will bless those who bless you, and him who dishonors you I will curse, and in you all the families of the earth shall be blessed” (Genesis 12:3-7). Again, the results of the choice made will be either blessing or curse.

The portion also emphasizes the principle of tzedakah, or charitable giving, primarily to the Levites (those who serve as priests, who minister to God and the people, and who receive no inheritance of a portion of the Land itself), and also to the poor and to widows and orphans. Giving is particularly connected with the celebration of the biblical Festivals which are specified as particular times of God’s blessing (16:15b).

The portion, Shoftim, stresses the importance of righteous judgment (mishpat tzedek) by judges and officers of the court. The concept is doubly stressed in 16:20, Tzedek, tzedek tirdof! “Justice, justice shall you pursue!” Why? “That you may live.”
Justice affects life. This biblical theme establishes the priority of social righteousness, which involves and affects every individual, family and community, as well as every nation.

On a social level, the injunction weighs in particular upon those who act in a legal capacity and in their dealings on behalf of the weaker members of society, such as widows and orphans.  On a national level, the justice and righteousness of the judiciary should be an example for all the country. Corruption at this level brings dire consequences. How blessed we would be if the Word of God was honored by all and in every endeavor of society!

“For the Word of the Lord is upright, and all His work is done in faithfulness. He loves righteousness and justice; the earth is full of the steadfast love of the Lord” (Psalm 33:4-5).

The portions Ki Tetze, ‘When you Go Out’ and Ki Tavo, ‘When you Come,’ hint at God’s promise in Psalm 121:8, “The Lord shall preserve your going out and your coming in from this time forth, and even forevermore.”

The two portions, along with the one that follows, Nitzavim, always fall in the sixth Hebrew month of Elul – a time of preparation of one’s heart, mind and spirit before the seventh month of Tishrei in which we celebrate the awe-filled High Holy Days of the Hebrew calendar and the joyful Feast of Tabernacles. During this entire season we are forcefully reminded that God is Creator and Sovereign over all of nature and humanity. Ultimately, the world is governed only by the Father’s will, which is good, just and true, and thoroughly suffused with His perfect love for us, His children.