Hebrew numbers have masculine and feminine forms.  The feminine form is generally used for regular counting and, for example, in telling the time and telephone numbers. 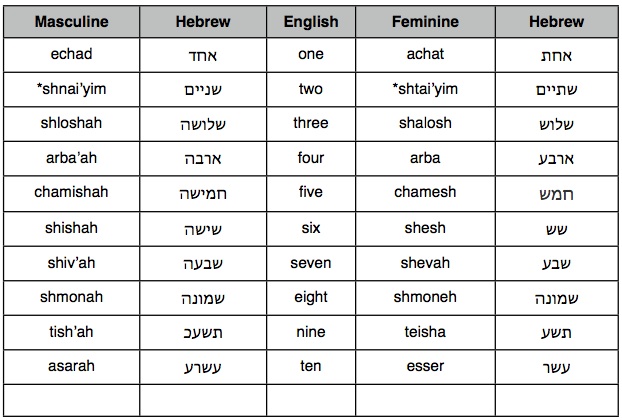 Ordinal Numbers  – Days of the Week

Hebrew uses ordinal numbers for the days of the week, following the pattern of Creation.

Yom is a masculine noun, so the masculine form of the ordinals is used. The feminine form adds either the letter hey, giving the ending an ah sound, as in rishonah, shniyah, or a tav, as in shlishit, revi’it, chamishit.

See and Download Chart – Days of the Week Chart HERE

Each letter has a numerical value and numbers often are  written using the Hebrew letters.

Meaningful insights can be discovered in the relationship between the Hebrew letters of words in Scripture and their numerical value.

2 thoughts on “Numbers in Hebrew”