We read In Luke 4:16-22 how, in the synagogue in Nazareth, Jesus stood, read from the scroll and proclaimed the Jubilee vision of Isaiah: “The Spirit of Adonai, the Lord, has anointed me to announce good news to the meek …to proclaim liberty to the captives …to proclaim the year of the Lord’s favor…” (Isaiah 61:1-2a).

The time of this declaration might well have been on Yom Kippur, when every fiftieth year of Jubilee is announced and the Great Shofar sounded to “proclaim freedom throughout the Land” (Lev.25:10). In Temple times, slaves were set free and each could “return to his family.” Jubilee, Yovel, is a year of returning things to their place;  an intentional restoration of God’s intended freedom, order and harmony for His people and even the Land itself, which, as on every seventh shmittah year, is to be allowed to rest.

Yeshua (Jesus) was, as it were, sounding a clear shofar call at this beginning of his ministry of restoration. He was calling sinners to return to the fold of the Father. His “good tidings,” as Messiah and Lord, the anointed of God, are the foretaste of the final sounding of the Great Shofar at the end of days, which will announce, “…the day of vengeance of our God” (Isaiah 61:2b).

The Lord revealed to the prophet Daniel, while he interceded for the restoration of Israel after her 70 year exile in Babylon, that there would be a future cycle of 70 ‘sevens’ and the time would come “…to finish the transgression, to make an end of sin, to make reconciliation for iniquity, to bring in everlasting righteousness, to seal up the vision and prophecy, to anoint the Most Holy” (Daniel 9:24). We still await the fullness of that prophecy. 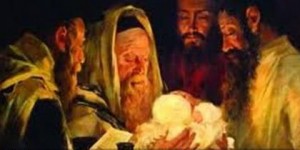 Yeshua came humbly as a helpless babe into the world, not wth judgment but bearing the chessed, the lovingkindness, of God in person to ailing humanity. His was, and is, the continuing shofar cry of the faithful Shepherd; calling those of the house of Israel who had strayed to return to the Father’s fold and also welcoming those who were far off who did not know His Father. “And I have other sheep that are not of this fold. I must bring them also, and they will listen to my voice. So there will be one flock, one shepherd”  (Jn.10:16).

We are presently experiencing an awesome anticipation; the ‘birth pangs’ of the final Jubilee, a climactic physical as well as spiritual restoration that began with the Shofar that sounded the Return of Israel after her exile to the four corners of the earth, “ I will surely assemble all of you, O Jacob; I will gather the remnant of Israel; I will set them together like sheep in a fold, like a flock in its pasture…” (Micah 2:12). It will conclude with the majestic Great Shofar announcing the arrival of the Shepherd – King Messiah, Melech HaMashiach.

May we keep our eyes focused on Him and lifted to Heaven in order to recognize the signs of His Coming. Let us have our ears tuned intently to His voice as we hear His footsteps approaching ever more closely.

Blessed is He who comes in the Name of the Lord!

5 thoughts on “JESUS AND THE JUBILEE VISION”