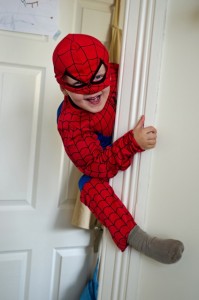 To accompany Keren’s latest mp3 teaching – Learn From The Creatures? – we wanted to share a a Music to Your Ears post to continue encouraging you with your vocalizing of Hebrew.

The Itsy Bitsy Spider is a well known nursery rhyme and a fun sing in Hebrew. Though we have little doubt that most of you already know the rhyme’s simple tune, you can listen to the Hebrew Itsy Bitsy Spider below.

You can download here – the Hebrew translation of the English song and also the words of the Hebrew song (YouTube) found below. 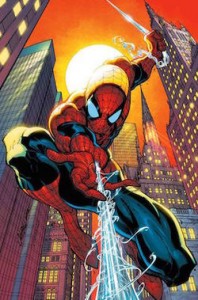 Well known to most of us, is the Marvel superhero – Spider-Man.

It may not be true in all cases, but it’s a pretty good rule of thumb. If the word ‘man’ appears at the end of someone’s name you can draw one of two conclusions: A) They’re Jewish, as in Goldman, Feldman, or Lipman: or B) They’re a superhero, as in Superman, Batman, or Spider- Man.*

According to Rabbi Simcha Weinstein – in the case of Spider-Man – he is both! He writes:-

My “Spidey Sense” is tingling! Almost half a century after the comic book superhero Spider-Man was conceived by Jewish writer Stan Lee, a Jewish actor named Andrew Garfield will don the red and blue Spandex for the forthcoming cinematic reboot of the Spider-Man franchise.

As the self-proclaimed rabbi of all “Geek-dom,” I can tell you that Garfield’s being Jewish is no small matter in the Spider-Man universe. For years, fans have wondered if Peter Parker/Spider-Man was crypto-Jewish, at the very least.

Let’s look at the evidence: Living with his Uncle Ben and Aunt May in Queens, N.Y.? Check.
Middle name Benjamin? Check. A student at Columbia (30 percent Jewish)? Check.
Being motivated almost entirely by guilt? Double check.

In August 1962, Stan Lee was basking in the success of the Fantastic Four and the Hulk. He decided to create a new kind of superhero: an angst-ridden teenager who finds himself suddenly blessed — and cursed — with superpowers. He’s drawn as a nebbish — a dark-haired, spectacled, neurotic worrier.

When Parker is bitten by a radioactive spider while visiting a science museum, he acquires an array of superhuman, spider-like powers: speed, strength and agility; a tingling “spider sense” that warns him of impending danger; the capacity to recover quickly from injuries and poisons; and the ability to scramble up walls and shoot (and swing from) super-strong webs. Originally nearsighted, Parker now, post-spider bite, has perfect vision.

Amazingly, Garfield seems to have been bitten by the guilty bug. The actor noted in an interview, “I have a really big guilt complex in that if I’m not doing any kind of good then there’s no real reason for being.”

From Spider-Man’s debut in “Amazing Fantasy #15,” readers learn about the intense guilt that Peter experiences as a result of his powers. At first, Spider-Man uses his powers for his own gain rather than stopping a common thug. Tragically, that thug ends up killing Peter’s beloved Uncle Ben, who had once taught his nephew,

Sam Raimi, the director of the previous (and hugely successful) Spider-Man movies, understands that this quirk in Parker’s character is the key to the saga’s power:

“Spider-Man is a character that spends his life trying to pay down his guilt. The only difference is that it’s caused by his uncle, not his mother,” Raimi said. “That’s a real classically Jewish quality — to be very aware of your sins in this life and try and make amends for them in this life.”

Spider-Man, unlike other superheroes, is more of a Woody Allen nebbish than an all-powerful strongman, and he suffers from stereotypical Jewish neuroses. In his Clark Kent guise, Superman only pretended to be a nerd. Peter Parker really was one. If early sneak peeks at the new movie, which opens nationwide July 3, are any indication, it looks like Garfield has tapped into his inner nebbish with gusto.

Perhaps the enduring quality of Spider-Man is that we are all in some way like him, continuously “guilting” ourselves because we suspect we’re squandering the gifts we’ve been given.

Personally, I have always been drawn to this challenge. When I was growing up in the north of England, my Hebrew school rabbi admonished me to be “a light onto the nations,” then on the way home from the synagogue I’d get a “wedgie” from the kids from St. Monica’s high school. Often I would quietly invoke the words of Tevye the milkman: “Once in a while, can’t you choose someone else?”

But you know what they say: “With great power comes great responsibility.” It may be kitschy and corny, but nearly 50 years later it’s still relevant, too.

One thought on “The Itsy Bitsy Spider – Akavish Katan”