Food is a passion in Israel, and in most Jewish homes and, if you are joining us here at The Food Pantry, likely in your home as well. Delicious meals, that are healthy as well as tasty, are indeed a gift from our Father in Heaven, who created all good things for His  children to enjoy. We therefore bless Him for them and gratefully give Him thanks. 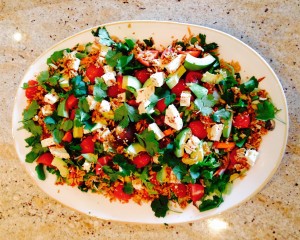 In Judaism there are dietary laws called Kashrut. It’s a huge subject that covers many areas such as permitted and prohibited species, ritual (and merciful) slaughter of animals, removal of blood, prohibition to mix milk and meat, special laws regarding produce in the Land of Israel, food at Passover, and even down to pots and dishes and silverware!

Among Jewish groups there are differing degrees of kashrut, from, for example, very lenient attitudes among Reform Jews, who may keep some degree of kosher at home but will not be too concerned when eating out, to very strict and detailed observance among the Ultra-Orthodox. Today, it’s somewhat easier to keep kosher, even outside Israel, because most supermarkets have kosher sections and many products carry kosher stamps, e.g., a K or OU mark [the U is inside the O], showing they are kosher certified.

For our purposes, however, we like to encourage friends to keep Biblically Kosher, especially those who believe that the Word of God is His guideline to us as how best to live as His people…for our own good.

What is involved in keeping Biblically Kosher?

This means eating species that are described and clearly listed in the Bible as “food” that is good for humans and permitted to eat, and avoiding those that are not.

They are described as follows:  (Leviticus chapter 11 and Deuteronomy 14:3-21)

What about the prohibition of mixing Meat and Milk?

In three different places in the Torah it is written, in effect, “You shall not cook a kid in its mother’s milk.” (Exodus 23:19; 34:26) Also: “You shall not boil a young goat in its mother’s milk (Deut. 14:21). The Rabbis interpreted this as a general prohibition against cooking, eating, or benefitting from any meat cooked with milk. This was extended to include not eating meat and milk together at all.

After eating meat products an observant Jew must wait from one to six hours, depending on the group’s custom, before consuming milk products. After eating dairy products, however, one need not wait before eating meat but should drink something or rinse one’s mouth well to remove any residue in one’s mouth. Orthodox Jews use different cooking and eating utensils for milk and meat and even, if possible, have two sinks for washing dishes separately.

Foods that are neither milk nor dairy are called PARVEH. For example, fish, grains and cereals, pulses, fruit and vegetables, spices are Parveh. These can be eaten together with both meat and dairy products. However, the eating of fish and meat together on the same plate is not recommended. If one has a fish course first, one should drink something or eat some bread or a cracker before eating the meat course, and the silverware should be cleaned or a new set used.

What to do if you like Mexican food or loads of cheese on chili?

There is some medical evidence that eating a combination of milk and meat products is hard on the digestive system. Also, for example, eating fruit after a meat meal disturbs digestion as fruit digests quickly and will leave the meat ‘fermenting’ in your digestive tract for longer than is necessary or advisable. However, if you are not an Orthodox Jew and want to aim to keep Biblically Kosher then, according to the text, you should simply ensure that the meat is not cooked in milk, which would rarely happen. 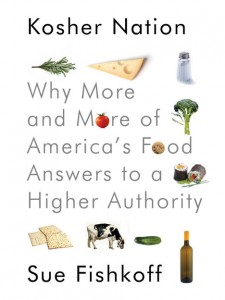 For a further in-depth exploration of the subject of Kosher Food you can look into
Kosher Nation by Susan Fishkoff. The nation she describes is America! As she points out:

More than 11.2 million Americans regularly buy kosher food, 13 percent of the adult consumer population. These are people who buy the products because they’re kosher, not shoppers who pick up Heinz ketchup, Miller beer, or Cheerios because they like the taste or the price. There are about six million Jews in this country. Even if they all bought only kosher food, which is not the case, they would not be enough to sustain such growth. In fact, just 14 percent of consumers who regularly buy kosher food do so because they follow the rules of kashrut. That means at least 86 percent of the nation’s 11.2 million kosher consumers are not religious Jews.

It seems that this non-Jewish consumer group includes vegetarians and vegans, Muslims, Seventh-Day Adventists, people with food allergies or gluten intolerance, and consumers who buy kosher food simply because they believe it “answers to a higher authority.”

See the full post on Kosher Nation at: http://toriavey.com/toris-corner/2010/10/book-review-kosher-nation/#kURY1w5TsCzB5d5i.99

Well, all that’s left to say is Betayavon (Bet-ay-ah-von) which is Hebrew for  Bon appetit! or Good Appetite!

2 thoughts on “What is KOSHER Food?”