The campaigns to erase Jewish history are getting stronger, and even though their arguments make no sense, if its repeated enough people will buy it.* 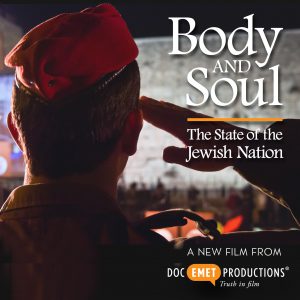 Body and Soul: The State of the Jewish Nation
Gloria Greenfield
Sound track by Sharon Farber,

Palestinians were given a fictional national identity, a national identity invented solely for the purpose of destroying a true one … Many people subscribe to this mad narrative who are not irrational or haters of Jews, but believe in justice. They believe lies, that illegality is law. Many millions have been fed a big lie.**

Addressing misinformation, propaganda, and outright lies that are being spoken and accepted as truth, this short film (65 minutes) sets the record straight. Though it may not contain anything new, per se, to those who are lovers of Israel and the Jewish people, there is value in hearing the truth spoken clearly and succinctly. This documentary goes a long way in strengthening those of us who stand with Israel against gales of ignorance and Anti-Semitism.

Understanding that we live in an ahistorical society,  Body and Soul: the State of the Jewish Nation is an invaluable film to share with those who have gained their understanding of history from the media and Hollywood, or who have been indoctrinated elsewhere with the pseudo-historical anti-Israel narrative.

Eventually this valuable film will be for sale via amazon.com. At this time, you can buy or rent Body and Soul: The State of the Jewish Nation via iTunes or visit Body and Soul The Movie in order to purchase this important documentary.

Enjoy the trailer for Body and Soul: The State of Jewish Nation below.

2 thoughts on “BODY AND SOUL: The State of the Jewish Nation”