They will not hurt or destroy anywhere on My holy mountain…
Isaiah 11:9a 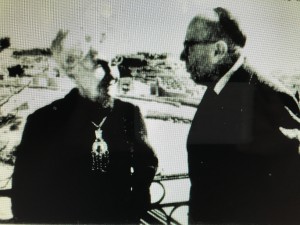 It has been just over two years since the work of HIS-ISRAEL first began. It seems a fitting time to re-visit the woman whose words the Lord used to inspire the heart of HIS-ISRAEL – Pauline Rose.

Known to many as “The Lady of Mount Zion” Pauline Rose was South African by birth. She and her husband were ostrich farmers during a time when ostrich plumage was in demand. Her husband Albert and his brothers were known as the ‘ostrich feather kings’ of South Africa. Once the industry collapsed, Albert and Pauline made their way to London. In London, Albert became a builder and Pauline a designer for a fashion house in Paris. Albert owned a tract of land and when WWI started the government wanted the land for agriculture. The Roses took over the duties of the farming and their farm became the origin of the famous Heston Farm outside of London. No stranger to tragedy, Pauline and Albert lost their son in his youth.[1]

Agaist all odds, while much of Jerusalem was still occupied by Jordan, Pauline Rose and Albert created a home on Mount Zion.  In the spirit of the Lord, it was a safe and warm place welcoming people from all walks of life into a circle of fellowship. Pauline shares in her book Window on Mount Zion:

My husband and I moved in and gave it the name Ha-Ohel (The Tent). We chose this name with the prayer that the spirit of Abraham’s tent would abide in it, making it a place where all people who came could find a loving welcome – a meal – a bed, rest, or renewal of the spirt, according to their needs.

But long before the house and garden on Mount Zion, Pauline had a heart for Jews and Christians working together in love to prepare the way of the Lord in the land of Israel.

Pauline Rose was one of a very small group who felt the call to bring the understanding and the Light of Messiah to Israel. On June 22, 1946, Pauline was able to kindle His light in Jerusalem in preparation for what she – and the then small and newly formed Jewish Christian Community – hoped would be the beginning of a Messianic Congregation in the Land.

You can read her words in The Light Of The Messiah.

During the perils of Israel’s new statehood (1948) Pauline refused to be evacuated. Instead she stayed and at risk to her own life chose to serve others. Her experience of these tension-fraught days is recorded in her book, The Siege of Jerusalem. Abram Poljak, who spearheaded Messianic Judaism in Israel, speaks of this time and Pauline’s arrest (and the arrest of four other members) by the Irgun (the Stern group, followers of Ze’ev Jabotinsky, led by Menachem Begin):

Our Community stood firm. Several times each day Pauline Rose went through the rain of bullets from her flat in Rehaviah, a suburb, to our meeting place in the centre of the New City of Jerusalem – often the only person to be seen in the streets. She also fetched food and water for other people who dared not go into the street; she assisted sick women in their housework and nursed patients in a hospital. Her faith and quiet heroism made her a shining example, keeping the Community together. The fact that, as a woman, she thus despised death carried the others along with her and during all these months not one of the appointed services was cancelled.

Information by hostile circles led to the detention and questioning of several of our members in the course of the war months. They were well treated by the Jewish police and military authorities; and having proved that they did their duty as citizens and had no contact with the enemies of Israel, they were set free again, the authorities expressly declaring that they did not take exception to our members’ beliefs. (The Jewish government had, at the proclamation of the State of Israel, guaranteed freedom of religion.)

However, the arrest of five members of the Community by radicals in the middle of August took a different turn. The Stern Gang aimed at Pauline Rose in the first place, who holds a British passport, speaks English and looks like a Gentile. The Stern Gang members maintained that she was a British agent, and the Jewish Christian Community a spy organization under a religious cloak.

The Sternists had succeeded in laying hold of a number of British spies and Jewish traitors. The first, they handed over to the authorities for trial; the second, they shot themselves. And now three women and two men of our Community were in their hands and recommended to say their last prayers.

The group pleaded their innocence but emphasized their faith in Jesus as the Messiah of Israel. Only one woman, on hearing the death threats, denied her faith, telling the Sternists’ court that she would have nothing more to do with the Community, whereupon she was set free. The trial of the other four was postponed to the following day.

Meanwhile the “arrest of the Jewish Christian Community” had become known in Jerusalem (a Hebrew daily paper reported about it), well-known Jews who knew Pauline Rose took up the case, convincing the Sternists that their accusations were untenable, and achieving the discharge of all.

The time has not yet come to speak of the experiences of our friends in prison. I only want to say that however hard the test was, they all thought of it as a privilege, a divine favour and considered it their happy lot. Like the Apostles of old, these Jewish Christians were able to sing songs of praise in prison and witness to the light of Christ before the powers of darkness.

In summing up we must say that the conduct of the Community during the siege of Jerusalem, and that of its leading circle in prison were worthy of our great calling, and form a chapter of praise in the history of the Jewish Christian movement.[2]

In 1959 Pauline and her husband Albert made aliyah to Israel. Fighting for years for permission to move into a particular tumble-down house on Mount Zion, in 1964 Pauline and Albert leased and began the full renovation of the house and garden. At this time Pauline was in her 70’s, Albert in his 80’s. Situated on the Jordanian-Israeli border, in 1967 Pauline found herself in the middle of the Six Day War.

The old woman was all alone when the guns commenced to thunder and bullets ripped the soft summer breeze.

What was she to do? Try to find some sort of shelter where she could cower in darkness until the shooting ended?

Certainly not! Instead, she whipped out her tape recorder to make a permanent record of the battle sounds.

For this was no ordinary fight. It was the battle for Jerusalem in the 1967 Six Day War between Israel and three Arab states. And this was no ordinary woman. It was Pauline Rose, who went to live on Mt. Zion because she had a vision that God wanted her to reside there.

Join Keren as she reads Pauline’s remarkable story of the transformation of the little house and garden on Mt. Zion and the 1967 Six Day War – Window On Mount Zion.

Read also Pauline’s article Our Protection – where Pauline speaks of our greatest protection in any battle.

Many of Pauline’s relatives were among Hitler’s first victims. You can read The Power Of The Spirit where Pauline shares  of her visit to Germany in1936 and her return after the war. 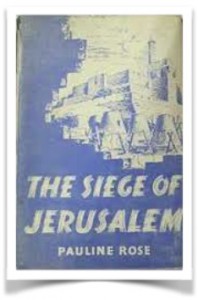 This summer, Keren and I aim to share with you Pauline Rose’s book The Siege of Jerusalem, Pauline’s eyewitness account of the events in Jerusalem, 1948, during Israel’s War of Independence.

The enemy surrounds us — is on our doorstep! Terrible battles are in progress. All sections of the Jewish city are being shelled… Jerusalem is like a city under sentence of death, bearing within it the certainty of life.[4] 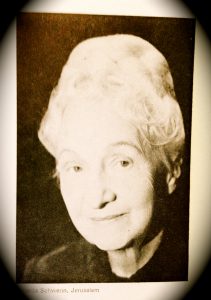 A special thanks to Paul Meier – Abram Poljack Archieve – for his permission to share Pauline Rose’s articles.

Photo credit – David Rubinger, Pauline and Albert Rose at their home on Mt. Zion in Jerusalem