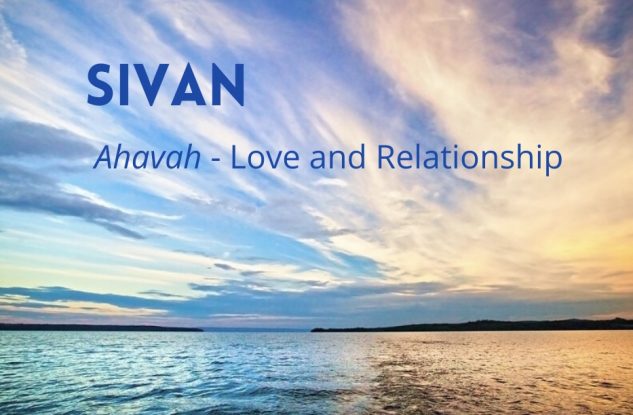 SIVAN is the third Hebrew month. We are told in Exodus 19:1,
On the third new moon after the people of Israel had gone out of the land of Egypt, on that day they came into the wilderness of Sinai.

Sivan is viewed as a month of movement…the Israelites were moving forward, out of slavery into the freedom of God’s Kingdom. Sivan also is considered a month of fragrance. Physically, in the biblical context of Exodus, this does not make as much sense. We generally picture a wilderness as a dry and desolate place and certainly not filled with fragrant fields, orchards or gardens. However, once they reached the Land promised by God it was as we enjoy it today. Sivan is the month of transition between the seasons of Spring and Summer and, following the beauty and fragrance of their blossoming we see the fruit of the trees growing and ripening.

The prophet Hosea describes the beauty and fragrance of Israel when God’s people have returned to His Land:

“I will be like the dew to Israel;
he shall blossom like the lily; he shall take root like the trees of Lebanon;
his shoots shall spread out; his beauty shall be like the olive,
and his fragrance like [the cedar of] Lebanon.” (14:5-6)

During Sivan the festival of Matan Torah, the Giving of Torah is celebrated. It also is called Shavuot and Pentecost – the Jubilee of the fiftieth day since Passover. Spiritually, the month also is filled with the perfume of God’s gift at Sinai of His Word – the Torah, the Tree of Life – with its promise of beautiful fruit as it blossoms in our lives. In the Babylonian Talmud the sages record an entrancing idea;

“With every word that went out of the mouth of the Divine, the world was filled with the fragrance of spices.” This would be reenacted with the unique, special fragrance from the Incense Altar that would fill the air in the wilderness Tabernacle and in the Temple in Jerusalem – signifying the Holy presence of G-d in His dwelling place.

The Word of God also is described as the Bread of Life.

“Man does not live by bread alone, but man lives by every word that comes from the mouth of the Lord.” (Deuteronomy 8:3, quoted by Yeshua in Matthew 4:4)

We know the wonderful fragrance of freshly baked bread!

Interestingly, we see a recurring theme of bread during the Spring Festivals. At Passover a central element is the Matzah – or lechem oni, poor man’s bread. Once in the wilderness G-d provides manna, the supernatural bread from heaven – revealing His love and care for His newly birthed people. Once in the Land, at Shavuot the kohanim waved two freshly baked loaves of bread as an offering before the Lord – a symbol of the reality of the working in harmony of G-d and His people to produce bread – the staff of life. 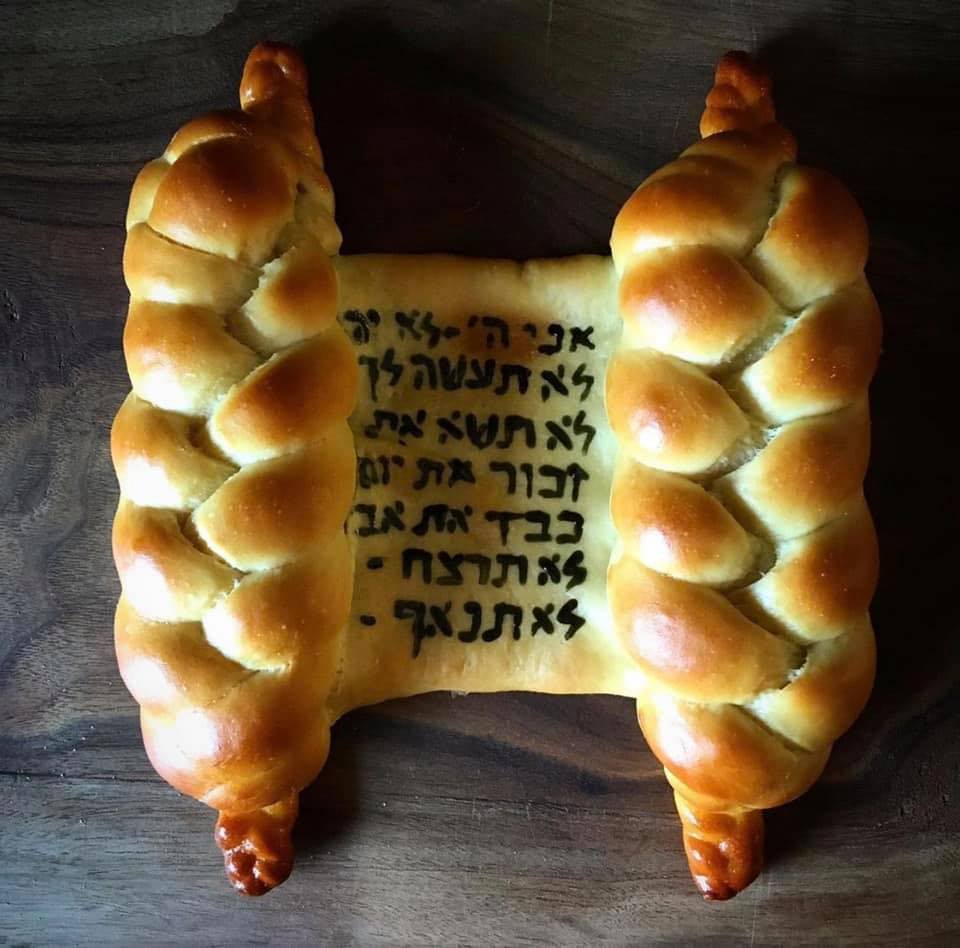 On Shabbat before eating the challah, and at any meal where bread is eaten, the Motzi Lechem blessing is recited. The blessing expresses thanks to G-d for “bringing forth bread from the earth.” We recognize that all we have, all our sustenance, is from His hand, and yet, in the case of bread, human beings need to work with the grain He provides – harvesting it, winnowing, grinding it for flour, kneading the dough, and baking the bread.

Jewish author, Jill Hammer, notes that “…the celebration of bread and the celebration of Revelation are similar in theme.” Revelation and redemption are only fulfilled when we become part of the process. G-d gives us the gift of His Word and knowledge of Himself, but He needs us to receive it. Like a mother’s womb receives a seed of life, it must be sheltered deep within our hearts and allowed to grow. Then it can be given birth externally and nurtured in order that it may accomplish its Divine purpose.

At Shavuot the book of Ruth is featured, which beautifully illustrates the key themes this month, which are Love – Ahavah and Relationship. The initial close relationship is between Ruth, the Moabitess and stranger to Israel, and her Jewish mother-in-law, Naomi. Stemming from this relationship, Ruth chooses to cling to the G-d of Israel and to join His people. When they return from Moab to Naomi’s hometown of Bethlehem, the harvesting of the wheat crop, with the ripe scent of summer replacing the delicate fragrance of spring, becomes the backdrop for the story of love. 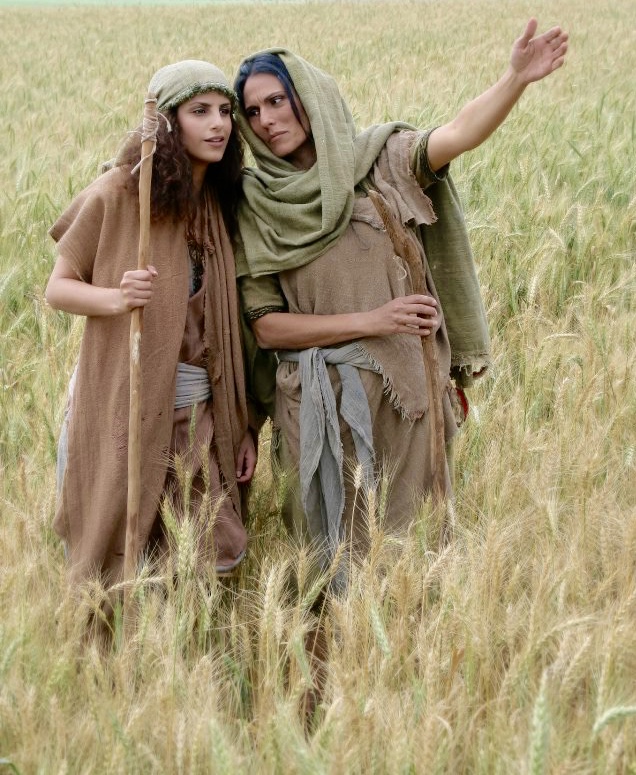 As Ruth labors in his wheat fields, to gather grain to provide bread for Naomi, she is noticed by Boaz, the landowner and their future redeemer. He is impressed by her courage and modest demeanor and he ensures she is protected and fed. Eventually, in a reflection of the wedding at Sinai, Ruth is received under the ‘wings’ of Boaz’s garment, leading to their covenant marriage. Spiritually, Ruth also is covered by the wings of the Shekhinah and she becomes the great-grandmother of King David, the ancestor of Messiah.

My beloved husband of blessed memory, Dwight Pryor, once made the striking comment that Messiah Yeshua is the love, or chessed – lovingkindness, of G-d incarnate. All Yeshua did, as the Word enfleshed, was a reflection of the eternal love of the Father. In this light, let us take a look at one instance. In Mark 2:5-12, seeing that Yeshua was surrounded by a crowd of people at his home in Capernaum, in Galilee, a few of the friends of a paralyzed man, who believed that Yeshua could heal him, lowered him through the roof in desperation. Yeshua looked at him and then said to the paralyzed man,“Son, your sins are forgiven.” To the scribes there, who considered this a blasphemy, he said: “So that you may know that the Son of Man has authority on earth to forgive sins…” he said to the paralytic, “Stand up, take your mat and go to your home.”

Rabbi Rami Shapiro, in his book The Sacred Art of Lovingkindness notes that Yeshua did not say, “Son, I forgive you your sins.” Rather he was “… the herald of the Good News that God’s forgiveness is absolute and timeless. Why? Because God’s love is ahavah rabbah – infinite, eternal love. Infinite love is unbounded, unconditional, present, here, now, and always.” Indeed, the Father’s love is limitless, and, therefore, so are His mercy, compassion, and forgiveness.

We all can be weighed down by sins and weaknesses. We can even be paralyzed in certain ways by painful stories in our past. But Yeshua offers a new story – the realization that our Father in Heaven’s love is greater than any self-condemnation or accusations of the enemy. When we turn and reach out to Him and receive His love, forgiveness, and healing, the pains of the past are released, our paralysis ends, and we can stand tall and walk forward in joy on the path He has prepared for us – for His glory!

Today much of the world is broken and hurting and we see awful expressions of hatred, violence, confusion, and shaming and blaming. More than ever people are in need of the love and forgiveness of the Father, and of true relationships. Let us pray that His River of Life and Love will flow out to all people, with this special prayer by Eknath Easwaran in God Makes the Rivers to Flow.

May all who live be filled with lasting joy
[the joy of knowing you are created in the image of G-d, our Father in Heaven,
and, as His child, you are loved with an eternal love]
May deception end and delusion cease.
May no one despise another,
Nor wish them ill.
May love grow boundless,
And may hatred end with the release of fear.

Let us go forward proclaiming words of faith in the Word of G-d and not speaking words of fear.
And, let us receive a deeper revelation of our Father’s love, in Messiah, and allow that love to be shared in all our relationships with others – whether family, friends, or strangers.

NOTE: A FaceBook Live video of this teaching can be found on the His-Israel FB page.