What happens when six adventure-seeking sheep–plus one reluctant and “wooly wart” sheep– decide to leave the protection of their shepherd and head out into the big, wide world?

A Tale Of Seven Sheep
by Gadi Pollack

This treasure of a book has layers that illustrate lessons of ife to both children and adults alike. Within one layer, that of historical/political application, we can view this whimsical tale as a parody of the time the nation of Israel currently finds herself in (July/August 2014) –a time when the nations are pressuring Israel to make peace with darkness, in fact with an enemy motivated by hatred and evil intent.

In this story, seven sheep find themselves deep in a forest and surrounded by –of all terrible and horrific things that make their wool stand on end– ferocious wolves! The sheep come up with many ‘baaaaaah’d plans to save themselves, such as this plan one sheep relays to the rest:

My fellow sheep, the wolves aren’t pursuing us for nothing. Something is obviously bothering them. Perhaps the problem lies with us. Let’s sit and talk things through with them, iron out our differences, and come to a settlement– which I’m sure they’ll be happy with. I am prepared to be our representative at the peace talks.

You can imagine how well those ‘peace’ talks went since the last thing the wolves were  interested in was peaceful, heart-to-heart dialogue.

Although, sadly, it is no longer in print, A Tale of Seven Sheep is a treasure worth finding. It sat on my wish list for a few years until I found a deal for $15. I purchased the book and discovered that it was well worth the wait! I encourage you to search for A Tale of Seven Sheep. A couple of places that currently sell copies of the book are AbeBooks.com and Amazon.com, but you can probably find copies elsewhere, too.    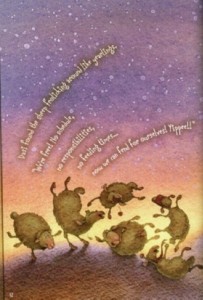 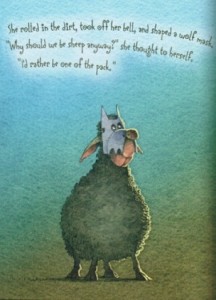