A NEW LIGHT WILL SHINE ON MOUNT ZION!

INTERVIEW with Adelheid Perlick at the Roses’ house on Mt Zion!

Pauline and Albert Rose, despite the fears and warnings of others and the physical challenges, succeeded in building a home and a beautiful garden in war-torn Jerusalem of the late 50’s and early 60’s, leading up to the Six Day War.

The Meier/Perlick family from Germany had become close personal friends and determined to come alongside the Roses and assist in whatever manner they could.
Today we enjoyed the fruits of their faith and labors as we sat in the garden and deeply sensed the peace and chessed – loving-kindness – of His Presence; that which the Roses had envisioned and for which they trusted HaShem to establish in their home – HaOhel, the Tent.
“For when the Lord shall build up Zion, He shall appear in His glory.” (Psalm 102:16)

He still is building!
~ Keren Hannah

You can follow the remarkable story of ‘The Window on Mount Zion’ on Books/Audio on the His-israel website.

The newly published book is available on the www.FFOZ.org website

God, Science and the Search for Meaning 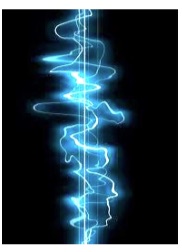 KH:  There have been historic battles waged over the issues of Science and Religion. Do you see any balance between the two?

RJS: Yes. Science and Religion are two essential perspectives that allow us to see the Universe in its three dimensonal depth. Science takes things apart to see how they work. Religion puts things together to see what they mean. Science is good at sorting and analyzing things [characteristic of the left-brained masculine mind] and Religion is good at focussing on relationships with people [ more characteristic of the feminine right-brain].
Whole civilizations have made, and are making, mistakes because they could not distinguish and integrate the two and applied the logic of one to the logic of the other.

KH: Can we say, then, that Science is more detached and impersonal, dealing with matter and cold, hard facts, while Religion is more people orientated and can include wonder and mystery?

RJS:  Not necessarily.  When you treat things as if they were people the result is myth. Light is the sun-god, rain is from the sky-god; the Creation itself is worshipped rather than the Creator. Science was born when people instead started to observe, measure and record Nature and thereby have increasingly discovered the limitless wonder of the Intelligent Design that sets and holds all of Creation in place with immeasurable power, as well as with breathtaking beauty, from the widest vistas to the microscopic molecule.

A greater tragedy occurs, however, when the left-brain totally dominates and people are treated as things. The result is dehumanization. People are categorized by color, class or creed and treated differently as a result. A major shift in mankind’s understanding occurred when the Creator of all was sought by and revealed to the man Abraham. As a result of this covenantal relationship, people stopped seeing each other as objects and began to see each individual as unique, sacrosanct, in the image of God.

KH: Obviously, then, it’s important to clearly distinguish that things are things and people are people.

RJS: Realizing the difference is sometimes harder than we think. The challenge facing every society, civilization, even each family, couple and individual, is to see the two spheres as separate but needing to be integrated to form a healthy and balanced whole. That is harder than it sounds. It is, in fact, the first presented to mankind at Creation.

KH: What can we understand from the accounts in Genesis?

RJS: That God created the first man, Adam, whole and complete, with both hemispheres of his brain intact. The heart and purpose of Creation, however, was relationship – between God and people but also a person with others, and so God separated the right side of Adam and formed woman. Eve was born. God did not simply create another carbon copy of Adam. He made two from the one being and presented the challenge, “Now become one. You each have someting that the needs. Learn how to respect and value the differences in the other and by co-operating and partnering together you will learn how to live in harmony and wholeness with one another; and also with your Creator – God. Because this is Love.

KH: What happens when God is removed from the equation of people and relationships?

RJS: In a world [or relationship] without God, the primary reality is “I” – the atomic, physical self. Other people are not as real to me as I am to myself. “Why should ‘I’ be moral? Why should ‘I’ be concerned about the welfare of others to whom ‘I’ am not directly related? ‘I’ pass my genes on to the next generation. ‘I’ engage in altruism.” That attitude may seem selfless but actually serves self-centered ends.

KH: So, without God, without the ‘Thou’ in , as Martin Buber describes, the ‘I and Thou’ relationship with God, only the ‘I’ is left. In effect, then, ‘I’ – the person – becomes god? The will of the person is exalted above the will of God.

RJS: Yes. This is reflected in every sphere of human endeavor. Consumerism is about the ‘Choosing I’. Liberal democracy about the ‘Voting I’. Family is about the ‘Physical I’…and so on.

KH: In regard to the ‘Political I’, Abraham Joshua Heschel once commented, “History is the arena in which the will of God is defied.” What effect does a godless stance in a society or nation have on a wider, world-history scale?

RJS: The four terrifying regimes based on a godless society that arose in history were the French Revolution, Nazi Germany, the Soviet Union and Communist China. The danger today is a radical religiosity combined with an apocalyptic political agenda, able through terror and assymetric warfare to destabilise whole nations and regions, a la the Crusades, in the name of their god and religion. The religious moderates of all faiths would agree that this is as destructive as secular totalitarianism.

KH: How can the moderates stand against the terror-based factions?

RJS: While it is imperative to stand against terror, we need to be aware of another danger. The new atheism has launched an unusually aggresive assault on religion in general, which is not good for intellectual integrity, spiritual awareness, for science, or for the future of the West.  When a society loses its religion it tends not to last very long thereafter. It discovers that having severed the ropes that moor its ethics and morality to something transcendent, all it has left is relativism; and a relativism that is incapable of defending anything including itself.

KH: That is a sober warning. Can you sum it up in a nutshell?

RJS:  When a society loses its soul it is about to lose its future.

You can order the book on Amazon The Great Partnership: Science, Religion, and the Search for Meaning 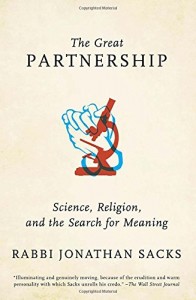 In the Sayings of the Fathers (PIrkei Avot) 1:2, Shimon the Righteous, Shimon HaTzaddik, [one of the Sages of the Sanhedrin or Great Assembly established from the time of Ezra] states that the world is built, or stands in balance, on three things: the Word of God (Torah); the service or worship of God (avodah); and acts of kindness (chesed).

“I will sing of the lovingkindness [chesed] of the Lord forever … For I have said, ‘Lovingkindness shall be built up forever.’”

In Scripture the qualities of chesed and tzedakah, along with emet, truth, often are linked. Here I explore these concepts in an ‘imaginary’ conversation (based on many we used to enjoy!) by posing questions and presenting Dwight’s quotes (based on his teachings) in answer. Food for thought! 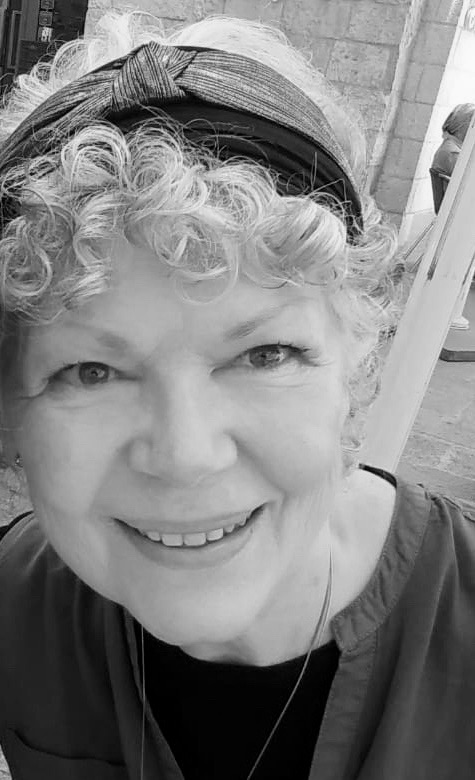 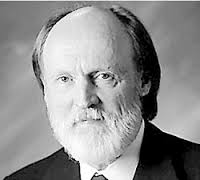 Keren Hannah Pryor  with  Dr. DWIGHT A. PRYOR  on

CHESED and TZEDAKAH  – Lovingkindness and Righteousness

KH:      Dwight, how would you describe the quality of chesed?

DAP:   Chesed is a chief characteristic of the God of Israel and a core covenantal  concept. Its range of meaning is wide and deep: lovingkindness, mercy, steadfast love, covenant loyalty and even grace.

KH:   What is the connection between chesed, tzedakah and emet – loving-kindness, righteousness and truth?

DAP:    Tzedakah, better translated as ‘righteousness,’ is a richly hued term in Hebrew. In the broad scope of biblical revelation it is used together and synonymously with ‘truth’ and also with ‘salvation’—in the context of God’s redemptive, saving acts in keeping covenant promises to Israel (e.g., Micah 6:4-5).

We see in the life of Yeshua  the outworking of salvation in the embrace of truth, tzedek, and kindness, chesed. In him, righteousness (the high standards of the Torah) and grace (the mercy of a gracious Father) embrace. Indeed, the Messiah embodies the way of love and truth that leads to life. In the Son we see a Father who abounds in justice, tzedek, and in loving-kindness, chesed.

DAP:  Yeshua also used it this way in Matthew 6:1: “Beware of practicing your righteousness [charity-tzedakah] before other people in order to be seen by them, for then you will have no reward from your Father who is in heaven.” He also taught that the genuine practice of righteousness toward the needy—i.e., giving generously to the poor—will give us “treasure in heaven.” 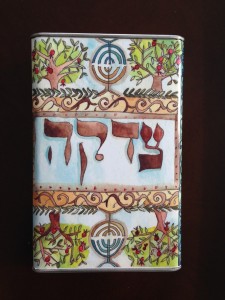 Pic: Tzedakah box; found in many Jewish homes –  a tin in which to save money to give to the poor or a worthy cause.

This is a powerful and practical principle for us all today. Let us engage in acts of kindness, g’milut chasadim, that will honor His Name and help repair a world presently broken and evidencing much evil and lack of chesed, tzedakah and emet. We can rejoice, however, knowing, in accord with His Word and promise, that all Creation will wondrously declare the Father’s glory.

Browse In Conversation With

Featuring Top 3/3 of In Conversation With