JERUSALEM – A Place of Meeting

One of the earliest world maps, charted by German cartographer Heinrich Bunting circa 1580, depicts Jerusalem in a small circle at the center of the world. From the circle, three large petal shaped areas extend outwards. One to the south represents Africa, one to the north-east, Asia, and one to the north-west, Europe. America [as seen in a mosaic on a wall at the entrance to the Jerusalem Municipality building on Jaffa Road] is a green blob in the lower left corner and is subtitled Terra Nova, the New Land. Geographical dimensions have altered radically through the subsequent four hundred plus years. In place of the charts of the early, intrepid explorers on their wooden sailing ships, we now have telescopic images of our earth captured from computerized spaceships! When viewed from a biblical perspective, however, Jerusalem has been and always will remain the center of the earth. 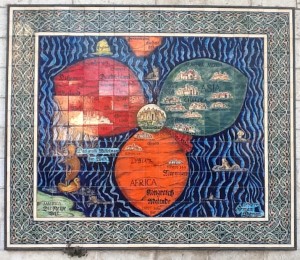 Together with the growth and spread of civilization, the sacred writings of the People of the Book, viz. the Hebrew Scriptures, the Tanach, and the New Testament carrying the good news of the God of Israel and of His Messiah, have gone forth from Jerusalem to the four corners of the world. There are now adherents to faith in the God of the Bible in every country on all the continents and on virtually every island of the earth.

It is an interesting fact that of all the sacred writings pertaining to every religion, the Bible is the only one that is inextricably linked with a particular geographical entity and the connection of a people with that piece of land. The very soil and rocks, the flora and fauna, and even the weather patterns all have a bearing and add meaning to the Bible itself. The God of the Bible specifically draws His chosen people to this Land. 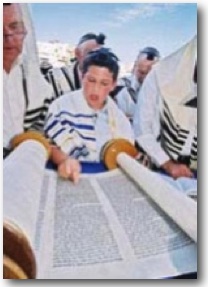 In Genesis, God guides Abram and establishes a covenant with him that permanently ‘ties the knot,’ as it were, between Himself, Abraham and his descendents and the land He shows him. It is a covenant that has vital implications for all the “families of the earth”.

Now YHWH said to Abram,
“Go from your country and your kindred
and your father’s house to the land that I will show you.
And I will make of you a great nation, and I will bless you,
and make your name great, so that you will be a blessing.
I will bless those who bless you, and him who curses you
I will curse;
and by you all the families of the earth shall bless themselves” (12:1-3).

“And I will give to you, and to your descendants after you,
the land of your sojournings, all the land of Canaan,
for an everlasting possession;
and I will be their God” (17:8).

Throughout history many have risen in opposition, with all the hatred and violence they could muster, and have tried to destroy this cord of the land, the people and their God. But God Himself has declared it to be “everlasting” – a covenant established forever.

Jerusalem is the heart of this Land of Israel and without her the land loses its meaning and identity. Throughout the past century, the restored Israel, with Jerusalem as its capital, has demanded of all people a radical paradigm shift in worldview. In particular, traditional Christianity can no longer, with any depth of integrity, think in spiritual generalizations and find a convenient label to attach to things.

The rebirth and re-establishment of Israel is a proclamation of the extraordinary; one which continues to shake modern conventional thinking. It confronts the world with the reality of the Word of God. The words of the prophets become current – the resurrection of the dry bones of Ezekiel’s vision, the returns of Jeremiah and Isaiah, the renewal of Zechariah. To quote Abraham Joshua Heschel:

“Israel is a miracle in disguise. Things look natural and conceal what is a radical surprise. Zion rebuilt becomes a harbinger of a new understanding, of how history is intertwined with mystery.” [1]

Jerusalem is called the “Holy City” and Israel is called the “Holy Land”. What causes this particular piece of ground to receive such an appellation? When God sets anything apart from the ordinary it is termed holy. At Creation, God set apart the seventh day; time, this special day, was the first thing to be called “holy”. The people of Israel, the descendents of Abraham, Isaac and Jacob, were set apart by God to be His “holy nation” (Exodus 19:6). The Temple in Jerusalem was declared holy because it was the place where God’s Holy Presence dwelt. So too, the land He set apart for His people is called holy, and His city of Jerusalem is holy because He chose it (2 Chronicles 6:38) and placed His Name there (Nehemiah 1:9).

Although Israel may be the size of a postage stamp on the face of the world map, it is that “stamp” – the Name of the Creator of the heavens and the earth – that makes it unique and has enabled the connection of earth with Heaven. 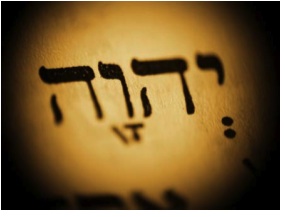 The Gate of Heaven – Jerusalem

Psalms inhabit the hills, the air is HalleluYah! **

The real essence of Jerusalem is a stillness; an anticipation, a contained eagerness enfolded in longing, that reflects the yearning of centuries and the imminence of Redemption. This essence becomes almost tangible as the busy and bustling-with-life city slowly quietens every Friday evening as the Shabbat settles like a soft mantle upon her hills and her homes. One does not simply live in Jerusalem, one lives with her. Like a queen, her presence is felt. How does one explain this phenomenon?

The secret at the heart of Jerusalem is that it is a place of meeting – a bringing together of ancient and modern, the divine and the human, sacred and secular. The natural and the supernatural are bound together in a mysterious union that is at the same time invisible and yet corporeal. Also a mystery: it is the place where the past and future meet with the present. Time itself somehow colludes and is concentrated in a vibrant sense of immediacy. All history, and life itself, find their meaning in the “now” of this place – this Holy City of God, Jerusalem. As Heschel describes:

“…in Jerusalem past is present and heaven is almost here.” *** 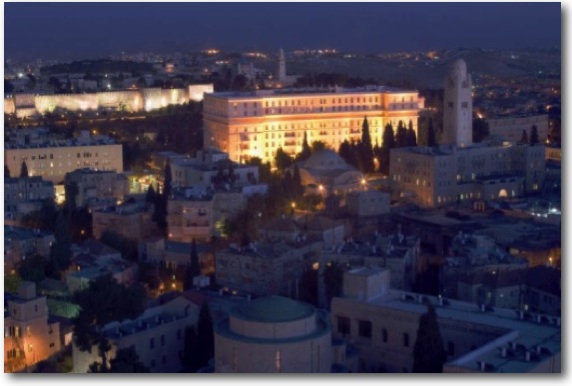 The city of Jerusalem, with ancient and modern compacted side by side, sparkles like a jewel nestled in the hills of Judea.

And Melchizedek king of Salem brought out bread and wine; he was priest of God Most High. And he blessed him and said, “Blessed be Abram by God Most High, maker of heaven and earth.”

After his supreme test, to offer his beloved son Isaac as a sacrifice, Abraham named the place Yireh – to see. This indicates more than a physical seeing; it is a seeing with the eye of faith; a recognition of the Presence of God. “So Abraham called the name of that place, ‘The Lord sees’ [YHWH Yireh]; as it is said to this day, ‘On the mount of the Lord there is vision (ye’raeh)’” (Genesis 22:14). Abraham prophetically saw ahead through the centuries to come. He envisioned the arrival of his grandson Jacob at this place, where he would dream and on awaking proclaim, “How awesome is this place! This is none other than the house of God and this is the gate of heaven” (Genesis 28:17).

He saw the reign of David the first king of Israel, who would proclaim the place as the City of God and the capital of his kingdom. He saw the glory of the Holy Temple, the House of God built by King Solomon; the destruction, the exile. Then he saw the Second Temple standing resplendent on the Mount and the arrival of the Messiah through its gates. He may well have seen further – Messiah’s crucifixion and resurrection, again the destruction of the Temple, the long exile, the spread of the knowledge of God’s Kingdom in all the earth, and then the restoration and final Redemption of all Israel and the nations with the arrival on the Mount of Olives of Messiah as King of kings! Yeshua declared: “…Abraham rejoiced that he was to see my day; he saw it and was glad” (John 8:56).

Yireh and Shalom are combined to form the name Yerushalaim – the City of Vision and Peace. It provides the world with a vision of God and the promise of His Peace. It is of interest to note that the name is a plural noun. This is indicated in Hebrew by the suffix yod-mem, pronounced im, such as the word eyes – aynaim, and hands – yadaim. This tells us that there indeed are two Jerusalems – the Jerusalem below on the earth and the Jerusalem above in the heavens, Yerushalaim shel matah and Yerushalaim shel malah.

To celebrate the restoration of this city to its rightful place, as center, heart, capital of the land of Israel, is ultimately a celebration of the God of Israel Himself. He chose Jerusalem to be His dwelling place forever. To be there, to build, to worship, pray and sing His praise, is to participate in its establishment on earth and also, in faith, to prepare the Throne of the soon coming King who will reign from that place over all the earth.

“[He] showed me the holy city Jerusalem coming down out of heaven from God, having the glory of God, its radiance like a most rare jewel,
like a jasper, clear as crystal. …
And the city has no need of sun or moon to shine upon it, for the glory of God is its light, and its lamp is the Lamb. By its light shall the nations walk; and the kings of the earth shall bring their glory into it.” 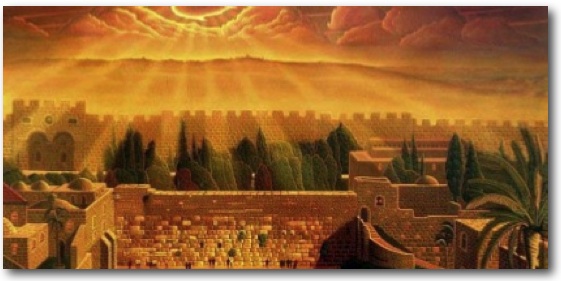 Today, the Holy Temple no longer stands in its rightful place on the Mount, yet the remnant of it, the Kotel or Western Wall, has remained the central physical point of connection with the Presence of God and also the spiritual focus of our thoughts and prayers wherever in the world the worshippers of the God of Israel may be. It always continues to be the “Gate of Heaven” – the place where the ladder in Jacob’s dream connected heaven and earth, the place where the Living Word, the Messiah of God, Yeshua, by his atoning death and glorious resurrection into new life, opened the gate for whosoever would come into the Presence of the Almighty God and Father of all.

Although the most beleaguered, fought over, destroyed and rebuilt city in the history of man, for thousands of years Jerusalem has remained the subject of poets, songwriters, artists and psalmists who have cherished the city of God in their hearts.

King David sang his Psalm that has been echoed by the Jewish people and lovers of Jerusalem for centuries:

“If I forget you, O Jerusalem,
let my right hand wither!
Let my tongue cleave to the roof of my mouth,
if I do not remember you,
if I do not set Jerusalem above my highest joy!”

How can a city be above one’s “highest joy”? The reason is one that gives no credit to man, it is only because it is the City of God, the place that He chose as His dwelling place in the earth and the place He will fully redeem.

“Hark, your watchmen lift up their voice, together they sing for joy; for eye to eye they see the return of the Lord to Zion. Break forth together into singing, you waste places of Jerusalem; for the Lord has comforted his people, He has redeemed Jerusalem.” 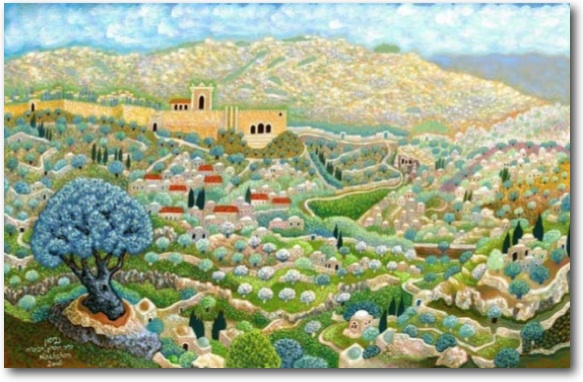 “May YHWH bless you from Zion,
He who made heaven and earth!”

One thought on “JERUSALEM – A Place of Meeting and Peace”