Did Christianity hijack the Gospels and New Testament and rise as a whole new religion – an entirely different way of seeing God from the way the Israelites and Jews have understood and worshipped Him?

After reading and reviewing Daniel Boyarin’s challenging book, this question arose in my mind. If one concurs with his research and ideas, which certainly rock the comfortable status quo, what does that mean to us as Bible believers who see Jesus as Mashiach El, the Messiah of God?  In what way should our lives be impacted and, whether Jew or Christian, should our approach toward and relationship with the other be affected?

For more background to the question please see the review in Book Highlights.

Pondering the challenging questions raised by Daniel Boyarin, which I [Keren] believe is a good thing to do given the significant times we are living in, I have come across other materials that feed into the discussion. Think on these…if you can take the time and are interested.

Judaism and Christianity are religions bound up together in human history. In the words of Rabbi Abraham Heschel [one of this century’s greatest Jewish scholars and a hero of mine], “Both share the prophet’s belief that God chooses agents through whom His will is made known and His work is done throughout history. Both Judaism and Christianity live in certainty that mankind is in need of ultimate redemption, that God is involved in human history, that in relations between man and man God is at stake, and that the humiliation of man is a disgrace of God.”

This is quoted in the introduction of an important book [sorry, more books!], which is a treasure for those concerned with the vital issue of Jewish-Christian relations in our time: TWO FAITHS, ONE COVENANT – Jewish and Christian Identity in the Presence of the Other, which is a compilation of essays centered on the key subject of Covenant by a group of outstanding Jewish and Christian thinkers and teachers. [Available on Amazon in print and Kindle form]. 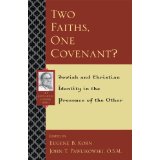 In his essay, The Covenant in Recent Theological Statements, scholar Michael A.  Signer, refers to a Jewish publication on the subject entitled Dabru Emet [Words of Truth] “…Christian teaching and preaching can and must be reformed so that they acknowledge God’s enduring covenant with the Jewish people and celebrate the contribution of Judaism to world civilization and to Christian faith itself.” It then describes  how the two faiths are drawn together by two central ideas: the God of Israel and of Scripture as the accessible disclosure of that God. The identification of both communities, therefore, is grounded on the reality of the enduring engagement with Scripture.

This common bond indicates that Jews and Chrisitians worship the same God, as Dabru Emet points out: “Before the rise of Christianity, Jews were the only worshippers of the God of Israel. But Christians also worship the God of Abraham, Isaac and Jacob, the Creator of heaven and earth. …Through Christianity hundreds of millons of people have come into relationship with the God of Israel.”  In another paper, Christianity in Jewish Terms, George Lindbeck offers that Christians should “celebrate” Israel [the Land and the people, as a fulfillment of the promises of God and proof of His ongoing relationship with Israel] rather than “appropriating” it. [As has been done via Replacement Theology.]

Dabru Emet concludes that the differences – predominantly in the approach to God between Christians and Jews, one through Jesus Christ and the Christian tradition and one through Torah and the Jewish tradition – are “humanly irreconcilable” and “will not be settled until God redeems the whole world as promised in Scripture.” Finally, they propose that, irrespective of the identity of the redeemer, “Separately and together, we must work to bring justice and peace to our world guided by the vision of the prophets.” All humanity stands in responsible relationship to God [our Creator] and in a network of relationships that bond us as responsible for one another.

I would like to add further comment of a dear friend and elder statesman of Jewish-Christian dialog, Isaac C.Rottenberg (of blessed memory), a Jewish believer in Jesus, who in an article on the thorny issue, Christian Witness to the Jewish People, questions: “How does one witness to a people who have given and are still giving the Word of God’s Torah to the world?” He points out the fact that while, for example, “… the Catholic Church does not proselytize Jewish people or promote any kind of missionary effort that targets them for conversion, neither does she fail to witness to them her faith in Christ.” Being a witness is a mandate to the Church but the form that witness takes makes a crucial difference. As Jesus said, “By this [the love evident in their lives and relationships] shall all men know that you are My disciples.”

Isaac Rottenberg also concludes, “…that there are commonalities [between Christians and Jews] to be explored that could prove to be a blessing to the world. I am one who hopes for the conversion of the Church, and who believes that Torah insights can greatly help us move in that direction. …The radical changes that might ensue in the way Christians think, theologize, and act could be of world-historical significance. Furthermore, the tensions we cannot escape could lead to a common voice on critical issues that afflict a world in crisis.”

2 thoughts on “How Jewish are the Gospels?”