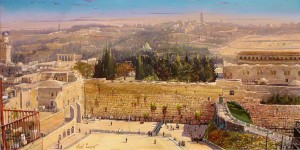 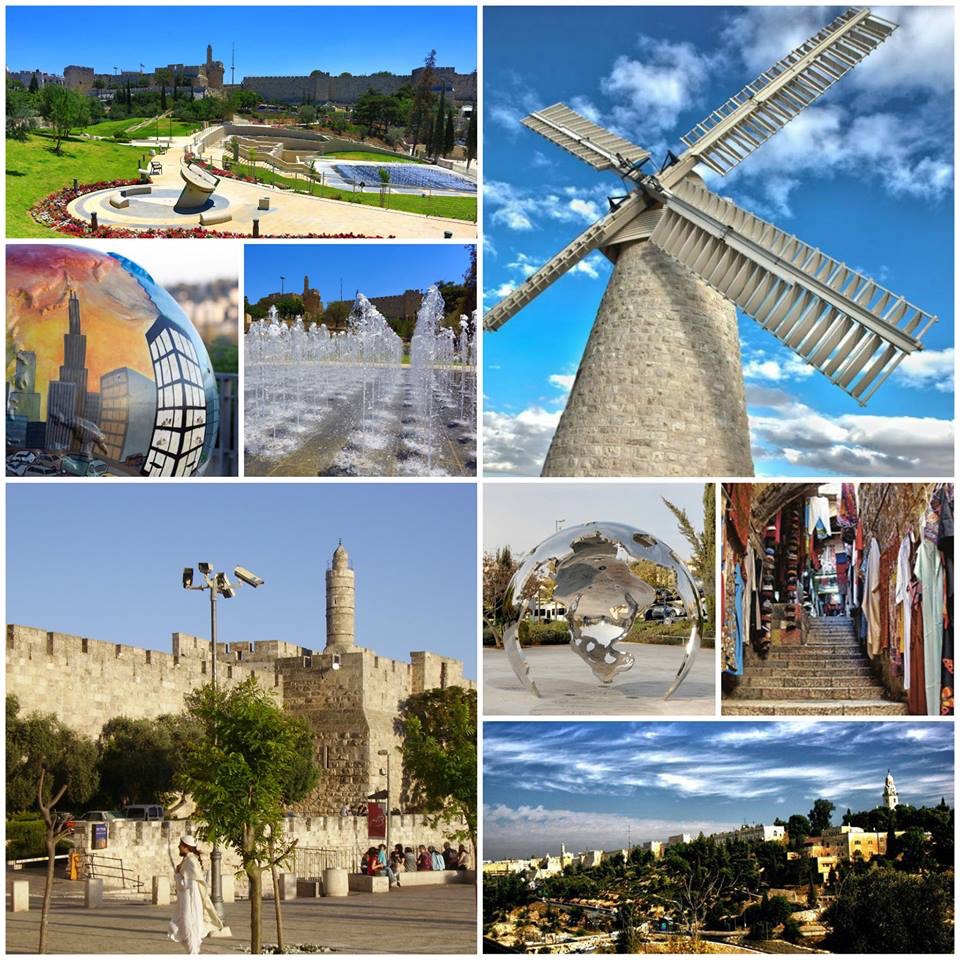 Today, Jerusalem can be compared with a multi-faceted jewel—each facet reflecting the amazing variety of different communities that comprise her population. There are the Jewish groups such as the Askenazi, Sephardi, Bukharan, Ultra Orthodox, Modern Orthodox, Traditional, secular, and immigrants from countries worldwide; also the minority Muslim, Bedouin, Christian and Armenian groups; and, the rich, middle class and the poor of each of these!

Teddy Kollek, world-renowned former mayor of Jerusalem for twenty-seven years, wrote in his greetings at the start of the beautifully presented book, “To Live in Jerusalem”:

“The threads that bind Jerusalemites to their city are firmly woven into an urban tapestry unique to Jerusalem. Some homes, where one family has lived for generations, embody a whole chapter in the history of the city. [Jerusalem] is a tapestry of Jewish, Muslim, and Christian houses; of seventh-generation residents, and of newcomers building homes to replace those they left in Kiev, Adis Ababa, or Chicago. “ 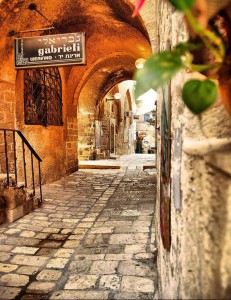 The myriad ethnic and religious groups inhabiting Jerusalem through the centuries have built their own religious and secular buildings, which indeed create a unique and enchanting mosaic. To fully explore the many elements of this mosaic would take a lifetime.

The texture of the neighborhoods is varied and fascinating, from the dense, random weave of the clustered buildings of the Old City which create a picturesque maze of narrow, winding alleys, to the first neighborhoods that sprang up outside the Old City walls in the late 1800s. Each community is characterized by its religious and ethnic traditions and lifestyles. The New City’s well-planned “garden” neighborhoods of the British Mandate period, such as Rehavia and Baka, continue expanding into the modern neighborhoods of today with their Western style, spacious high-rise apartment blocks, and clusters of duplex townhouses (called “cottages”).

However one views the vital, energetic metropolis that Jerusalem has become, the sanctity of Jerusalem is the component that is still the focus and impetus of the dynamic mosaic.
It is this aspect that has engendered the claims and contentions over her. The very fact that she was chosen by the Creator of the universe and designated as the “Holy of Holies” of the earth, HaMakom —“the Place” He has chosen to set His Name forever (I Kings 9:3)—ensures that she will always be the seat of the struggle for warring religious spirits; each seeking to establish dominance in God’s place. However, there is only One true God, the Holy One of Israel, and although He may allow an “abomination of desolation” to set itself up on His Holy Mount, it will only be for a season and according to His purposes. For, as foretold by the prophet Isaiah, in His perfect timing His Anointed—the King of kings and Lord of lords—will rule and reign from His Temple, which will be standing on its designated Mount—Zion, at the heart of Jerusalem.

“And they will fall by the edge of the sword, and be led away captive into all the nations. And Jerusalem will be trampled by Gentiles until the times of the Gentiles are fulfilled.” (Luke 21:24)

Situated as she was at the crossroads of major ancient trade routes, Jerusalem was historically traversed, and many times throughout history “trampled” by gentile nations. King David established Jerusalem as the capital of the Kingdom of Israel in 1004 BCE. Forty years later, his son and heir, Solomon built the first Temple as the spiritual center of the people of Israel. The first destruction of the city, including its Temple, occurred in 586 BCE when the Western the Babylonian king, Nebuchadnezzar, conquered Jerusalem and forced the Jews into exile in Babylon. By the middle of the 5th Century, the Jews had returned to their Land, the Second Temple was completed and, under the leadership of Ezra and Nehemiah, the city was again physically and spiritually strengthened.

In 332 BCE Alexander the Great conquered Jerusalem, but he was so impressed by her beauty and the Temple worship that he left the city intact, although under Greek control and influence. The Seleucids of Syria then attacked and conquered the city in 199 BCE. About 30 years later the Maccabian Revolt against Hellenistic domination occurred. As related in the resulting celebration of Hanukkah, Judah Maccabi and his brave band, against overwhelming odds, restored Jerusalem to Jewish autonomy and cleansed and rededicated the Temple. The Hasmonean (Maccabi) Dynasty only lasted about 100 years, until the Roman invasion lead by Pompei in 63 BCE. Rome clamped down on Israel with an iron fist, forcing the people into submission under her authority. However, the Jews were given freedom of worship, and when Herod was appointed ruler of Judah by the Romans in 37 BCE, he restored and enlarged the Temple to something of its former beauty.

“Blessed is He who comes in the Name of the Lord!”

During Herod’s reign, the Messiah Mashiach ben Yosef was born. Much of Yeshua’s ministry was centred in Jerusalem around the Temple, until His crucifixion and resurrection in 33CE. He was given a kingly procession on what He knew would be His final Passover. As He entered the city riding a young donkey, the throngs of worshippers waved palm branches and hailed Him, “Blessed is He who comes in the Name of Adonai, the King of Israel!” (John 12:13) He knew what lay before Him, and what tragedy would befall this beloved city, and as He looked at her from the Mount of Olives that very day, He wept.

In 70 CE, nearly forty years later, the Jewish people again revolted against the oppressive rule of Rome, and Jerusalem and the Second Temple were destroyed after a lengthy Roman siege. In the year 324 CE, Jerusalem came under Byzantine rule when the Roman Empire officially became Christian under Emperor Constantine. The beleaguered city then fell to the Persians (614 CE) was recaptured by the Byzantines (629 CE) and was conquered by Arab Muslims (638 CE)—when the Dome of the Rock and Al Aqsa mosque were built in the place of the Holy Temple. Jerusalem remained under Moslem domination for more than four hundred and fifty years until she was captured by the Crusaders in 1099. Less than one hundred years later, Saladin recaptured the city and the Mamelukes ruled the city until 1516, when the Ottoman Turks possessed her. The Jewish inhabitants led a fairly peaceful, if extremely impoverished, existence during the reign of the Turkish Ottoman Empire for the next four hundred years, until the establishment of the British Mandate in the region that then was named Palestine.

Toward the end of the Turkish rule, Sir Moses Montifiore—an English Jew and renowned philanthropist who was knighted by Queen Victoria—made a pilgrimage to the Land. The visit had a profound effect on him, as the book “Jerusalem Journeys” records:

“I still remember the effect the visit had on me. The historical memories were strong and impressive, but the reality was really quite dreadful. I have traveled all over the world, but I don’t recall a more shocking sight than the beggars of Jerusalem. … Not all the beggars were Jewish, of course—only around half the population of the city is Jewish—but enough were. They came swarming round like flies… such neglect, such poverty—and this in a city holy to all mankind and especially to us Jews. I was deeply shocked and there and then I made an oath to myself that I wouldn’t rest until I had done something to alleviate the terrible state of the city. For those Jews who are in Palestine or those who want to go there to live, the situation there must be entirely transformed. And in this transformation, I have sworn I will play a part… With the help of God and the grace of Queen Victoria, I will do whatever I can to bring the aid of western Jewry to bear on the fortunes of our less fortunate brothers.”

Montefiore thereafter worked tirelessly for sixty years until his death when he was more than one hundred years of age. He undertook seven trips to Jerusalem and the Land, during which he made huge contributions and improvements in the conditions, including the establishing of the first neighborhood outside the walls of the Old City. The neighborhood, inaugurated in 1860, consisted of twenty homes, a windmill and water cistern, and was given the optimistic name of Mishkanot Sha’ananim (“Dwellings of Tranquility”). Today it has developed into an elite and picturesque neighborhood called Yemin Moshe—named in honor of the man who had determined to make a difference and who, among his many philanthropic endeavors, in effect pioneered the New City of Jerusalem. 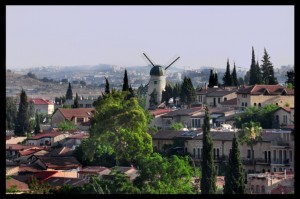 At the end of 1917, thanks to the efforts of the Zionist movement lead by Theodor Herzl, and championed in England by Chaim Weizmann, Britain had issued the Balfour Declaration, which recognized, “…the establishment in Palestine of a national home for the Jewish People and [Britain] will use our best endeavors to facilitate the achievement of this object.”  Of course, the implementation of the Declaration was no easy thing, and great and vehement opposition was encountered, including the obvious Arab antagonism as well as unexpected antagonism from some British aristocratic Jews. It was therefore only in 1948, after the shocking and tragic perpetration of the Holocaust, that the internationally recognized State of Israel was declared.

The following year, after the newborn State miraculously overcame the onslaught of five Arab armies in the War of Independence, Jerusalem was proclaimed the capital of Israel once more, after two thousand years of waiting and longing. Yet, East Jerusalem and the Old City, including the Jewish quarter and its heart—the Kotel, the Western Wall—remained under Jordanian control. However, after another concerted attack on all fronts by the Arab armies in 1967, Israel scored another miraculous victory in just six days and, as a result, Jerusalem was reunified under Israeli control.

The Jews had finally come home to that which had united their hearts for centuries; to the place toward which, from the ends of the earth, Jewish communities had turned their faces every day in prayer—the Kotel—the last remaining fragment of the Holy Temple in Yerushalayim. The visible promise of the Dwelling Place of God that will fully be restored in its rightful place once again. 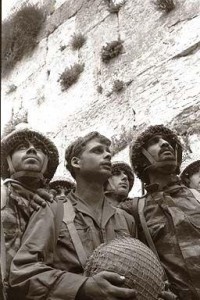 Liberation of the Kotel in 1967