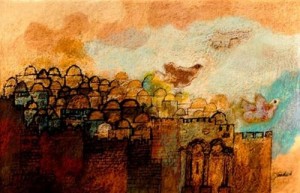 His foundation is in the holy mountains. The LORD loves the gates of Zion more than all the other dwelling places of Jacob. Glorious things are spoken of you, O city of
G-d. Selah.

…Of Zion it shall be said, “This one and that one were born in her”; And the Most High Himself will establish her. Then those who sing as well as those who play the flutes shall say, “All my springs of joy are in you.”* 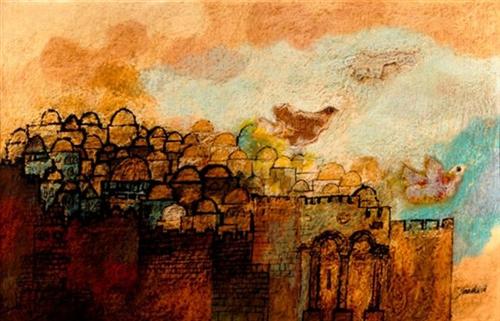 A description by the composer, beloved songwriter in Israel – the late Naomi Shemer, of her inspiration for this song:

The idea I started with was the Talmudic legend I remembered from my school days about Rabbi Akiva, who lived in poverty, in a hayloft with his beloved wife Rahel, who had been disowned by her father. As he plucked the hay out of her hair, he promised her that one day he would become wealthy and buy her a Jerusalem of Gold [a tiara]. . . . The phrase ‘Jerusalem of Gold’ suddenly shone in my memory as if to say, ‘Here I am,’ [Jerusalem was with us again] and I realized it would be the cornerstone of my song. – Naomi Shemer

Based on a Basque lullaby, this soul stirring song was composed at a time when the Old City was completely in Jordanian hands. Written by Naomi Shemer for the 1967 musical festival, Jerusalem of Gold expresses the longing of the Jewish heart for their beloved city, Jerusalem.

Naomi asked Shuly Nathan, at that time an unknown folk singer, to perform her song at the music festival. Jerusalem of Gold was so well received, Shuly was asked to sing it a second time.

Just three weeks after the debut of Jerusalem of Gold, the Six Day war broke out and Jerusalem of Gold became a psalm and a prayer for the Jewish people. Seven days later, IDF paratroopers liberated the Old City. For the first time in nineteen years Jews were able to approach the Western Wall. The paratroopers cried, they prayed, and they sang  Yerushalayim Shel Zahav – Jerusalem of Gold. When Naomi heard that the soldiers had sung her song at that time she wrote a final verse recalling the sound of the shofar blast, by Rabbi Shlomo Goren, that heralded the liberation of Jerusalem.

Jerusalem is sacred to the Jewish people. This Holy City, and Israel as a whole, is a promise and hope given to them from G-d. Many of us who are not Jewish by birth, but are grafted into the olive tree, pray for Jerusalem every day and yearn for the time our feet will walk its streets. We long for Yeshua’s return and for this city that is eternal. We yearn for the time when Jews and the nations join together to worship the LORD in Zion! And this song, Jerusalem of God, stirs the strings of our hearts also. Jerusalem is precious to the heart of G-d, and that which is precious to G-d is precious to those who love Him.

I saw the Holy City, the new Jerusalem, coming down out of heaven from G-D, prepared as a bride beautifully dressed for her husband.***

You may download the lyrics to Jerusalem of Gold here.

Listen to Jerusalem of Gold, sang by Ari Goldwag, posted below.
and / or
download for free via iTunes

Also below, you may listen to Shuly Nathan singing Jerusalem of Gold – France, 1968.

P.S.   For a beautiful rendition of ‘Jerusalem of Gold ~ Yerushalaim Shel Zahav‘ see also Yossi Azulay’s version on You Tube, or on his Tefillot – Prayers album.

Jean David was a painter and designer, known for his contributions to the Romanian avant-garde and to the early modernist art of Israel (then recently founded).

He has studied between 1927 and 1937 at various art academies in Paris. In 1929 he participated for the first time at a collective exhibition in Bucharest and in 1933 he had his first personal exhibition (in the same city). In the early ’30s he was a member of the Surrealist group “unu” (meaning “one”). In 1942, he left Romania in a boat with 12 other Jews, including Theodor Brauner, the brother of Victor Brauner. After being captured by British authorities in Cyprus, he managed to reach Palestrina in 1944. Together with Marcel Janco, he founded in Israel the artist village known as Ein Hod. He also gained much reputation as a muralist and a designer, having designed numerous posters and other works for the El Al air company.