“If in my lifetime I was to write only one book, this would be the one. Just as the past lingers in the present, all my writings after Night, including those that deal with Biblical, Talmudic, or Hasidic themes, profoundly bear its stamp, and cannot be understood if one has not read this very first of my works.” * 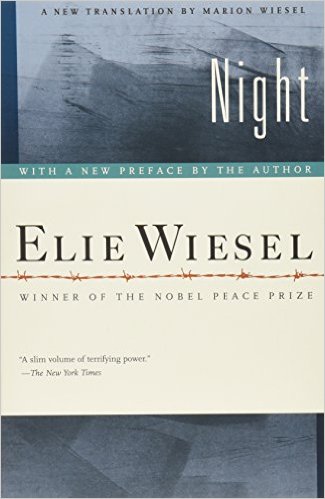 Elie Wiesel was 15 years of age when he and his family were forced into Auschwitz and Buchenwald death camps. It is beyond grievous to imagine the mark that this unthinkable horror, total humiliation, unmatched hatred, and the complete contempt for life would leave on anyone’s heart, let alone the tender heart, mind, and spirit of a young man. The pain and anguish of that time is felt in much of Elie Wiesel’s works but his memoir, Night, is agonizingly raw.

He was deeply sensitive and observant – even as a child – and it helps to keep in mind these words of Elie Wiesel’s as you read Night:

I have never renounced my faith in G-d, I have risen against His justice, protested His silence and sometimes His absence, but my anger rises up within faith and not outside it. I admit that this is hardly an original position. It is part of Jewish tradition. But in these matters I have never sought originality. On the contrary, I have always aspired to follow in the footsteps of my father and those who went before him…It is permissible for man to accuse G-d, provided it be done in the name of faith in G-d.***

Night is a short read, only 120 pages. But it is 120 pages of suffering, horror, and honesty, that will leave its mark on your heart.

Elie Wiesel ( ז״ל) – may his memory be a blessing and may his words continue to bear witness.

Some people might not agree with or ‘like’ Oprah but she was profoundly touched by his memoir Night. This is a sincere interview that started a caring friendship between the two.