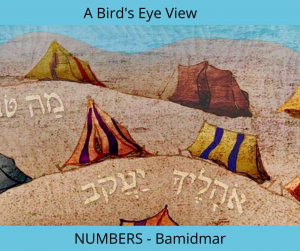 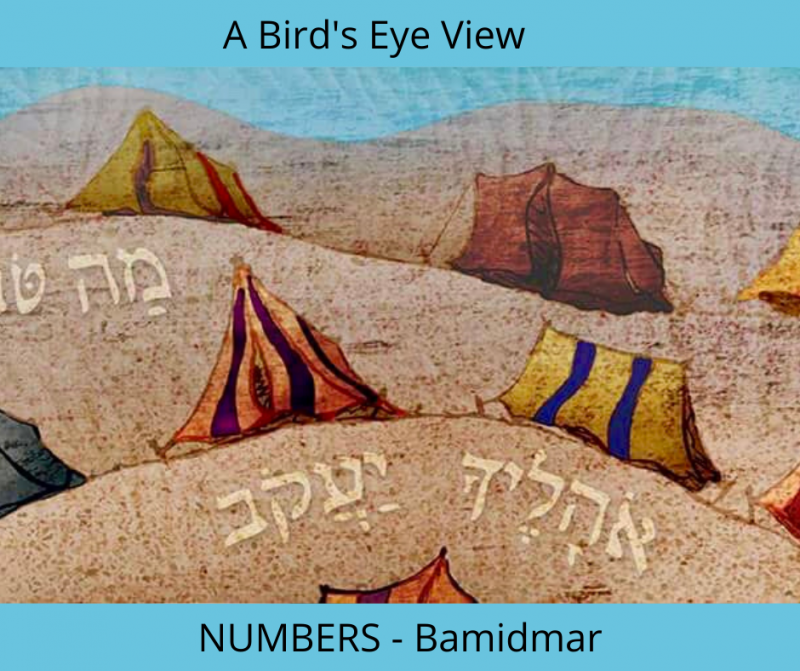 The Hebrew name of this fourth book  of the Torah – Numbers –  is Bamidbar, which literally means ‘In the Wilderness’. We can recall Genesis, B’reisheet – In the Beginning.

We also remember that the second book of Torah, Shemot, described the Exodus of the Israelites from Egypt; and the third book Leviticus, or Vayikra, described the ideal “kingdom of priests”  – illustrating to the newly redeems slaves how to walk in holiness as a nation in service to God, rather than in slavery to Pharaoh.  Now, in the book of Numbers, we discover that the transition from slavery to royalty is not instantaneous, and we face the down-to-earth reality of people as we really are – stubborn, weak, complaining, and often annoying! The transition requires the journey through the wilderness. It happens bamidbar!

But, we may ask, why did God choose this particular setting to give the glorious revelation of Himself and His Word to His people? We remember how Moses, while a shepherd in Midian, was drawn to this same place like a magnet. Exodus 3:1 tells us: “Moses…led his flock to the west side of the wilderness and came to Horeb, the mountain of God.” He stopped and turned aside to pay attention to a bush that was burning and was not being consumed by the flames. There God met him and called Moses to return to Egypt and to lead his people out of slavery. With God’s help, the Exodus happened, and now we see Moses leading his “flock” back to the same mountain in the wilderness!

FROM GARDEN TO WILDERNESS

In the beginning, at Creation, God created man to be beautiful, in a beautiful setting, and enjoying great beauty.  Gan Eden –  The Garden of Eden was a beautiful setting for this beloved creation of God. It was a place traversed by flowing, sparkling waters and filled with lush foliage and flora of dazzling color – pleasing to all the senses. The rigors of demanding work and any struggle against the elements were unknown. Man and beast lived in tranquil unity and the Spirit of God permeated the entire expanse. It was ideal. It was paradise.

The desert wilderness we read of as we start our journey, together with the Israelites, through the book of Bamidbar appears as the very antithesis of Gan Eden. All its elements seem in opposition to man. It is desolate; seemingly empty and barren of life. It is either too hot or too cold, and a place devoid of hope. The desert in which the Israelites find themselves is described in Deuteronomy 8:15 as: “…a great and terrible wilderness, with venomous serpents and scorpions, and waterless, thirsty ground.”

The environment of the wilderness reflects the effect of sin on the soul – and illustrates how far man has fallen from God’s original intent. This realization should serve to draw one back to God’s ways of peace and pleasantness; of wholeness and spiritual abundance.

Physically,  to survive in the wilderness, man needs 3 things – shelter, food, and water. God proves His love and faithfulness by providing these things Himself:-

God provides the physical essentials in order that the focus be on the mental and spiritual aspects of the 40 year wilderness journey. It was meant to be a challenging and difficult journey of self-understanding – a discovery of the human heart in relationship with God.

As the slave mentality comes to understand the reality of freedom – the ability to question and make decisions, to set free the imagination, and to gain knowledge of God and an understanding of His ways In so doing a person becomes transformed and re-imaged, as it were, to reflect the image of God in which he or she was created.

The Israelites had been brought from a place of death, where their voices had been silenced.

A slave can have no individual identity or voice of expression, and, in Egypt, all they could do was groan and cry out in pain. Then, they passed through the waters of the parted Sea and were born again into a life of freedom. Here, in the wilderness, they had heard God speak. The Hebrew root word for wilderness – midbar, and speak – diber are the same! Now, they are being given the ability to speak, to pray, to sing, to have a voice. However, like a child discovering its own independence, the voice is often stubborn, willful, and rebellious!  This is the difficult drama, with all its potential and passion, of the book of Numbers. Moses and Aaron, as leaders, must face the challenges.

This drama is highlighted in the account of the sin of the Golden Calf. Moses had disappeared up the mountain. Over 30 days have gone by and he has not returned. The people believe they have been abandoned and need a tangible ‘god’ to lead them. They regress to the memory of the gods of Egypt and rise up and force Aaron into overseeing the fashioning of a calf of gold. God sends Moses back down the mountain to the people, and we know the story…

The conflict is dealt with. Moses draws a line in the sand and gives a choice: “Those who are for God come to me.” The perpetrators are punished, 3,000 die, and order is restored. However, soon enough, the second major crisis of the ten spies occurs and the familiar refrain of complaint arises.

The Israelites had arrived at a the edge of the land promised them by God, but when the spies return with the bad report of the great cities and the “giants” who lived there, the hearts of the people fail them – they see themselves as “grasshoppers” – powerless insects, and there is a terrible night of weeping. Despair has set in and hope is gone. The vision has dimmed and their faith has vanished – both in the power of God to give the victory and in His love for them.

We see a classic illustration of the fact that those who have suffered the abuses of slavery, or any abuse, harbor a deep doubt about their being loved and of their capacity to give love. Author, and Torah teacher here in Jerusalem, Aviva Zornberg, points out in her commentary on Numbers:

The Revelation at Sinai perhaps aroused in the people an unbearable complex experience of bliss and terror.The [deeper] subject of this Book of the Wilderness is the response of  the people to this encounter with the Divine. God gives the Torah; now the issue is the human reception of the gift.

Are they able to take it to heart and believe His words with unshakeable faith? Sadly, we read that this generation – called Dor Ha’Midbar  – the Wilderness Generation, apart from Joshua and Caleb, would sink into the sands of the desert and would not enter the Promised Land. We can hope and trust that by the end of the journey, described in the book of Deuteronomy, that they continued to learn and grow in their relationship with God and that their faith and trust in Him was restored.

The wilderness is a place of infinite potential that one day will blossom and sing for joy, as we see physically here in Israel in our time. Praise God! As the words of the prophet Isaiah tell us:

The wilderness and the dry land shall be glad; the desert shall rejoice and blossom like the crocus;  it shall blossom abundantly and rejoice with joy and singing.        (35:1-2)