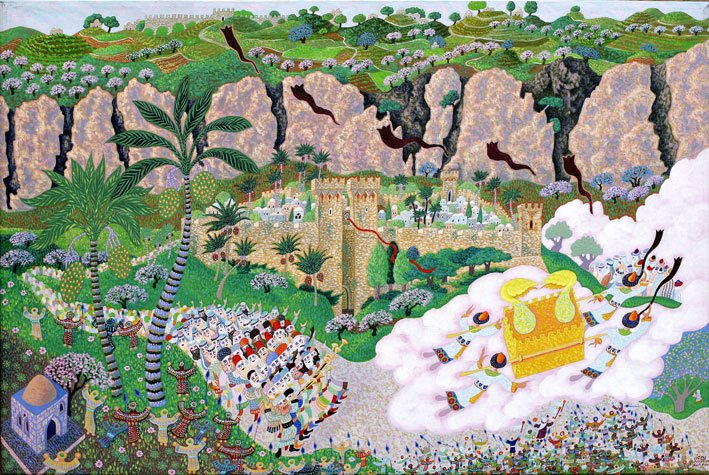 During the years of his reign, King David faced many moments when his kingship and kingdom were threatened. Psalm 132 is a prayer and reminder, as it were, to God and himself, of the immutable bond and covenant between the Almighty, the Davidic line and the capital, Jerusalem. David also stresses the troubles he had undergone and the efforts he had made in seeking the right place for the building of God’s house, the securing of the Ark, and the ammassing of all the materials necessary for building. He anticpates that God will enter His dwelling-place , where he and the people “will prostrate ourselves at His footstool” (verse 7). As glorious as the Temple would be, in regard to the great glory of God, it could only represent His “footstool.” In comparison, the heavens are called, “the throne of the Lord” (Isaiah 66:1).

This is the only psalm that refers directly to the piece of Tabernacle furnishing that symbolized the Shekinah Presence of  God – the Ark of the Covenant (v.8). The text also reflects the journey of the Ark, which first was housed at the village of Ya’arim; here referred to as s’dei Ya’ar, the “fields of Ya’ar” (verse 6). This was situated near the town of Bethlehem Ephrata, the birthplace of King David and of the Messiah of the line of David. Later, as we know from the biblical narrative, the Ark was brought up to Jerusalem by David with great rejoicing and celebration. There it was kept in temporary housing until it  finally was moved to its “resting place” – the innermost Holy of Holies in the Temple built by Solomon.

The reign of the Davidic dynasty lasted 400 years until the destruction of the First Temple. Verse 12 sets a stipulation for the earthly descendants of David in order to retain the kingship: “If your sons will keep My covenantal decree that I teach them, then their sons also, for all time, shall sit upon your throne.” Only David and Solomon ruled over all Israel. Their successors fuctuated in their obedience to God’s commands, not recoginizing Him as the true King over all, and would reign only over the Southern Kingdom of Judah and Benjamin until the country was overtaken by the Graeco-Roman Empire.

In spite of the destruction of the Second Temple and the loss of rulership over the Land, David has the assurance of God that He has chosen Zion and He promises:

“This is My resting place forever; here I will dwell, for I have desired it” (verse 14).

He continues to promise that  He would bless with provision all who came to His House and the needy would always have bread. The priests would be clothed with deliverance and the righteous ones filled with songs of praise! This is a refrain of the prayer of Jacob when he stopped to sleep at Mount Moriah on his flight from Esau. He vowed that if  God would “…give me bread to eat and clothing to wear” (Genesis 28:20) and would return him to his Father’s House, which can well  be seen as a prophetic reference to the site of the Temple, “…then the Lord shall be my God.” If God would sustain him and return him to this land of his father Isaac, then he would be assured of the faithfulness and sovereignty of God.

Verse 17 records a beautiful promise of God regarding HIs Dwelling place in Zion:

There I will cause pride [ a horn of provision keren and power, shofar] to sprout for David, for I have prepared a lamp [ a candle ner,  a light of truth, menorah]  for My anointed [Meshichi, My Messiah].

From David’s line would arise the Messiah, the anointed king of God. The splendor of Messiah will become evident in that very place. Jerusalem, the City of David in Zion, is also the City of the Great King, from whence His glory and might will become evident to all when, as promised in the final verse: “His enemies will I clothe with shame; but upon Him will His crown shine.” 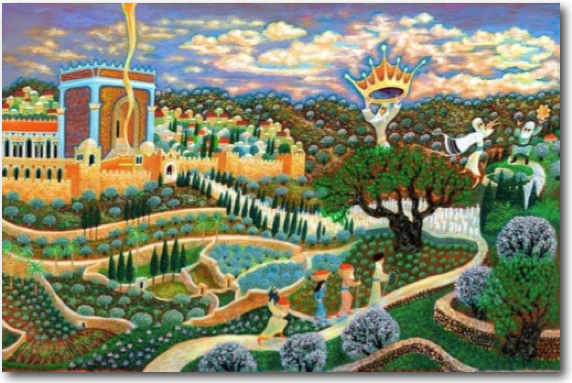