Yesod: Connection and Bonding, Joseph, and the Color Brown

Breath, which I draw in, from You it comes,

Light in my eyes, from you it alights,

Advice which I follow, it is grounded in You,

My spirit, no matter what obstacles it encounters, beholds You, and yields.

On Rosh Chodesh Shvat, Moshe began to explain the Torah to the new generation of Israelites – those who were born during the previous forty years of wandering in the wilderness. His final teachings are recorded in the book of Deuteronomy / Devarim. In Hebrew the book also is called MIshnei Torah – a repetition, or a review in greater depth, of the teachings in the first four books. This indicates to us that the redeemed people of God are required to study the Torah from generation to generation, and to recognize the nuances of the written Word in order to gain deeper understanding of the multilayered meanings implicit in the text.

Shvat is a month in which we are reminded to remain rooted in reality and we also are inspired to soar to the heavens! In Israel and the Northern Hemisphere the shorter days of Winter and the colder temperatures encourage us to draw aside and to look inwardly more deeply. This “coming down to earth” reminds us to remain humble in our attitude and to do our best without any anticipation of the outcome.

Within the ‘natural’ miracles of Nature, God’s control of the universe hides, as it were, beneath the mantel of what we see outwardly. Every sunrise and sunset, for example, is a miracle of His Creation but, because they happen daily, they become routine. We take them for granted and, as a rule, hardly notice the incredible beauty reflected through them. Often, it is only when God breaks through the “natural” with a supernatural miracle that His Presence and “hand” at work in the situation becomes evident. His overt miracles were obvious, for example, at the Exodus from Egypt – yetziat Mitzraim, which we are enjoined to remember every day and to celebrate every year at Pesach. Another less celebrated occasion was, as mentioned last month in Tevet, when Joshua cried to God for more time to overcome the enemy in battle and the sun stood still for an hour.

We all know the benefits, on every level – physically, mentally, and spiritually, of being outdoors and enjoying a walk in nature, whether it be on the beach, in a forest, in a garden, or alongside a river or a lake. We can breathe in the saltiness of the sea air or the abundance of oxygen so freely provided by the trees and plants. On the 15th day of Shvat – Tu B’Shvat – which, biblically, is the New Year for Trees, we have an opportunity to celebrate the wonder of trees. It is customary in Israel to plant new trees and to enjoy a ‘seder’  – a meal to enjoy the special fruits found in the seven species of Israel – olives, figs, grapes, pomegranates, and dates. We value the importance of trees and appreciate their gifts to us. We recall the beauty and blessings of the Garden of Eden. We also look forward to the day of the Final Redemption of the world when all Creation will be restored to its former glory.

Poet, Mary Oliver, wrote in her poem ‘Starlings in Winter’:

and afraid of nothing, as though I had wings.

She was, no doubt, inspired by the murmurations of the starlings. I’m sure we all have witnessed, at one time or another, this miracle of murmuration – the sunset ritual that occurs during the winter months when, for almost ten minutes, clouds of starlings swoop in and out in perfect harmony and in mesmerizing patterns before they settle down for the night. It’s one of the Creator’s breathtaking miracles of design that prevents these creatures from crashing into each other.

A single starling is quite an ordinary little bird. However, when it joins the majestic, swooping dance with hundreds, if not thousands, of others it then presents an event of great beauty and wonder. As human beings we have souls designed to soar and flow in harmony with one another. It is only when a person’s soul has lost connection with its Source and she has lost her way, and the person has forgotten who they truly are, that they blindly bump into, and hurt, or even abuse others around them. When we exercise the qualities of building healthy connections, and bonding in love, we are able to interact with care and with grace.

Shvat is a month when the connections between body and soul, the physical and spiritual, as well as the natural and supernatural, are strengthened. However,

even as we aspire to soar to the spiritual heights intended for our souls, the color brown draws us back to the physical reality of the earth and soil. God created the physical human being from the dust of the earth and then He breathed His spirit into him. We are thus a combination of body and spirit, earth and sky, the natural and supernatural.

A key component in building stronger connections, both in our relationship with God and with others, is that of surrender. Not in the sense of giving up when facing a challenge, but of surrendering to the reality of what is. The teenaged Joseph, when literally flung into a pit in the earth, had to come face to face with the full extent of his brothers’ jealousy and hatred, and their inability to accept his prophetic dreams. He then needed to face the reality of his fall from the position of a favored son to that of a slave. If he had taken it personally, and had wallowed in self-pity and despair, he likely would not have overcome and risen above the circumstances. We see, however, that he was able to accept and surrender to the reality of what was and he was able to serve his master well and devotedly.

Joseph knew the God of his fathers Abraham, Isaac, and Jacob, and he trusted He was with him. Even when he then was thrown unjustly into prison, he showed the same faith and tenacity and he served the prison warden well. We can understand that, in addition, he cared for his fellow prisoners for he knew the details of the imprisonment of Pharaoh’s baker and cup bearer and they came to him for an answer to their dreams. Once again we see how he was called and rose up from the prison and was given the exalted position of governor of Egypt, second only to Pharaoh. Because he accepted every situation and trusted that God was with him through it all, he was always ready and available to do whatever he could to be of help to others. We see confirmation of this when he is able to provide food for his family, as well as many others, during the seven year famine. Finally, he revealed his true identity to his brothers, the family joined him in Egypt, and after Jacob died the brothers thought that maybe now Joseph would take his revenge. However, he says to them (Genesis 50:20):

“As for you, you thought evil against me; but God meant it for good, to bring to pass, as it is this day, to save many people alive.”

Joseph understood that all that had happened was the outworking of God’s plan as revealed to him in his boyhood dreams. We may learn from Joseph that even when we do not understand a particular situation or challenging issue, we can surrender to the mystery and accept the uncertainty of not knowing what will happen next. We can trust that our loving Father is in control and we do not need to despair or attempt to micro-manage the situation. We can, as the saying goes, “let go” and “let God” work things together for the ultimate good – for ourselves and for others.

We also can realize that there is a purpose for all that happens. There is beauty to be found everywhere, even in the dust. The soil is there to sustain new life, and potential, and possibility. A fall or a failure will teach us how to do better next time. Heartache will remind us to be gentle with others. Loneliness will help us appreciate connection when we do find it. Every struggle will remind us to hold close to the people that are in our lives, and to hold closest to love because that is what really matters at the end of the day.

May we value each and every day for the gift that it is and stand strong in the knowledge that God has all things in His faithful and loving hands. 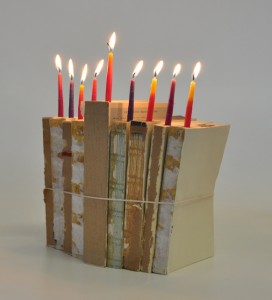  photo credit: Juniper Books As the flickering lights of Hanukkah