A blessing is not said for Rosh Chodesh Tishrei because the month is overshadowed, as it were, by the glory of Rosh HaShanah – the start of a new Hebrew calendar year. Nevertheless, Tishrei is a very special and holy month. It is bursting with festivals, just as the pomegranate – the central fruit of the season, is bursting with luscious seeds! The month of Elul was a particular month for reflection and repentance, and personally meeting with the King, who had figuratively left His palace to draw closer and to be more intimately available to us in the field. The King is now withdrawing once more to His place in the palace.

On Rosh HaShanah, we dress to enter the palace to pass before our King in love and appreciation and to enjoy a festive dinner! Ten days later we draw even closer to His Throne of Glory, so much so, that, dressed in white, we minimize our physicality by fasting in order to draw as close as possible, like the angels, to pray and worship Avinu Malkeinu – our Father and King. We trust for His unconditional love, His grace, compassion, and mercy to surround us and to sustain us through the year ahead.

In the study of Mussar, a key factor is the importance of balance. The attribute of Gevurah – discipline, self-control and courage , is well balanced with that of Elul – Chessed – love and kindness.

Discipline is well described as: “Doing something even when you don’t feel like it!” This maxim can be applied in myriad situations we face through our days; such as making and keeping the dentist appointment, cleaning the house, not finishing the whole bar of chocolate or bag of crisps! You can add another hundred ideas I’m sure. Of course, some are more serious than others but, in general, the more we are able to have the courage to maintain self discipline, the more peace of mind we will enjoy.

The Sages say, in Pirkei Avot 4:1: “He who is slow to anger is better than a strong man, and he who masters his spirit (ruach) is better than the conqueror of a city.”

Emotions play a major role in self control. When a situation or problem arises, our emotions will dictate our response. We need to be aware of the need to develop our mental attribute of Binah, as described by Ezra Jacobs:  Binah is “…the powerful capacity to read and size up correctly the information (Chochma – wisdom) the mind is constantly processing. In sifting through the facts, it controls, molds, and develops our emotional reactions in order that they will be compatible with the objective reality of any given situation.” Gaining deeper understanding requires being able to see further than our personal, subjective perspective in order that we may respond maturely and realistically.

“Essentially, emotional maturity means the ability to do God’s will. Doing God’s will often stands in stark contradiction to fulfilling one’s own personal desires, wishes , or fanciful whims. This battle of wills, at core level, is a powerful emotional struggle.” (Ezra Jacobs – Coming Full Circle )

The major spiritual gifts we have been granted to help us in this emotional “battle of wills” are faith and prayer. Faith in knowing and trusting that our Father always has only our very best good in mind. He knows us better than we know ourselves and, consequently, knows what is best for us. To align ourselves with His will, we need to know His will, and this we can come to know through His Word and through the “still, small voice” of His Spirit. We come to know His Word though study of it and to hear the whisper of the Spirit through prayer, which is called “service of the heart.”  And to better understand this we turn to our forefather Yitzchak!

The most demanding challenge that Yitzchak faced was when his father , Avraham, placed him on the stone altar, overlaid with wood, and Yitzchak saw the knife in his hand lowering to his throat. The realization fully dawned that he was to be the sacrifice. Did he scream, cry, try to wrest free of the binding ropes, tumble off the altar? No..he lay still and, no doubt, prayed. Yitzchak knew his father – the epitome of chessed, and he knew and had faith in their God. If he was to die, it was for a purpose beyond his understanding, but he trusted. Submission took humility; the humility of knowing that he was not in control but that the ultimate control was in the hands of God.

Especially now, in these modern times, we laud being independent and having autonomy. To a certain extent we must take responsibility to take care of ourselves, however, an obsessive need to be in control can lead to pride and manipulation of others. Yitzchak was a strong, successful man, but, as we see in the Torah, due to his humility his personality was outshone by his father Avraham and his son Ya’akov. Nevertheless, he played an important role in the balance between the two. He is depicted as a man who prayed in the field, where he learned to shemah – hear the “still small voice” of God, and to respond in humility and love.

Yitzchak was praying in the field when he looked up and saw the camels bringing the wife God had chosen for him – Rivka. Red is a color associated with love and the Torah first uses the word ahavah – love, in the context of their relationship.

Red is not a passive, peaceful color. It doesn’t wait quietly in the wings, like a wallflower. It is passionate and intense. When you see red you know something is happening. It’s warning you to take heed and stop, like a red traffic light or a red flag, or a red cape to a bull. When you “see red” it means emotions are raging and in danger of going out of control. And yet, the associations are not all negative. Red is associated with love and was included in the materials of the Tabernacle and Temple.

Each color has its own range and spectrum of brightness. Red has hues ranging from dark crimson to faint orange. John O’Donohue describes the beautiful aspects of red:

“The night breaks when the red fire of dawn is kindled and the world glows again in the beauty of color. …Red is a threshold color; it tends to accompany and intensify beginnings and endings.”  Think of a woman’s menstrual cycle and birth…always accompanied by blood. And the verse: “Life is in the blood.” (Leviticus 7:11).

O’Donohue again describes: “ Blood is the fluent stream that keeps the body alive, forever flowing out from and flowing back into the red well of the heart.”

Red is reminiscent of the river of lava that flows from  a volcano; evidence that the heart of the earth is not solid stone but a boiling fiery sea of magma. Fire can be a great and terrifying danger but when contained it provides warmth, light, and comfort.

The hem of the Garment of Glory of the High Priest was adorned with golden bells and pomegranates of red and blue. Perhaps to remind us that if we desire to hear the sound of the presence of holiness we need it to be accompanied by the passion of red bound together with the peace and stillness of blue. Again, a balance.

Dear friends, as we step over the threshold into the new year of 5783, we can remember that we still are in the decade of the Peh (mouth) [80 is the numerical value of the letter Peh]. It is vitally important to be aware of how we speak and what we proclaim during this decade. Prayer, praise, and positive  proclamation of the truth of God’s Word should be flowing from our mouths. The letter Gimel is comprised of a vav, with a yod extended like a foot, indicating a person in motion. Gimel is related to the gemol, meaning ‘giving.’ The Sages say it represents a rich man running after a poor man in order to give him tzedakah – charity.

The numeric value of the letter Gimel is 3. Three is a number of bonding. “A three stranded cord is not easily broken” (Ecclesiastes 4:12).  There are three parts of the Hebrew Bible – Torah, Neviim and Ketuvim – the Torah, the Prophets, and the Writings. The Sages say: “Three bonds are bonded together: Israel, Torah, and God.”

Having a giving and generous spirit enables one to reach out, to go the extra mile, and to encourage and support others when we can; all of which strengthens bonds and creates unity.

May our hearts be stirred to be givers, and let us go forward into the year in faith and trust, filled with grateful praise.

For the sake of His Name in love, 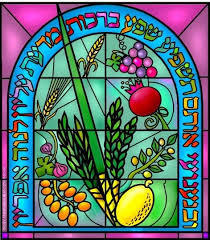 SUKKOT – SEASON OF OUR JOY – A HARVEST FEAST ~