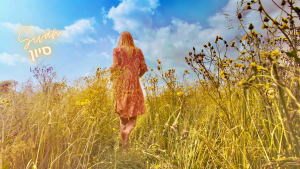 There is a voice that doesn’t use words. Listen!

This is the third of the five steps at the heart of this cycle of BeIng Holy BeIng Whole. We are aiming to replace unnecessary effort with ease, clutter with clarity, irritating drama with inspiration. Hopefully, after Nissan, we now are more aware of slowing down. And, after Iyyar, with its theme of simplifying, we have experienced how the biggest changes, ironically, come from taking the smallest steps. As we go forward we, hopefully, can continue to make the necessary time for ourselves. Then, as our awareness expands and our perspectives continue to be enhanced, may we feel increasingly more fulfilled and at ease physically, emotionally, mentally, and spiritually.

We should be immensely grateful for our five senses – sight, hearing, smell, taste, and touch. However, we tend to take them for granted, unless, G-d forbid, we lose one or more of them; as happened to some who suffered the unfortunate side effects of losing their ability to smell, and/or taste due to CoVid. As we age, too, we notice the weakening of our eyesight and the diminishing of our capacity to hear well.

We have another sense that is not listed among our physical senses –  a sixth sense, which although difficult to define or explain, is certainly very much there.

One definition I came across describes intuition as an ability to understand or know something, often immediately, based on your feelings rather than on facts. An ability to understand something instinctively, without the need for conscious reasoning. A common description is that of a “gut feeling.” A lovely Native American proverb says: “Listen to the wind, it talks. Listen to the silence, it speaks. Listen to your heart it knows.” A wise question to ask when needing to make a decision in a complex situation is, “What does your deepest heart tell you?”

“Never apologize for trusting your intuition – your brain can play tricks, your heart can blind, but your gut is always right.”

“Pay attention to your gut feelings. No matter how good something looks, if it doesn’t feel right – walk away.

A serious question we could raise is, “Does that mean we don’t need to think about anything – just trust our feelings?” The answer of course is negative, that would be foolish and sometimes even dangerous. Intuition seems to require a balance of mind and heart – of thought and feeling. Someone commented: “A quiet mind is able to hear intuition over fear.” When faced with an important decision we often can overthink and allow fears and doubts to cloud our minds. After giving the situation thought and due diligence, we then need to quieten our mind and listen for that “still, small voice” that doesn’t need words.

A quote I like is: “Intuition is the compass of the soul.”

Through our journey of life, the body is the vehicle and the soul is the compass. By following its voice, which is directed by the Spirit of G-d, we will remain focussed on our direction, and each  step – each day, will bring us closer to our destination. Each day will be meaningful because it will be centered on our main purpose in life – the reason we are here at all.

In general women are considered to have greater intuition than men. Two women commented:

“Follow your intuition. Be smart, be brave, tell the truth. And don’t take any nonsense.” Kelly Cutrone

“Our intuition is like a muscle, we must practice listening to it and trusting its wisdom. When you take the time to ask and keep listening for the answer, being at peace becomes easy.” Lisa Prosen

“The intuitive mind is a sacred gift and the rational mind is a faithful servant. We have created society that honors the servant and has forgotten the gift.”

And:  “Intuition does not come to an unprepared mind.” ~ Albert Einstein

“Intuition is a very powerful thing, more powerful than intellect, in my opinion.” And:

“Have the courage to follow your heart and intuition. They somehow already know what you truly want to become. Everything else is secondary.” ~ Steve Jobs

The intuitive voice of the soul is a call to a spiritual view of reality. We see an example of this in the fourth book of the Torah Bamidbar/Numbers that we read during this month of Sivan. It was the call G-d was making to the Israelites when they reached the border of the Land He had promised to their forefathers.  The twelve spies had been sent in to scout the land. The call necessitated the belief in a truth that was beyond the mundane reality the could see around them. Only two had that vision – Joshua and Caleb; and they said: “Have no fear, the LORD is with us.” (Num.14:9). The remaining ten spies, however, were filled with fear and their report was the one the people believed. Had they chosen to believe Joshua and Caleb they could have marched forward and claimed the glory of their inheritance.

In his book the artist’s Torah,  author David Eberbach describes observations of fellow creators. Poet, Allen Alterman says that this spiritual view of reality “…means transcending the eyes. Beyond the range of vision is the future, the hidden essence of the present.” Marc Chagall, in his autobiography, wrote:

I roamed about the streets, I search and I prayed:

“God, Thou who hides in the clouds or behind the shoemaker’s house, grant that my soul may be revealed, the sorrowful soul of a stammering boy. Show me the way. I do not want to be like all the others. I want to see a new world.”

Only art penetrates what pride, passion, intelligence and habit erect on all sides – the seeming realities of this world. There is another reality, the genuine one, which we lose sight of. This other reality is always sending us hints, which, without art, we can’t receive.”

Following the example of our great Creator, we need to express our creative gifts and to appreciate those of others in order to transcend the physical realm and soar in the vision of the spiritual reality.

We find many interesting patterns in the Torah and in Nature. Think of the pattern of seven – the seven days of Creation, a week, Passover and Sukkot – seven day festival, the seven weeks of the Omer; the musical score, the colors of the rainbow, the seven basic character traits, etc.

The pattern of five include the five books of Torah and the five levels of the soul, Rabbi Shmuel Reichman points out that  every creative process is comprised of five steps:

We can see this illustrated, for example, in the building of a house and how it progresses from the first inspiration to the final completed structure.

Rabbi Reichman also illustrates how the Torah reflects this creative process in the five books of the Torah.

May you find new joy and creativity through your senses, and your intuition, this month!