It is wise to determine the truth of a matter before we fully invest our trust in anything or anyone. On the other hand, we need to be aware of the fact that one’s view of ‘truth’ is established according to one’s understanding, which is, more often than not, very subjective. People tend to believe what they want to believe, rather than assessing facts from a wider perspective outside of their personal inclinations. We can assume, for example, that both sides in a battle believe that their cause is right and true. Ergo the opposing side is the “enemy” and is wrong and wicked. Without an absolute, enduring basis for truth men will simply choose to believe and to do whatever suits their own selfish purposes. We each are responsible for our beliefs and choices, and can probably give good justification for them, but King Solomon cautions: “Every way of a man is right in his own eyes, but the Lord weighs the heart” (Proverbs 21:2). Our Creator clearly sees and knows the full truth and the deepest motivations of our hearts.

The prophet Jeremiah makes a powerful proclamation to the people of Israel: YHWH Elohim emet! “The Lord thy God is Truth!” (10:10). The Hebrew word meaning truth – emet; spelled aleph, mem, tav, read from right to left – is very revealing. Aleph is the first letter of the Hebrew alphabet, mem is in the center, and tav is the last letter. For something to be true it must be comprehensive – true from beginning to end. Just as God says of Himself: “I Am the first and the last” (Isaiah 44:6).

The Hebrew Scriptures, which we believe to be the foundation and measure of all truth, is comprised of letters of the Hebrew Aleph-Bet (alphabet). In fact, the Sages of Israel point out that they were used at Creation when God spoke all things into being. They carry life. The gospel of John describes how this same Word of life “became flesh and dwelt among us, full of grace and truth” (1:14). In John’s mighty vision after the Resurrection and Ascension, the Risen Lord says: “Fear not, I Am the first and the last, and the Living One” (Revelation 1:17). And again, in Revelation 22:13, Yeshua proclaims: “I Am the Alpha and Omega (the Aleph and Tav), the first and the last, the beginning and the end.”

Aleph, as the first letter, has the numerical value of 1. It is therefore fitting to represent the One God of the Universe, Elohim; which, in Hebrew, also begins with an aleph. He is the Creator and Source of all life. Interestingly, the first two letters of the word emet spell em, mother, signifying birth – the beginning of life – and the last two letters spell met, meaning death. Our Father God watches over us in truth every day of our lives, from the first to the last! In the context of time and life, aleph can represent the past, mem the present, and tav the future goal. The letter mem, being in the center, is the letter of transition from first to last, the bridge, as it were. It is appropriate, therefore, that the middle letter mem begins the word Mashiach, Messiah! In Messiah the past is contained and the future is born.

Mem also is the initial letter of the word mayim – water. Messiah Yeshua embodies the life-bearing Water of the Word, as he proclaimed at the water pouring ceremony at the height of the joyous Feast of Tabernacles celebration in the Temple: “If any one thirst, let him come to me and drink. He who believes in me, as the Scripture has said, ‘Out of his heart shall flow rivers of living water’” (John 7:37-38). As we immerse our lives in his, the past is cleansed and the prospects for the future are born. In Messiah we find the place of perfect transition and change. One re-enters the stream of time born anew, and can walk forward into the future as a new creation bearing the living water of his resurrection life.

I Understand, Therefore I Believe?

King Solomon is considered one of the wisest men who ever lived. Leaders and scholars travelled from the far corners of the world to consult with him and to learn from his great store of wisdom. In reference to certain laws of life and the Torah, such as the Red Heifer (Numbers 19:2), Solomon proclaimed, “All this I have tested by wisdom; I thought I could be wise; but it was beyond me” (Ecclesiastes 7:23). He acknowledged that full understanding of the Word of God is beyond the limited reason of man. As finite beings, how can we possibly presume to understand and to explain the Infinite?

This truth, however, does not absolve us from studying the Word He gave to us as His people and to apply it to the best of our ability. It is the precious truth of the Father, given as guidance for life to His beloved children. Our reason for studying and our basis for obeying our Father’s commands cannot be because we aim to fully understand them. We believe them to be true, for the One who commands is True. Our faith is in the Giver of the Word even when we see no reason in a particular facet of it. At times the circumstances we face in life are threatening and bewildering and beyond the scope of our understanding. Like a child, we can then place our hand confidently in the hand of our Father and trust Him to lead the way and to bring us safely through.

An intriguing verse in the Psalms reads: “Truth grows from the ground.” Rabbi Mendel of Kotsk, in 18th Century Poland, commented that this teaches us that truth is expressed in “honest behavior here on earth.” [1] He insisted that “religion needed to be rooted in this-worldly decency, rather than lofty flights of fancy.” [2] This is echoed in modern vernacular as, “Don’t be so heavenly minded that you’re no earthly good!” However, with the modern emphasis on scientific, critical analysis, and the dictates of the physical, there is a growing spiritual hunger and an awareness of the need for the ‘supernatural’. The key is found in the middle ground, in a healthy balance of the physical and spiritual, the earth and the heavens. 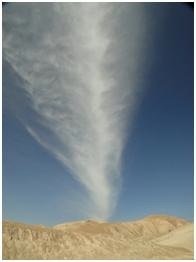 This balance is illustrated in the pattern of the six ‘workdays’ and the day of Sabbath rest. We are able to see God and serve Him in the ordinary, every-day moments of our daily lives and our regular physical activities. On the other hand, we need a set time apart from our weekday routines to devote to the needs of our spirits, our ‘inner man.’ The Creator exemplified this principle when He set apart and “blessed the seventh day” (Genesis 2:3). It is a day to allow the Creator to take precedence over the every-day works of Creation. The weekday work is good and necessary, but the goal is the Shalom and the shlemut, the wholeness, of Shabbat. Similarly, the goal of a well-lived life in this world is the glory of the next – eternal life in the Light of the Presence of our Creator. One is the balance and the meaning of the other.

Wedding pictures of the bride and groom making their vows or walking down the aisle into their new life together are beautiful pictures of trust. Each is placing his or her life into the hands of the other, trusting that it will be valued and safe. So, too, are pictures of a child happily jumping from a height into his father’s arms, fully trusting that he will catch him. Less heartwarming situations of trust occur when you open your mouth in a dentist’s chair, or board an airplane, or eat a meal in a restaurant. There are innumerable settings in which we need to believe that those providing a service or doing their jobs are trustworthy. Unfortunately, as one journeys through life, one’s trust can be dented and sometimes shattered altogether and one is inclined to agree with the credo, “In God we trust, all others are suspect!”

The element of trust is significant in all forms of interaction. Sincere, willing, and loving obedience can only be extended to one in whom we fully trust. In the Kingdom of God, the foundation upon which our faith is built is total trust in our King. When God met with His people Israel at Mount Sinai and presented the ‘company rules,’ as it were, their response was Na’asseh ve’nishma! “We will do and we will obey!” (Exodus 24:7). So great was their faith in their Redeemer that they could pledge their allegiance to Him before they knew what would be required of them as His subjects. They could commit themselves to obey His commands, not based on logic or understanding, but because it was the One true God who commanded.

It is worth noting that many commandments prescribed in the Torah pertain to the Land itself and can only be followed when one is living in Israel. These instructions on how to live in the Land were a preparation as well as an assurance to the Israelites at Sinai that they would eventually reach the Promised Land. They also are significant now that God has restored His people to the Land of Israel in modern times. An interesting and challenging command is that of Shemittah, the Sabbatical Year, which states that when the people of Israel are in the Land of Promise the soil must be left to lie fallow every seventh year (Exodus 23:10-11). There should be no plowing, sowing, or working of the land; it must rest. Those who have faith and trust in the God of Israel are endeavoring to live in obedience to His commandments regarding the land. Interestingly, records show that those farmers who are implementing the rule of shemittah on their farms enjoy bumper crops in the sixth year, enough to sustain them through the harvest of the eighth year. If we consider the commandment of a Sabbatical year for the land, we can appreciate the benefits to the soil in replenishing itself as it lies fallow for a year. The true benefit, however, accrues to the farmer himself. He has a Sabbatical. Farming is a very demanding, “twenty-four seven” occupation. In laying down the land for a year he is, in effect, acknowledging that the land is not his but God’s. He is reminded that the true Provider of his needs is his Father in heaven. God is in control and we are His loving and trusting servants.

Again, in accord with the Sabbath day, the Sabbatical year is a reminder of what is of major importance and of true significance in life. As the peace and respite of the seventh day of Shabbat is enjoyed every week, time is afforded during the Sabbatical year to focus one’s full attention on the Creator Himself; to study His Word, to draw closer to Him and to solidify the foundations of our relationship with Him. We are able to clarify His purposes for our life in the weeks and years ahead and can go forward remembering that our true calling and mission are in the service of God.

As we serve our Father and King, may we be encouraged in accord with Paul’s words to Timothy,