“Blessed is God, who distinguishes between the sacred and profane,
between light and darkness, between Israel and the nations.”
(Kiddush blessing)

The Hebrew word havdalah means to differentiate, or to distinguish one thing from another. A word from the same root is hevdel, difference. The ability to distinguish is a valuable gift; a tool that the rush of the modern world can easily dull. In our busy-ness and distraction, days tend to run into one another; life becomes a blur and we become blind to the uniqueness of each day as well as the special ‘set apart’ days. We can lose sight of the inherent beauty and the meaning of things around us and begin to take them for granted. The challenge presented to us, as spiritual beings, is to focus, to be aware and to notice the God-ordained differences – to differentiate – and thereby to learn from them, to appreciate their meaning and to take pleasure in them. This does not happen automatically; it requires our conscious intent and participation.

The Hebraic observance of Havdalah marks the end of Shabbat, and takes place in the evening at a time when three stars appear in the sky. It tells us that we are now leaving the special set apart time and entering the regular week, and that there is a difference. The question arises: “Why should believers in Yeshua take notice of this little ceremony?” To attempt an answer, let us consider the first Messianic congregation in Jerusalem. There were thousands in Israel who followed Yeshua when He lived and taught and more so after His resurrection and the outpouring of the Holy Spirit at Pentecost.
We read in the book of Acts, for example: “And the word of God increased; and the number of the disciples multiplied greatly in Jerusalem, and a great many of the priests were obedient to the faith” (6:7).

It was a dynamic, intense encounter of faith in the God of Israel that spread to all areas of the Diaspora [places in the then known world where Jews were living as a result of the exile from the Land of Israel]. At that time there was no synagogue-church split and all believers participated in synagogue worship services. They already were, or else became, active members of the local Jewish community. We can surmise that there was much interaction within the community and that the families who were followers of Yeshua would have included rituals to illustrate their experience in Messiah in the context of the existing God-inspired Feast celebrations. These may well have become “seeds” embedded in the wider traditional liturgy and ritual and which point toward future revelations of Messiah Yeshua. Havdalah may well be one of these seeds. Out of interest, let us consider the story of Eutychus, in Acts 20:7-11.

“On the first day of the week, [As the day starts after sunset, the ‘first day’ of the week starts after Shabbat ends – Motzei Shabbat – the time of Havdalah] when we were gathered together to eat, Paul talked with them, intending to depart on the morrow; and he prolonged his speech until midnight. There were many lights in the upper chamber where we were gathered.”

Although the service of Havdalah was only instituted officially by the scribes of the Great Assembly in Jerusalem around the 4th Century, we may discern that this post-Shabbat gathering was a very important and meaningful time of meeting for the early Messianic believers. This was the time of Yeshua’s resurrection, and the longing for “the Light of the world that ushers in the Day that is all Shabbat,” which is at the heart of Havdalah, can be clearly associated with Him. As we explore the traditional ceremony of Havdalah, we find clear pointers to Messiah that would have been celebrated joyfully by the early followers of Yeshua; and which, likewise, are significant today.

The Sabbath is welcomed with the lighting of candles and it is ushered out with the lighting of a special, braided, multi-wicked candle. Women enjoy the honor of ushering in the Sabbath, often referred to as a Queen, with its atmosphere that epitomizes the feminine aspects of life – receptivity, love of beauty and harmony, and the tendency to cultivate and nurture God given potential. The man of the household, where relevant, performs the Havdalah ceremony at the conclusion of the Sabbath, and ushers in the new week with its more masculine energy and the constructive drive of regular weekday activities.

The central element of Havdalah is the candle (ner). It has six wicks woven into one, which represents the intent to carry the light of Shabbat into the six workdays ahead. The other two elements are wine, or grape juice, and spices. All one’s senses are involved during the short ceremony. Sight (candlelight), hearing (prayers and song), taste (wine), smell (spices) and touch (as the spice box is passed around to everyone present).

The wine (yayin) is poured until the cup overflows. This is a symbol of our joy and blessing in YHWH, which has been filled during Shabbat and which we trust will flow over into the week ahead. 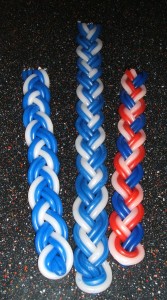 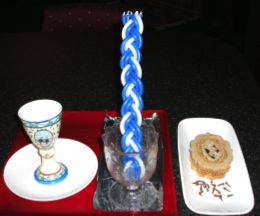 A ‘home made’ havdalah set. On red tray: A Kiddush cup on a saucer and a candle in glass on foil. Alongside, a perforated ornamental box with cloves

The spices (besamim) emit a sweet fragrance, reminiscent of the fragrance of Shabbat, which we also desire to carry forward with us into the week ahead. Enfolded in Shabbat is the promise and the hope of Messiah’s arrival to reign over all the earth as King of kings. The setting of the sun on Shabbat indicates that that time has not yet come and with this realization comes a measure of sadness. The spices serve the purpose of reviving our spirit and restoring our joy.

One can be very creative in fashioning a personal spice container, however a great variety are available for purchase. A unique, traditional spice box is one made of silver in the shape of a miniature castle, complete with turret, flag, and sometimes bells, and a castle door. The beautifully crafted design, shown below, illustrates the fact that even as we bid farewell to the Sabbath Queen we anticipate the arrival of the King! 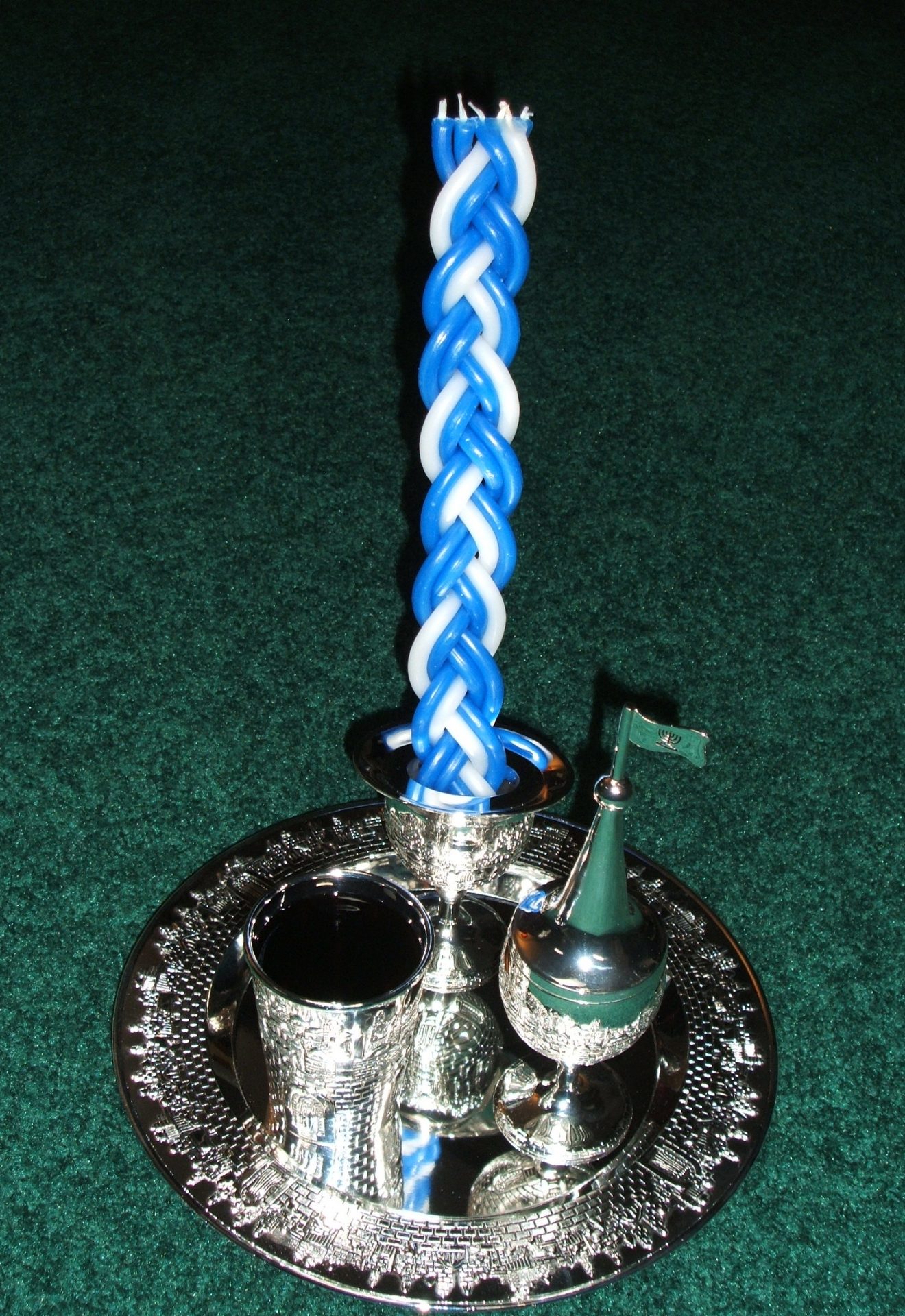 Spices, in Yeshua’s time, were a symbol of royalty. Kings of Israel were anointed with special spices and the fragrance would inform people of their presence. For example, the arrival of King Solomon from the desert is described in the Song of Songs, “…like a column of smoke, perfumed with myrrh and frankincense” (3:6).

The God-designed incense, offered on the altar of incense in the Holy Place of the Temple, filled the air of Jerusalem with its unique fragrance, and set it apart as the royal, capital City of the Great King.

In general, after Havdalah, people resume their regular weekday activities. However, certain Orthodox Jewish groups prolong the joy of Shabbat with a celebration called Melaveh Malka or “Escorting the Queen.” It is considered an extended ushering out of the Sabbath, which is seen as a Queen or a Bride to whom one gave a special welcome and it is appropriate to give her a fitting farewell. A gathering is held that includes singing, dancing, praising, and the enjoyment of refreshments. All rejoice as if eternal Life in His Presence had already begun. Is that not what the disciples were celebrating in Messiah?

Interestingly, Melaveh Malka also is known by the Aramaic name: Seudah De’David Malkesa – the Banquet of King David, who is a type of the King Messiah – Mashiach ben David.

The Havdalah symbols also indicate the coronation of King Messiah.

Indeed, at Havdalah we are reminded that even now we can celebrate Heaven on Earth in the Risen Messiah, who soon is coming again in glory to reign as the King of kings in His Father’s Kingdom on earth.