Thank you God for making me a woman 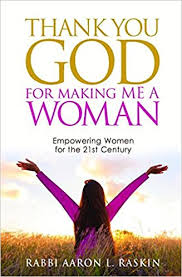 Women who have the ability to emulate G-d by bringing children into the world and wear multiple hats on any given day are truly unique and beyond measure.

A woman is her husbands’ confidante, the mother of their children, the family psychiatrist, the family doctor, interior decorator, educational director, chef and so on…

Women have so many responsibilities, they emulate G-d more than men in this regard, and are not counted; they are one and unique and truly beyond the limitations of numbers.
~ Rabbi Aaron L. Raskin

THANK YOU GOD
FOR MAKING ME A WOMAN
by Rabbi Aaron L. Raskin

~ review by Cindy ( and endorsed by Keren)

Recently I ran across a very troubling one-sided video that shared Rabbinic quotes about women, negative quotes that were often taken out of context. As presented, there was an implication that these negative teachings were standard in Judaism and shared by the majority of Rabbis. What the creators of the video failed to convey is that there are various and diverse views and midrashim on the perception of women – some good, some bad. Unlike any Christian commentary I’ve read, the Talmud is extremely varigated and includes numerous views on every issue imaginable. In typical Hebraic thinking, it does not always present a cut-and-dried, ‘politically correct’ and acceptable-to-all view. The Talmud presents all sides of any particular subject or argument. It is expected that the reader will question and examine the issue at hand him/herself.

Though this review on Rabbi Raskin’s book in no way ignores the religious chauvinism and discrimination against women that exists in many societies today, we are honest enough to understand that this discrimination is held by some leaders and members among all faiths. This review is being shared with the hopes of balancing out the scales and welcoming honest discussion.

One time, the Rebbe Rashab and Rav Yitzchok met with a certain Christian minister to convince him to rescind a certain anti-Semitic decree. In the course of their discussion, the minister said, “We have the right to persecute you Jews. You despise us, and you say it so clearly every day in your morning prayers! Take a look at your prayer book. Every morning you say, ‘Blessed are you G-d…Who has not made me a gentile.’ You Jews hate us!”

Without hesitating a moment Rav Yitzchok replied, “Honored Minister, do you love your wife?” “Do I love my wife?!? I love her more than anything else. I would do anything for her!”

“We also love our wives,” said Rav Yitzchok. “Yet, right after the blessing you just quoted, we say an additional blessing, ‘Blessed are you G-d…for not making me a woman.’ What is the meaning of this blessing?”

Seeing that he had attracted the minister’s curiosity, he continued. “A woman carries a child for nine months, has labor and birthing pains, then the responsibility of raising children in addition to running her household. This requires a great amount of strength, endurance and patience, things most men lack. So we thank G-d for not giving us the responsibility of a woman.

“The same is true regarding gentiles.” Rav Yitzchok concluded, “Every person, Jew or gentile, must serve his Creator. We, however, have it easy. G-d gave us 613 laws that tell us exactly what to do. A gentile was only given seven laws, and he has to figure out the rest on his own. We thank G-d for making our job easier.”

Surprised by Rav Yitzchok’s swift, novel response, the minister burst out laughing. He turned to the Rebbe Rashab. “You’re lucky you have such a clever person with you. I am retracting my decree.”

Rabbi Aaron L. Raskin’s approach, as he informs us in the book’s preface, is based primarily on the teaching of his illustrious teacher and mentor: the Lubavitcher Rebbe, Rabbi Menachem Mendel Schneerson. Rabbi Raskin shares that the Rebbe had three monumental teachings:

Every word of Rabbi Raskin’s in Thank You God For Making Me A Woman, is based upon the absolute premise that according to Torah, men and women have always been equal and often in Judaic understanding there are areas where women are held superior.

Rabbi Raskin points out that many of the laws concerning prayer, and particularly from the daily Amidah prayer, are derived from the prayer of Chana (Hannah). In addition, that in traditional Judaism a woman’s testimony carries more weight than two men; that women have been endowed with the sacred ability to reveal the G-dliness that is concealed here in the world, and to reveal the potential of all human kind, and that women are born with a greater binah (understanding, intelligence and intuition) than men. Over and over again Rabbi Raskin touches on the fact that in Judaism women are considered not only equal to men but are often endowed with greater spiritual qualities.

Written with the highest respect and great sensitivity, Rabbi Raskin wraps up each chapter with a heartwarming story that illustrates the spirit of what was shared in the preceding pages.

As a woman (and as a branch cut from a wild olive tree and grafted into the olive tree of Israel) I received every word the Rabbi wrote as stemming from his absolute belief that “the potential and capabilities of every man, woman, or child, Jew and gentile alike…were created equal, and with their own distinct, respected role in the world.”

Every human being has as specific role and design that contributes to the grand picture of creation.

As it should be with any excellent book, Thank You God For Making Me A Woman lends itself to honest dialogue and open discussion, never belittling, insulting, or diminishing any person. If you are interested in the layers of meaning behind the birkhot ha-shahar (morning blessings); the job given to women of lighting the Shabbat candles; baking the challah; the mikvah… Rabbi Raskin writes in a way that is not only simple to understand but very engaging!

If you are looking for a good study on Biblical womanhood from a Hebraic perspective consider Dr. John Garr’s 3 volume series Feminine and Free also available from Amazon.com –
God and Women: Woman in God’s Image and Likeness

Coequal and Counterbalanced: God’s Blueprint for Women and Men

Feminine by Design: The God-Fashioned Woman

Listen to Rabbi Aaron L. Raskin tell the story behind the writing of his book Thank God For Making Me a Woman: