As an historian of antisemitism looks back over the millennia of horrors he has recorded, an inescapable conclusion emerges: Antisemitism is the longest and deepest hate of human history. [1]   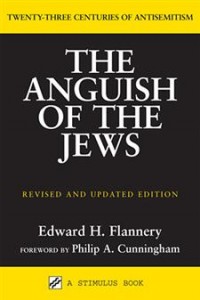 THE ANGUISH OF THE JEWS
Twenty-Three Centuries Of Antisemitism

The tragic story this book has unfolded ends  in the deepest chambers of the spirit.
For the Christian reader–for whom it was especially written–it is a tragedy in which Jesus participates, crucified again in the person of His people at the hand of many baptized in His name.
The sin of anti-Semitism contains many sins, but in the end it is a denial of Christian faith, a failure of Christian hope, and a malady of Christian love.   And was not this Christianity’s supreme defection: that the Christian people to whom persecution was promised by its Master (John 16:2-4) was not the most persecuted people in Christendom, but rather was it the people from whom He came?   And the ultimate scandal: that in carrying the burden of God in history the Jewish people did not find in the Christian churches an ally and defender but one of their most zealous detractors and oppressors?
It is a story that calls for repentance. [1]

A heartrending read covering the history of anti-Semitism from ancient to modern times. Written by a Catholic priest, the author does not hide the ugly truth that the Church has been one of the main persecutors of the Jewish people.

A century by century, country by country account of atrocities committed against the Jewish people. A truly sad history that calls for repentance and must never be forgotten.

Let the glory of God be extolled, and God’s great Name be hallowed in the world whose creation God willed. May God rule in our own day, in our own lives,
and in the life of all Israel. Let God’s great name be blessed for ever and ever.
Beyond all the praises, songs, and adorations that we can utter is the Holy One, the Blessed One, whom yet we glorify, honor, and exalt.
For us and for all Israel, may the blessing of peace and the promise of life be fulfilled.
May the One who causes peace to reign in the high heavens let peace descend on us,
on all Israel, and all the world.
Amen.

– from the  Kaddish prayer