We are launching our Reflect & Discuss section with the somewhat humourous but, on the other hand, carrying deeper significance, question of:

“Which came first, the Chicken or the Egg? 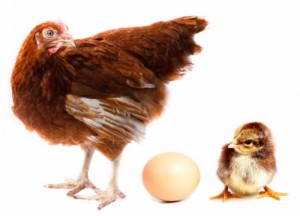 This conundrum is addressed in an article by Simon Brown, who posits:

That’s true… so what do you think?

Leave a Reply  in box below. Thanks.