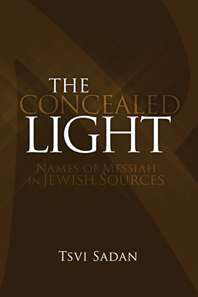 As the Festival of Lights draws near, I want to share with you a book that I will be rereading during this special season.

The Concealed Light – Names of Messiah in Jewish Sources* introduces us to more than 100 names of Messiah. Alphabetized, according to the Hebrew Alef-Bet, each name has a short, deeply rich midrash that leaves you pondering long after your initial read.

Though you may be familiar with some of the names — Stone, Light, Lion, Lamb, Branch… — there are many more less familiar — Fear, Dove, Orphan, Morning without Clouds, Vulture, Donkey, Vav…

Just a glimpse into The Concealed Light:

That Messiah is called Glorious (kavod) is no small thing, since Jewish in thought, glory is one of the attributes of God. in the language of theologians, Jews see glory as a divine attribute. One can see why this is so from verses such as, “And the glory of the Lord appeared to them” (Numbers 20:6). Accordingly, what appeared before the people of Israel was no mere cloud, but rather Glory personified [given substance].

Orphan
The name Orphan (yatom) for Messiah appears in ‘Yeshu’ot Meshicho’ (The Salvations of His Messiah), a book written in 1498 by Rabbi Isaac Abravanel. Abravanel, advisor to the king of Spain, was expelled with the rest of the Jews from Spain in 1492. The event created despair and caused many to become vulnerable to the immense pressure to convert. The book’s purpose, accordingly, was to renew hope in the coming Messiah.

To enhance the significance of the Orphan Messiah, Abravanel brings the argument of a converted Jew who quotes a Jewish source to prove that Messiah has no father, i.e., he is an orphan, and the convert says, “‘We have become orphans without a father’ (Lamentations 5:3 NAS). … God said to Israel: ‘You have said to me, “We have become orphans without a father”; therefore the redeemer I will bring from among you has no father, for it is said … “Today I have begotten You””’ (Psalm 2:7). The convert “concluded from this that their Messiah … has no human father” (Sefer Yeshu’ot Meshicho).

Tsvi Sadan reveals Yeshua throughout the Tanakh and unveils to us not only as He was, as He is, but also as He will be.

A wonderful read for any season. Refreshing, easy to read, but one that is to be deeply pondered. The Concealed Light is available through First Fruits of Zion.

* Some of the Jewish Sources in which Tsvi Sadan digs deep are The Talmud, Midrash Rabbah, Zohar, Sifrei, and other less know resources — many of which are only available in Hebrew. 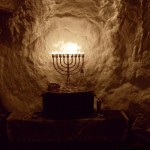 My read for Hanukkah last year, which was very special as it was my first Hanukkah after returning home to Jerusalem, was The Soul of Chanukah – Teachings of Rabbi Shlomo Carlebach, compiled by Rabbi Shlomo Katz. Carlebach and Katz are both known for their gift of music. Many Carlebach songs are even sung in Christian congregations. You’d be surprised!

I took it from the shelf this morning, thinking to revisit it this year, and opened it randomly only to read, in Chapter 2 – Shining Souls, the sentence, “The light of Chanukah is the Ohr HaGanuz, the Concealed Light”! This was more than coincidence after reading Cindy’s review last night. Although, Hanukkah is a time of miracles.

A prayer said after the hanukkiah candle lighting blessings is: Ve’ein lanu reishut le’hishtamesh bahem. ‘We are not permitted to use their light for anything’ – only to behold their beauty. The fullness of the lights of Hanukkah is…as Shlomo Carlebach describes, “…completely beyond me. For a few minutes G-d shows me this great light. But not for too long. I can’t handle it.” Why? “This isn’t normal light.” It’s not light we use for normal, everyday things. Their light reminds us to remember and to deeply reflect upon the Source of Light.

“Who was the frst one to kindle a great light in the world? The Holy One, blessed is He.” G-d said, “Let there be light.” And there was light. Our souls long for “…that one light that G-d lit when He created the world. This is the light of Chanukah. …Most of the year, the light is not the full light G-d intended for us to have. We weren’t ready for it, so G-d hid the light. Once a year, for eight days, we get a taste of it, for just a few minutes each night.”

At Hanukkah, we draw close in a unique way to the Source of Light, to the Source of everything beautiful in the world, to the One who is Light…through the Concealed Light of Messiah. May His light shine brightly and be revealed more fully in and through our lives this year, that more and more may come to see. 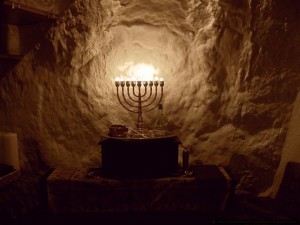