May it be Your will, O Lord, our God and the God of our forefathers, that You inaugurate this month of Av upon us for goodness and for blessing. May You give us long life, 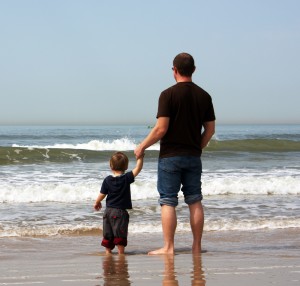 There are a number of interesting and paradoxical details to note regarding the Hebrew month of Av.
1. The name of the month literally means ‘a father’. We see an example in Psalm 103:13, K’rachem av al banim… “As a father is merciful to his children, so has YHVH shown mercy to those who fear Him.” We can rest securely, knowing that our lives are in the hands of a loving, all-knowing and faithful Father.

2. On the other hand,the 9th of Av –Tisha b’Av (26th July, 2015) is a day of deep mourning and fasting, which marks the destruction of both the First and Second Temples as well as the tragic exile of the majority of God’s people from the Land. Tisha b’Av also commemorates the many persecutions and pogroms, Crusades and Inquisitions perpetrated against the Jews throughout the centuries that followed.

It is only due to our Father’s great mercy that the Jewish people have endured and survived much torment and persecution in foreign lands. In recent generations, God’s people have heard the sound of His great trumpet, shofar, calling them back to His Land where they belong.

Tisha b’Av, however, still is observed with mourning and fasting because the full Redemption has not yet come and Israel continues to suffer unrelenting and egregious attacks from the enemy. Nonetheless, the hope has been fulfilled and in that we rejoice. Through all the long years of exile, at the conclusion of every Passover Seder the prayer of hope has been proclaimed: Le’Shana ha’ba’ah b’Yerushalayim! “Next year in Jerusalem!” What added joy we experience when we now can say in Israel, “This year in Jerusalem!”

3. Although the first half of the month is marked with sadness, the second half is brightened with joy. The fifteenth of Av – Tu b’Av – was celebrated as a joyous festival hundreds of years before the First Temple was built.

An account in the book of Judges relates how certain men of the tribe of Benjamin had committed acts of rape and murder against members of the other tribes. In response, the tribes gathered together and attacked and destroyed the small tribe of Benjamin. Only 600 men escaped the battle and fled to the cliffs of Rimmon, which are situated northeast of Jerusalem. Later the tribes repented of the severity of their action and they made peace with the Benjaminites.

Realizing that the men now needed to find wives in order to build up the tribe once again, they advised them to go to Shiloh, where the Tabernacle with the Ark of the Covenant was housed, to attend the celebration of an annual agricultural feast. They advised, “Go and hide in the vineyards and watch; if the daughters of Shiloh come out to dance in the dances, then come out of the vineyards and seize each man his wife from the daughters of Shiloh, and return to the land of Benjamin (Judges 21:20-21).

It was the celebration of Tu b’Av, a grape harvest, and the time the white squill blooms all over Israel. The tall tapered stems, covered with small white flowers, stand out brightly against the yellow and brown fields at the end of a long, hot summer. They are a clear season marker, for Tu b’Av signals the summer solstice and there is a subtle change as the days begin to shorten and clouds start to appear in the sky, announcing the approaching rains of winter.** 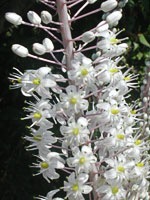 The virgin maidens, to reflect the blossoming white squills, would don white dresses and dance in the vineyards of Shiloh, and wedding matches were made.

4. The actual date of death of only one person is recorded in the Torah, that of Aaron, the brother of Moses. We read that forty years after the Israelites left Egypt, the Lord called Aaron to Mount Hor and he died there “…in the fifth month on the first of the month” (Numbers 33:38) – the first of Av. Aaron, the High Priest, was deeply loved by the people and this was an occasion of deep mourning. The sadness of the High Priest’s death in the same month seems fused with the mourning of the destruction of the Temples.

In keeping with the initial sadness of the month is the fact that the tribe of Shimon (Simeon), associated with Av, is the only tribe that was not blessed by Jacob on his deathbed, nor later by Moses. Jacob denounces both Shimon and Levi for their rage and murderous attack on the town of Shechem to avenge the rape of their sister Dinah (Genesis 49:5-7). Levi was redeemed and blessed by Moses, but Shimon forfeited this blessing due to the tribe’s flagrant immoral conduct with the foreign women at Shittim (Numbers 25:1-6, 17). Later, once established in the Land, this behavior also cost the tribe the privilege of ever having a judge of Israel appointed from their ranks.*** 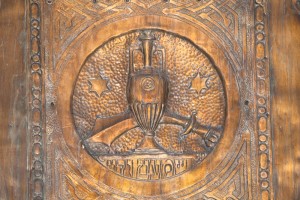 The tribal symbol represents Shimon and Levi, two ‘stars’ or ‘shields’ in Israel. The one carried a weapon for defense and the other a vessel of service to the God of Israel.

Ironically, in Jewish commentary it is considered that all Shimon’s deeds were motivated by a standard of overly strict justice. He judged others and easily found them guilty. It is considered that it was he who “sentenced” his brother Joseph and threw him in the pit (Genesis 37:19-20). This is highlighted when the brothers first appear before Joseph, now Viceroy of Egypt and Shimon is the only one he keeps behind as a hostage. Also, in judging Shechem guilty, Shimon instigated the retaliation and attack in angry vengeance. Although he may have had a keen sense of justice, it is this trait of anger that precludes Shimon and his tribe from producing a true judge in Israel.

Anger will always distort any fair and balanced judgment. Anger also prevents a person from truly rejoicing in one’s service and worship of the Lord, and eventually can cause one to become isolated from other people. Justice, to be true, must be tempered with mercy and weighed from a basis of trust and joy in the Lord. We can therefore appreciate the wisdom of Jacob when he cannot bless the judgmental anger of this tribe and he says: “I will separate them within Jacob, and I will disperse them in Israel” (Genesis 49:7). Their hope lay in mingling with the other tribes in order that their anger might be diffused and they might learn to interact with others in peace and to serve the Lord with joy.

Av celebrates the constant truth of new life in the One who is the Source of all life.

The month of Av ultimately represents the balance of elements we deal with constantly on our journey through life – sadness and joy, justice and mercy, anger and grace, discord and unity, what is hidden and what is revealed. Undergirding it all is the knowledge that our Father, in His abundant love and mercy towards us, is in control and He is preparing the way before us. Only when the physical and the spiritual elements of life are in balance and yielded to the Lord can there be true victory and peace.

Interestingly, in some rabbinic literature Tisha b’Av, the day of great mourning, is the date reckoned to be the birth date of the Messiah – the Savior-King who brings new life. We can indeed rejoice in the Lamb who is our Shepherd and who guides us to the “springs of living water” that bring mercy, grace, hope and truth and Joy in the Presence of God.

For the Lamb in the midst of the throne will be their shepherd, and he will guide them to springs of living water,
and God will wipe away every tear from their eyes.(Revelation 7:17).