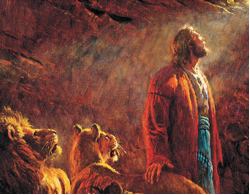 May it be Your will, O Lord, our God and the God of our forefathers, that You inaugurate this month of Nissan upon us for goodness and for blessing. 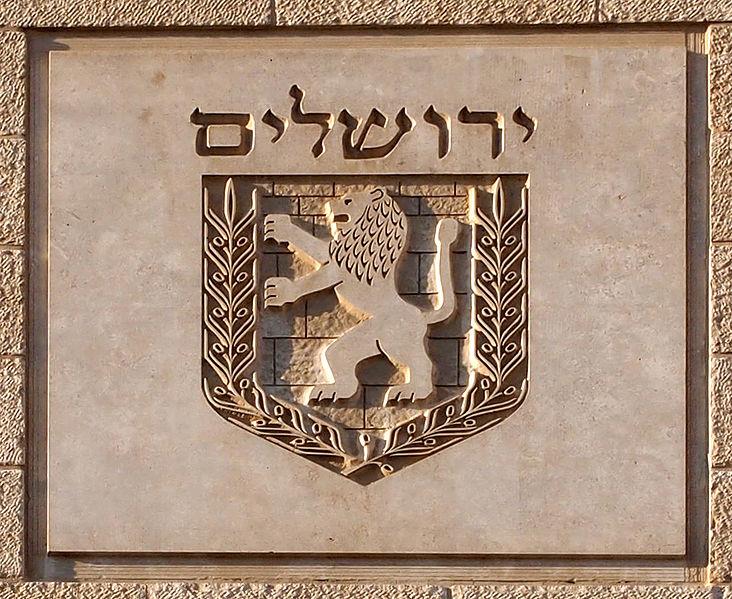 The symbol and standard of Jerusalem – Yerushalaim.

The present names of the Hebrew months have their origin from the time of the exile of the Jews to Babylonia and Persia, where the science of astronomy flourished. Originally, in the Scriptures, the months are  numbered; e.g., the first month, the second month. Some have names according to the season, Nissan, for example, was called Aviv / Spring because it was the month that heralded the end of Winter and the beginning of the new life of the Spring season. The Babylonian-Persian names also can be found in later books of the Bible, such as the book of Esther.

This ‘first month’, Nissan or Aviv, was established by God at the Exodus from Egypt:
“This month shall be for you the first of the months” (Exodus 12:2).
It was a new day for the slaves who stood on the threshold of freedom. Now their days, as the chosen people of the King of the Universe, would be counted. Nissan, with the festival of Passover on the fifteenth of the month, always signals the season of new beginnings, the time of rebirth and new life. As it is the first, or “king”, of the months, the kings of Israel were inaugurated on Rosh Chodesh Nissan and the years of their kingship were measured by this date.

“In the order of encampments, [Nissan] corresponds to the tribe of Yehudah, from whom ‘the stump of Jewish royalty’ will emerge.”*

The symbol on the standard of the tribe of Judah, as they led the formation of the tribes of Israel through the wilderness, was the lion – the “king” of the animal world.

When Jacob blessed his sons before his death, he proclaimed to Judah: “Yehudah, you, your brothers shall acknowledge!” (Genesis 49:8). The translation Onkelos suggests that Yehudah would be acclaimed by all his brothers due to the honesty and courage he evidenced in the issue with his daughter-in-law, Tamar. He immediately and openly acknowledged his guilt and said, “She is more righteous than I…” (Genesis 38). His admission saved her life. This same regard for innocent life is illustrated when Judah wisely advises his brothers not to take Joseph’s life after they had thrown him in the pit (Genesis 36:26-27). The Midrash notes the interesting fact that all his brothers would eventually be called by Yehudah’s name. “No one would introduce himself as a Reuvenite or a Shimonite – they would all refer to themselves as Yehudim.”2

Indeed, we see in the book of Esther that Mordechai, although he was of the tribe of Benjamin, is described as a Yehudi. “Now there was a Jew (Yehudi) in Susa the capital whose name was Mordechai, …a Benjaminite” (Esther 2:5). Also, the enemy “Haman sought to destroy all the Jews (Yehudim), the people of Mordechai, throughout the whole kingdom…” (3:6).

This phenomenon appears to be a result of the exile, which, despite the tragedy of dispersion, served to unite the tribes as one people – named, as Jacob had prophesied, in honor of their brother Yehudah.

We also find evidence of this categorization in the book of Daniel, when “…certain Chaldeans came forward and maliciously accused the Jews (Yehudim) …to King Nebuchadnezzar” (3:8-9). Their charge being: “There are certain Jews whom you have appointed over the affairs of the province of Babylon: Shadrach, Meshach, and Abednego. These men, O king, pay no heed to you; they do not serve your gods or worship the golden image which you have set up” (3:12). As was the case with Mordechai, the factor that separates the Yehudim from the people of the nations is that they reject the worship of idols.

Shadrach, Meshach and Abednego chose, in their faithfulness, to face the flames of the most intense furnace and Daniel chose to be thrown into a den of hungry lions rather than bow to a foreign idol – and the Messiah of the tribe of Yehudah met them there and preserved them!  It is no surprise, therefore, that the God of Israel chose to place His Name and to build the Temple, the House of His Holy Presence, the Beit HaMikdash, in the portion of the Promised Land allocated to the tribe of Judah. There, in His Holy city,  stands the Holy Mount where Abraham bound Isaac to the altar and God provided the ram; the place where Yeshua said, “Abraham saw my day and was glad,” and where he lay down his life in faithful obedience – in Jerusalem, the City of King David, and the City of the Great King who will reign there forever.

When King Solomon built and dedicated the Temple, God promised:

Now my eyes will be open and my ears attentive to the prayer that is made in this place. For now I have chosen and consecrated this House that My Name may be there forever; My eyes and My heart will be there for all time.
(2 Chronicles 7:14-16) 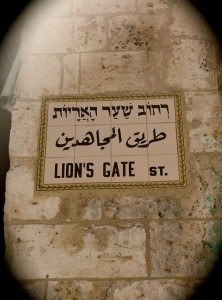 Pic: Sign on the street leading from the Lion’s Gate, in the walls of the Old City, through which the IDF entered to liberate and regain Jerusalem in 1967.