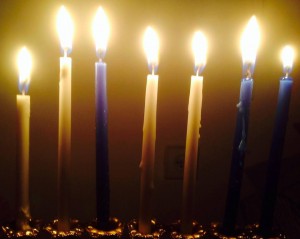 KISLEV – The ‘dark’ month that is one of the brightest!

May it be Your will, O Lord, our God and the God of our forefathers, that You inaugurate this month of Kislev upon us for goodness and for blessing.

In Israel and the northern hemisphere, the month of Kislev falls during the final days of Autumn. The surroundings are vibrant with the reds and golds of the season, but the days are shorter and the hours of darkness lengthen. The cold of Winter is beginning to set in. The historical festival of Hanukkah is celebrated at this time of the year, always on 25th Kislev, and it’s flickering lights invite us into this sacred space of warmth and holiness.

“When Adam and Eve first saw the sun go down they were panic-stricken, thinking that the setting of the sun was a consequence of their sin, and that this new, intense darkness would spell their death. They spent that entire first night weeping, until dawn broke and they realized, to their immense relief, that this was simply the way of the world — day was followed by night, and night was followed by day.”* 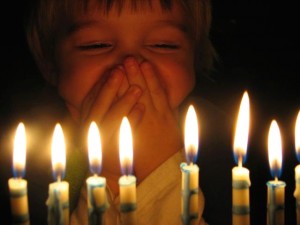 “A human being is created to light up this world.”**

Light is a shining thread woven through the Feasts of the Lord. It is, in truth, a major theme from the very beginning of Creation through the close of Time – from Genesis to Revelation.

“And the city has no need of sun or moon to shine on it, for the glory of God is its light,  and its lamp is the Lamb. The nations will walk by its light, and the kings of the earth will bring their glory into it.” (Revelation 21:23-24).

Hanukkah is celebrated on the 25th day of Kislev every year, and the birth of Messiah Yeshua, as the Light of the world, although this cannot be confirmed textually, is celebrated traditionally by Christians every 25th of December.
We discover an interesting “coincidence” in that the 25th Hebrew word of the Torah is “ohr” – light! This is the first mention of light in the Bible (Genesis 1:3).

In Genesis, God tells Abram, “Now look toward the heavens, and count the stars, if you are able to count them.” And He said to him, “So shall your descendants be.” We see the obvious fact that Abraham’s descendants will be too numerous to count but Hassidic sage, R. Yehudah Leib Alter, gives an interesting midrash on this promise. He imaginatively suggests to look at God’s promise as qualitative, not quantitative. Abraham’s descendants should be like stars in the vast darkness of the night sky ..and light up the darkness of the most depraved and immoral parts of the world. Do the impossible by His Spirit (Zech. 4:6).

Kislev and the Tribe of Benjamin.

“According to the order of the encampments [of the tribes of Israel around the Tabernacle in the wilderness], Tishrei corresponds to Ephraim, Cheshvan to Menashe [Manasseh] and Kislev to Binyamin [Benjamin]…”

There is a special connection between the tribes of Benjamin, Judah and Levi in that they are each associated with the Beit HaMikdash, the Holy Temple in Jerusalem. The reference ‘hidden’ in the gospels that tells us that Yeshua celebrated the festival of Hanukkah places him in the Temple and there is a hint of his Messiahship.

At that time the Feast of Dedication [Hanukkah] took place at Jerusalem.
It was winter, and Jesus was walking in the temple, in the colonnade of Solomon. So the Jews gathered around him and said to him, “How long will you keep us in suspense? If you are the Messiah, tell us plainly.” (John 10:22-24)

Rabbi Samson Raphael Hirsch, in his commentary The Pentateuch, writes that Benjamin merited having the Temple stand in his allocated portion of the Land for three reasons:

These factors establish that Benjamin reflected the characteristics represented by the House of God itself. His Holy Temple was only built in the Land of Israel. It was intended to be a symbol of God’s Presence – a place of His Divine Love that united His people as family in their love for Him and for one another. This love is expressed in the honoring of parents and in caring for the elderly and the weak and needy.

The Temple was also partially situated on a strip of land in Judah’s territory. Judah, after all, had inherited the kingship of the Davidic dynasty, and from his line would come the King of kings, Messiah, who at the end of days will reign from that very place. The Levites and kohanim (priests) were included with Judah as they performed the worship and services in the Temple (Genesis 49:27).

This month of Kislev, with its glowing Festival of Lights, Hanukkah, epitomizes dedication, wholehearted commitment, and devotion to God to the point of laying down one’s life for His Name’s sake, as did Messiah, Yeshua, and the Maccabees of old, and martyrs through the ages to this present day. It is a perfect time to dedicate our lives afresh to our God and His Word, and to allow His Light to shine more brightly through our lives to bring hope to those in darkness around us.