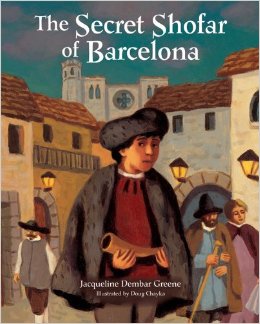 The Secret Shofar Of Barcelona takes place in Spain during the late 1400’s and early 1500’s. This was a time of intense Antisemitism and severe persecution of the Jews by the Roman Catholic Church. It is known historically as the Spanish Inquisition. Thousands of Jews were murdered. Further thousands managed to survive by fleeing to other lands. Still, large numbers remained in Spain and, to save their lives, converted to the Catholic faith. These converts were known as conversos –  Jews living Catholic lives in public while practicing their true faith – as best they could – in private. These conversos not only had to hide their true faith from the Inquisition but were under constant surveillance and suspicion. Spies were everywhere and the secret Jews lived in constant fear of being discovered.

From this period came a Sephardic legend about one very courageous converso, Don Fernando Aguilar and his son, Raphael. Don Fernando Aguilar was the conductor of the Royal Orchestra of Barcelona. On the eve of Rosh Hashanah, Don Fernando decided to secretly honor the Jewish New Year by presenting a concert that included the blowing of the shofar. Hiding in plain sight, his son Rafael blew the shofar – Tek’iah! Shevarim! Teru’ah! Tek’iah Gedolah! Hundreds of notes in all. The non-Jewish audience were fully appreciative of the performance and sound of this unfamiliar instrument. But to the Jews in the audience, the cry of the shofar meant that they could fulfill the mitzvah of hearing the shofar blown for the first time in years.

Accompanied by rich, warm and opaque paintings, The Secret Shofar of Barcelona is a gentle way to introduce AntiSemitism and the period of the Inquisition to children. 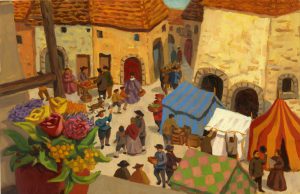 2 thoughts on “THE SECRET SHOFAR OF BARCELONA”