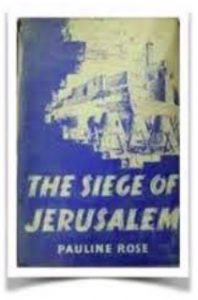 THE SIEGE OF JERUSALEM
Pauline Rose

This book is compiled from notes from my diary and extracts from letters written during my stay in Jerusalem in the summer of 1946, and during the whole war  [War of Independence] period 1948 – 1949.

It does not profess to be a comprehensive survey of the situation in Palestine and I have intentionally not dealt with the political, economic and spiritual problems which contributed to this war.

I have only tried to give a few pictures of life as I experienced it in Jerusalem before, during and after the siege.

As so many distorted pictures have been given to the world concerning the war in Palestine, this book is meant as a contribution to the truth regarding the unique and heroic stand of the Jewish people
in the face of overwhelming odds.

One thought on “THE SIEGE OF JERUSALEM”

Browse The Siege Of Jerusalem

Featuring Top 1/1 of The Siege Of Jerusalem