The Trial of God – by Elie Wiesel 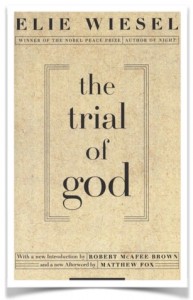 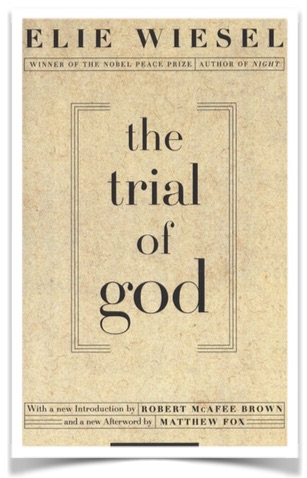 the trial of god
Elie Wiesel

Men and women are being beaten, tortured, and killed – how can one not be afraid of God? True, they are victims of men. But the killers kill in God’s name. Not all? True, but numbers are unimportant. Let one killer kill for God’s glory, and God is guilty. Every person who suffers or causes suffering, every woman who is raped, every child who is tormented implicates Him. What, you need more? A hundred or a thousand? Listen: Either He is responsible or He is not. If He is, let’s judge Him; if He is not, let Him stop judging us. [2]

The trial of god is a Purimshpiel (Purim play) within a Purimshpiel – and is, as Wiesel himself says, “meant as a tragic farce.” The idea for this play came from an event that Elie Wiesel witnessed as a boy in Auschwitz:

Three rabbis – all erudite and pious men – decided one evening to indict God for allowing His children to be massacred. I remember I was there and I felt like crying, but nobody cried. [3]

Taking the story out of the Holocaust, Wiesel re-situates the story into 1648-49 just after the brutal Chmielnicki pogroms and on the eve of Purim. Wiesel’s own words best describe the plot of this story:

What is the story? Three minstrels, three Purim spielers, come to a city called Shamgorod in the Ukraine. It is Purim eve, and they want to perform a play in order to get food and drink.

The innkeeper says, “Are you crazy? Don’t you know where you are? You are in Shamgorod. There was a pogrom here last year. Everyone was killed. I and my daughter are the only Jews here. And you want to perform here?”

They insist on performing and finally he says, “All right. Under one condition – that I will give you the idea. The theme will be a ‘din torah’ with God, a trial of God. I want you to indict God for what he has done to my family, to my community, to all these Jews.”

In the first act the decision is made to hold a trial. In the second act there is a problem; nobody wants to play the role of God’s attorney. In the third act we have the trial itself. [4]

In most of Wiesel books he writes as a witness of the Holocaust. His voice reminds the world of the importance of remembering. This play by Wiesel is no different.

It is impossible not to become emotionally invested in this story. From Berish, the innkeeper who is tied to a table to be a witness to the murder of his family and friends and the repeated violation of his daughter Hanna, to the tortured fragile Hanna, to the bold gutsy Maria, to the priest who is not so much indifferent as ineffective, to the stranger Sam, and the three minstrels, this story forces one to ask the question, “Where am I?”

Wiesel shows us that it is fine to question God, fine to challenge, fine to even be angry. Anger and questions do not necessarily mean a lack of faith nor a crisis of faith, neither are they sacrilegious. In the face of tragedy, and so very much in face of the horrific hell that Wiesel and others experience in Auschwitz and Nazi Germany, it is understandably a part of mans wrestling with God.

What I so deeply love about Wiesel’s writing is not the answers he gives but the questions he raises – questions that have no pat answers, no easy resolution. I will be pondering this read for a good while to come.

You can purchase The Trial of God at amazon.com 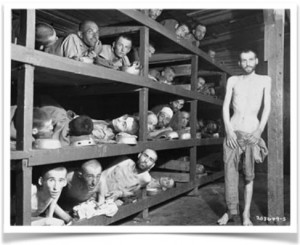 I no longer ask you for either happiness or paradise; all I ask of You is to listen and let me be aware of Your listening.

I no longer ask You to resolve my questions, only to receive them and make them part of You.

I no longer ask You for either rest or wisdom, I only ask You not to close me to gratitude, be it of the most trivial kind, or to surprise and friendship. Love? Love is not Yours to give.

As for my enemies, I do not ask You to punish them or even to enlighten them; I only ask You not to lend them Your mask and Your powers. If You must relinquish one or the other, give them Your powers. But not Your countenance.

They are modest, my requests, and humble.

I ask You what I might ask a stranger met by chance at twilight in a barren land.

I no longer ask You for the life of that child, nor even for his faith. I only beg You to listen to him and act in such a way that You and I can listen to him together.

~ Elie Wiesel, One Generation After, Excerpts From A Diary

1. Elie Wiesel, quoted from a television interview about the trial of god in Andrea Carter and the Family Secret, Susan K. Marlow, pg. 130
2. Elie Wiesel, the trial of god, pg. 54
3. ibid, from the introduction
4. ibid
5. photo credit – Jewish Virtual Library – Weisel is in the second row of the bunks, seventh from the left. 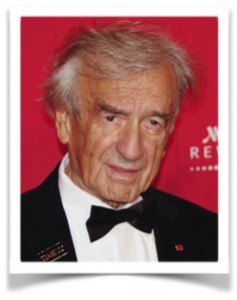 Elie Wiesel is the recipient of the Congressional Medal of Honor and the Nobel Peace Prize, and is Andrew W. Mellon Professor in the Humanities at Boston University.

Listen to the podcast – The Tragedy Of The Believer, an intimate conversation between Elie Wiesel and Krista Tippett.  You can also listen on iTunes