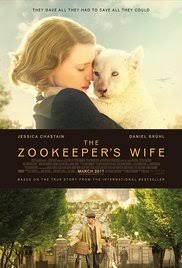 “Why was it,” she asked herself, “that animals can sometimes subdue their predatory ways in only a few months, while humans, despite centuries of refinement, can quickly grow more savage than any beast?”

Incredibly moving, and beautifully filmed, The Zookeepers Wife is based on the true story of Jan and Antonia Żabiński, a husband and wife who were keepers of the Warsaw Zoo.

In September 1939 with the invasion of Germany into Poland, the raining of bombs on Warsaw also rained on the zoo. Many animals were killed. Following the bombing, animals that were considered valuable were transported to a reserve close to Berlin to be cared for and protected. Those deemed not valuable were killed – shot as sport by the Nazi soldiers. Though these scenes are heart wrenching to watch – there is added depth of horror as the parallel between the plight of these animals and the plight of the Jews by the Nazi’s is evident.

Jan and Antonia were part of the Polish underground and sheltered 300+ Jews (all, but  two, of whom survived). Some were hidden, in the empty cages and their basement, for a few days, and others for years. In occupied Poland, when even handing a Jew a drink of water was punishable by death, the courage of Jan and Antonia is even more astounding.

For animal lovers, the tender scenes of interaction between Antonia and the animals warm one’s heart and is a touching witness of chesed (kindness) so needed in todays world.

The musical score is especially moving and the “Mah Nishtanah” coupled with the scenes of the burning of the Warsaw Ghetto on Passover Eve 1943 is particularly memorable.

Powerfully capturing the terror of war-torn Warsaw, the makers of this film were extremely sensitive as the majority of the violence is off-screen. But even offscreen, the brutal rape of a young girl, Ursula, by two Nazi soldiers is hard to bear.

The Zookeepers Wife tells a story of human kindness amidst unimaginable  evil. Highlighting healing, kindness, and compassion, it is a story that the world needs to hear. 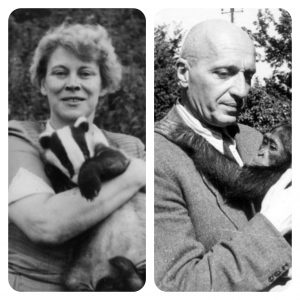 On September 21, 1965, Yad Vashem – the Holocaust Memorial Museum in Jerusalem – recognized Jan Żabiński and his wife, Antonina Żabińska, as Righteous Among the Nations.

To purchase or rent via Amazon Videos you can click here: The Zookeeper’s Wife