VIOLINS OF HOPE – Violins of the Holocaust 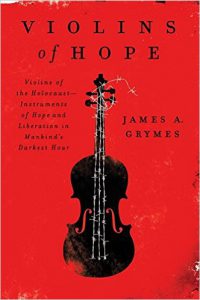 It’s often past belief that I, that I alone
of all the millions who had come to grief,
that I without a scratch climbed from the vale of bones.
At times I can’t imagine it, it’s past belief.

Perhaps I too was burned to ash with all the others,
like them, just like the rest of them, my sisters, brothers,
burned up, burned up like Moses’ bush, his desert thorn,
and out of the hot ashes I arose newborn.

for all who dies in flames or in the poison chamber,
for every child and mother butchered in this war,
all, all, six million lives to be accounted for.*

“For the dead and the living…we must bear witness.” ~ Elie Wiesel 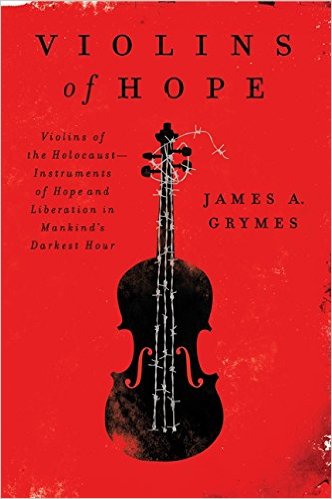 VIOLINS OF HOPE
Violins of the Holocaust – Instruments of Hope and Liberation in Mankind’s Darkest Hour
by James A. Grymes

Tracing the stories of violins played by Jews in the Holocaust, author James Grymes allows the story of each instrument to be a voice and a memorial for the souls of those who played them. These stories raise out of the hot ashes of brutality, unimaginable horrors, and a time of incredible darkness – speaking for those who cannot speak.

Juxtaposing these stories, James Grymes shares the story of Amnon Weinstein whose father Moshe opened a violin shop in Tel Aviv in 1938. After the war, Moshe learned of the death of 400 family members. The pain of that discovery lead to Moshe’s first heart attack and he never again spoke to Amnon of his family.

Amnon grew up to be one of the most respected violin makers in the world and by the 1990’s was ready to reclaim his lost heritage. He began to reflect not only on the Holocaust but the role that music played in the the lives of Jews during that time. Amnon began to locate and restore the violins played by the Jews in camps and ghettos. He is now founder of Violins of Hope Cleveland.**

In the pages of Violins of Hope, James Grymes gives us a glimpse of Holocaust memoirist Elie Wiesel and his interaction with Jewish violinist, Juliek:

On January 19, 1945, after the survivors of Auschwitz III had been taken on a two-day death march to the Auschwitz subcamp of Gleiwitz, Wiesel found himself on top of Juliek in a packed barrack. Later that night, Juliek extricated himself from the pile of living and dead bodies long enough to play a Beethoven concerto on the instrument he had brought with him from Auschwitz III.

“Never before had I heard such a beautiful sound. In such silence,” Wiesel later recorded. “All I could hear was the violin, and it was as if Juliek’s soul had become his bow. He was playing for his life. His whole being was gliding over the strings. His unfulfilled hopes. His charred past, his extinguished future. He played that which he would never play again.”

When Wiesel woke the next morning, he saw Juliek’s lifeless face staring back at him. Next to Juliek was his crushed violin – a fitting symbol of the hundreds of thousands of Jewish lives that had been destroyed in Auschwitz.

Painfully raw, Violins of Hope is a testimony to the strength, perseverance, and hope of the Jewish people. It is a book that haunts the reader long after one has read the last page.

Violins of Hope is available via amazon.com:

Violins of Hope: Violins of the Holocaust–Instruments of Hope and Liberation in Mankind’s Darkest Hour

Violins of Hope – Strings of the Holocaust