A SHOAH MEMORIAL by Keren Hannah

“I will give them an everlasting name which will not be cut off.”
(Isaiah 56:5) 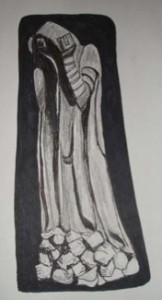 Abba, Father
no more of me
is left to bring to Thee
only the gifts you have given
tallit and tefillin
the lamb and the prayer
remain and help me stand
in You.

Dehumanization
is a gradual process
a breaking down
a stripping away
first the outward trappings
then the inner layers
until all of self melts
into a final desperation
and all one has to offer Heaven
from the soul’s deepest depths
is a nameless
faceless cry.

A MEMORIAL AND A NAME

In 1953, six years after Israel’s rebirth from the Nazi’s flames of death, a special motion was passed in the Knesset (Israeli Parliament) to establish Yad Vashem, a Holocaust memorial site on a hill in the Jerusalem Forest. Yad Vashem means ‘A Memorial and a Name’ and is taken from the Hebrew text, “I will give in my house and within my walls a memorial (yad) and a name (shem)” (Isaiah 56:5). These were the very things that Hitler’s regime aimed to wipe from the world’s consciousness – the memory and the name of the Jewish people. Individuals were tattooed with numbers and rendered faceless and nameless. Communities were uprooted and shattered. The ‘Final Solution’ was devised and implemented to exterminate the Jews as a people, to erase them from memory that they may no longer have a name.

Today, in a vibrant, restored land, Yad VaShem [1] stands as a beautiful and powerful witness to the memory of the six million Jews, more than one third of world Jewry, who were annihilated, and to the thousands of flourishing communities that were destroyed. It is a physical representation of the special flame of memory that is carried in our hearts. Our hope always is anchored in the God of Israel, who promises at the conclusion of the same verse in Isaiah, “I will give them an everlasting name which will not be cut off.”

The need to remember has recently been underscored with the increase in active Holocaust denial. The exaggerated, blatant anti-Semitism and denial of the Holocaust that is rampant in Middle Eastern politics and press is maybe understandable, but it is all the more dangerous when found propagated by Israel’s enemies on Western University campuses and in purportedly academic literature. If this is being perpetrated one generation after the event, with eye-witness survivors still living, what can be expected in another twenty years? We cannot underestimate the value of recording indisputable evidence, and the retelling of the heart wrenching and heroic testimonies of those who were as “brands plucked from the fire” (Zechariah 3:2). 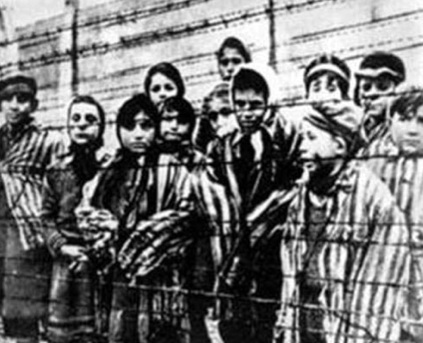 Institutions such as the Holocaust Museum in Washington and Yad VaShem in Jerusalem, preserve and display not only the historical, graphic evidence of the Shoah, but also the art, sculptures and memorial structures that depict the expressions of grief and capture the intrinsic human dignity found in the midst of the suffering. They are unique, urgent voices in the face of the world’s indifference and the traumatized silence of the majority of survivors. We need to see and remember, even though the evidence of the harsh realities of man’s inhumanity to man leaves one emotionally numbed and raises a multitude of inexpressible questions. As we remember we also need to tell, in order that the profound lessons may be learnt and that present dangers are not overlooked and the atrocities repeated. Never again…

Elie Wiesel, world renowned author and Holocaust survivor, wrote in his autobiography, And the Sea is Never Full, of a decision made in Auschwitz:

“I continue to learn – thus to take and give back – to reach out to others, to begin and begin again with every encounter…. Help me Father. Long ago, over there, far from the land of the living [in Auschwitz], we told ourselves that if we were to come out alive, we would devote every moment of our lives to denounce by word and deed the cynicism and silence of mankind towards victims past and future. …The one among us who survived would testify for all of us…His days and nights would be devoted to telling the story. …There were times after the liberation when I saw myself as a messenger carrying only one message: to say no to forgetting. …I continue to teach, to write.”

A special structure stands at Yad VaShem in honor of the almost one million Jewish children who were victims of the Nazi extermination camps. A group of stone pillars, broken off at varying heights, stands outside the Children’s Memorial. At the entrance is a carved portrait of one young boy, Uziel, whose parents agreed that he could represent all those whose names are lost to the world. Passing through the entrance, one enters a darkened maze of glass passages that reflect candle flames. The names of the murdered children that are known have been recorded and are played softly in the silent space. 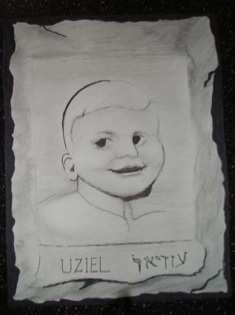 Uziel – “God is my strength” – has a name and a face. Outlived by parents who, with deep and anguished love, have set his fearless smile as a remembrance of the million children whose lives were extinguished.

In the subdued, mirrored maze of their memorial one feels suspended in time and space names of the children are repeated in continuous succession their faces, their souls, are mirrored in the glow of a myriad candle flames reflected into infinity.

The art and poetry of many children, while herded in ghettoes en route to the concentration camps, were somehow saved and preserved, sometimes miraculously. Here is one poem, that of a boy whose name and thoughts live on.

The last, the very last,
So richly, brightly, dazzlingly yellow.
Perhaps if the sun’s tears would sing
Against a white stone…

Such, such a yellow
Is carried lightly ‘way up high.
It went away I’m sure because it wished to
Kiss the world goodbye.

For seven weeks I’ve lived here,
Penned up inside this ghetto
But I have found my people here.
The dandelion calls to me
And the white chestnut candle in the courts.
Only I never saw another butterfly.

That butterfly was the last one.
Butterflies don’t live here,
In the ghetto.

In contrast, this is a poem written in recent years by a young 10th grader in restored Israel, who although free and living in a land that has bloomed like a rose in the desert and is now filled with flowers and butterflies, still asks:

One million, two, three
It is something you can’t see
I ask God why?
Why six million had to die?

Those who survived, I admire.
Did they march like sheep to the slaughter??
All these questions with no answers…
We will remember this forever!

So many questions… The faith of many Jews, even the devoutly religious, was deeply shaken and even lost. Where was God in this inhuman hell? However, these words found on the walls of a cellar where Jews hid from the Nazis in Cologne, Germany, echo the strong deep core of belief in the One God of Israel who, despite the evil perpetrated by man, is constant and faithful and suffers with us in affliction and triumphantly raises dry bones to new life. 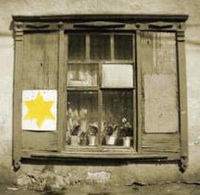 In April of 1951, the Israeli Knesset established the date of 27th Nissan to commemorate as “Holocaust and Ghetto Uprising Remembrance Day”. The date, 8th April this year, occurs during the period of Counting the Omer between Pesach and Shavuot and was selected because it falls between the dates of the Warsaw Ghetto Uprising, which began on the first day of Passover, and the two days (14th and 15th April this year), that commemorate the memory of those who fell in the wars against Israel and the nation’s establishment of Independence, Yom Ha’Zikaron (Memorial Day) and Yom Ha’Atzmaut (Independence Day). While we joyfully celebrate the freedom of the Jewish people restored to Eretz Yisrael, the Land of Israel, we first remember the great sacrifice of the lives that were, and sadly continue to be, mercilessly taken by the enemy.

It is a deep and moving experience to commemorate Yom HaShoa in Israel. As the evening begins, the President of Israel leads a meaningful ceremony of song, prayer and testimony at Yad VaShem, which is attended by the Prime Minister, other dignitaries and a large gathering of guests. In front of the large stone Wall of Remembrance, six survivors of the Holocaust each lights a memorial flame.

The next morning, a siren sounds at a designated mid-morning hour in cities and towns countrywide. As its strident wail fills the air everything comes to a halt. Pedestrians stop in their tracks, traffic comes to a standstill and the occupants alight from their vehicles and stand upright and motionless. For two minutes all is still. Most heads are bowed in remembrance, lips move in prayer, tears fall. As the sound fades and dies, eyes are raised and one feels a deep bond of unity with all Israel in the knowledge that  Am Yisrael Chai. The People of Israel Lives! In spite of enduring the horrors of hell on earth –
Am Yisrael Chai!

IN THE HOME or CONGREGATION:

There are original ways of sensitively acknowledging and commemorating Yom HaShoah personally or as a congregation. Be encouraged to formulate something personal and meaningful in your own particular situation. A few examples:

...God said, “Let us make humankind in our image, according to our likeness…” So God created humankind in God’s image, in the image of God did God create them; male and female created God them. God blessed them..God saw everything that he had made, and indeed, it was very good.

Then He said to me, “Son of man, these bones are the whole house of Israel. Behold, they say, ‘Our bones are dried up, and our hope is lost; we are clean cut off.’ Therefore prophesy, and say to them, ‘Thus says the Lord God: Behold, I will open your graves, and raise you from your graves, O my people; and I will bring you home into the land of Israel.’”

Father, we lift to you those six million of the Holocaust and the myriad slain before and since, even unto this day; we pray for strength and courage to resist the evil that diminishes human beings everywhere because of our prejudice, hatred and fear.
Lord, in your mercy bring your healing and peace and may it begin with us.

We pray for the leaders of all the nations, that their remembrance of past evil and recognition of evil that is present may be so powerful that peace and justice may cover the earth as the waters cover the sea.
Lord, in your mercy, bring your healing and peace, and may it begin with us.

We thank You for those who glorify Your Name in simple, hidden, and faith-filled ways.
Lord, in your mercy, bring Your healing and peace and may it begin with us. 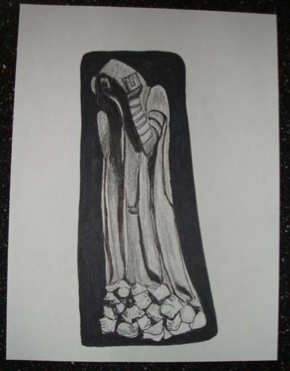 The Kaddish: A Jewish prayer recited by mourners.

Let the glory of G-d be extolled, and G-d’s great name be hallowed in the world whose creation G-d willed. May G-d rule in our own day, in our own lives, and in the life of all Israel, and let us say: Amen.

Let G-d’s great name be blessed for ever and ever.
Beyond all the praises, songs, and adorations that we can utter is the Holy One, the Blessed One, whom yet we glorify, honor, and exalt. And let us say: Amen.

For us and for all Israel, may the blessing of peace and the promise of life be fulfilled, and let us say: Amen.

May the One who causes peace to reign in the high heavens, let peace descend on us, on all Israel, and all the world, and let us say: Amen.

1. Yad Vashem
2. With thanks to their English teacher, and my friend, Carol Wolff

One thought on “YOM HA’SHOAH – A Memorial of the Holocaust”